The following is a list of unnamed moons in the Delta Quadrant.

This M-class moon was located in the same system as Allos's homeworld, orbiting an inward planet. Its atmosphere extended up more than eleven thousand kilometers from the surface.

The moon contained an outpost that was used by Allos' species to synthesize Omega molecules as a power source. An accident in 2374 destroyed the outpost and three hundred square kilometers of the surface; the surviving scientists and the remaining molecules were recovered by USS Voyager. (VOY: "The Omega Directive")

In 2371, a Federation shuttlecraft piloted by Tom Paris was launched from Voyager in the vicinity of this sole moon of Banea. Captain Kathryn Janeway chose this method for she didn't want to get involved in the conflict between the Numiri and the Banea. The smaller ship wouldn't be as easily detected as its mother ship. Paris hid behind the "limb of the moon" before making a break for Banea. By the time the shuttle was detected on the Numiri sensors, it was in the planet's defense perimeter. (VOY: "Ex Post Facto")

In 2375, the USS Voyager hid behind a class 3 moon to remain undetected by Species 8472's Terrasphere 8 during the crew's investigation of the environmental dome. (VOY: "In the Flesh")

A class 6 gas giant could be observed to have at least two moons. (VOY: "Extreme Risk")

A class H moon with an oxygen-argon atmosphere was located in Borg space.

In 2374, while locating a place to drop off Seven of Nine and the other Borg drones inhabiting Voyager, Chakotay selected a class H moon to drop them off at. Due to Seven's intervention, this plan failed. (VOY: "Scorpion, Part II")

This moon orbited a planet surveyed for dilithium deposits by the Delta Flyer in 2376. (VOY: "Memorial")

Drayan II had several moons; one of the outermost ones harbored lush plant life and was known as its Crysata. Its days were at least four hours long.

Tuvok's scans of the Crysata moon showed no lifeforms in a five kilometer radius, suggesting animal life was are or even nonexistent
Two bodies were seen in the sky above the moon serving as the Crysata, and while one of them might possibly be Drayan II, at least one of them was presumably a moon. 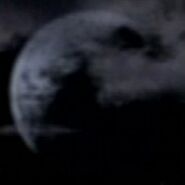 In 2373, the fifth moon of Ilari was where Demmas was massing a fleet of ships for striking back against Tieran duirng a civil war. (VOY: "Warlord")

The Mokra-controlled planet had at least one moon. In 2372, Voyager hid behind the moon in order to avoid detection by the orbital sensor net of the Mokra Order. (VOY: "Resistance")

The Voyager crew visited this moon in 2372 in search of polyferranide. However, they turned out to be contaminated with astilines. It was on this moon that they first found evidence of the Sky Spirits. They had drawn a CHAH-mooz-ee symbol, theorized to be to compensate for making a campfire. (VOY: "Tattoo")

A system visited by Mikhal Travelers were thought to contain at least twenty-one moons, although one was alleged to be a massive space creature. Voyager considered visiting the system in 2373, although out of interest in the asteroids rather then the moons. (VOY: "Darkling")

The sky of an outpost maintained by the Mikhal Travelers contained at least three nearby bodies. (VOY: "Darkling")

Planet 1865-Alpha was observed to have two moon-like objects nearby. (VOY: "Survival Instinct")

This M class moon orbited the fifth planet in a yellow dwarf star system in the Delta Quadrant. Its surface was rocky and foggy, the only life in evidence small patches of brownish grass. What appeared to be small craters or caldera-like depressions were also in evidence.

It was the crash site of the Borg-assimilated starship USS Raven. In 2374, Seven of Nine and Tuvok found the crash site and beamed into the wreckage. (VOY: "The Raven")

The surface was identified as "Ext. Planet Rocky Path" and "Ext. Lunarscape" on the call sheets and was filmed on Paramount Stage 16 with the addition of split screen technique and matte paintings.
These matte paintings included rock textures photographed by Dan Curry years earlier, at Lone Pine in the Alabama Hills. (Amazing Visual Effects",
VOY Season 4 DVD, special feature)
According to the Star Trek: Star Charts (p. 88), this system was named FGC-7861340.

The Talaxian system had several moons, including Rinax. (VOY: "The Haunting of Deck Twelve")

A body was seen in the sky in a holographic recreation of the Paxau Resort on Talax. (VOY: "Alter Ego")

The moon looks consistent with Luna, and given that the holoprogram had been infused with Terran elements, it doesn't seem inconceivable that it indeed was meant to represent Earth's moon.

In 2374, Voyager passed three full moons in a single day. Neelix attributed his and Tom Paris's nightmares to having passed by them. (VOY: "Waking Moments")

These moons, which orbited a gas giant, were explored by USS Voyager in the 24th century. (Star Trek: Voyager, opening credits)

This moon orbited a planet near a nebula. Voyager passed this moon in the 24th century. (Star Trek: Voyager, opening credits)

Retrieved from "https://memory-alpha.fandom.com/wiki/Unnamed_Delta_Quadrant_moons?oldid=2461938"
Community content is available under CC-BY-NC unless otherwise noted.