The following is a list of unnamed Delta Quadrant nebulae.

This nebula was located near the Annari Empire. In 2377, while undergoing a maintenance haul a planet, the Delta Flyer searched for dilithium in this nebula. (VOY: "Nightingale")

This nebula was seen in 2378 in astrometrics aboard Voyager. (VOY: "Homestead")

This nebula, which resembled the aurora borealis, was explored by Voyager in the 24th century. (Star Trek: Voyager, opening credits)

This nebula, located near the Banea homeworld, was viewed from Voyager's viewscreen in 2371. (VOY: "Ex Post Facto")

This nebula was located deep in Borg space and seen by Voyager throughout its time in the heart of Borg space in 2373. (VOY: "Scorpion")

This class 1 nebula was located in the Delta Quadrant. It contained protomatter. In 2374, Voyager sent a shuttlecraft to collect a sample, but Neelix died in the attempt. While he was brought back to life due to Seven of Nine's nanoprobes, he suffered psychological trouble. He later attempted to transport to the location inside the nebula where he died, but was stopped by the bridge crew. (VOY: "Mortal Coil")

This class 2 nebula was located in the vicinity of space where Voyager was pursuing the USS Equinox in 2376. (VOY: "Equinox, Part II")

This class 3 nebula was located held intact by a subspace vacuole near its center, acting as a gravitational anchor.

In 2375, the nebula was located 300,000 kilometers from the Varro generational ship that Derran Tal lived aboard. She watched it on sensors, but wished to see it with her own eyes. Some time later, she and Harry Kim secretly visited this nebula using one of Voyager's Class 2 shuttles. (VOY: "The Disease")

In an alternate timeline, Voyager took refuge in this class 9 nebula to conduct repairs during its Year of Hell, however, shortly after it did, it was discovered the properties of the nebula were not conducive towards their efforts.

Captain Janeway decided to leave the nebula because she wanted to get back into open space to find allies and put together a fighting force to take on Annorax's temporal weapon ship. This timeline was negated by the weapon ship's erasure from history. (VOY: "Year of Hell, Part II")

This class 17 nebula, initially described as a gaseous anomaly, was encountered by Voyager in early 2373.

Apart from the typical amounts of hydrogen and helium, this nebula also had an unusually large amount of sirillium, seven thousand parts per million.

To the naked eye, it was very similar in appearance to the class 11 Azure Nebula near Klingon space, though technically it was very different. (VOY: "Flashback")

This class K nebula was located in the Delta Quadrant. In 2376, Voyager went twenty-five light years off course to starboard to explore this nebula at the request of Commander Chakotay. However, they were diverted from it when they made contact with Tash. (VOY: "The Voyager Conspiracy")

This was a Mutara class nebula located in Devore space. (VOY: "Counterpoint")

In 2372, Voyager avoided traveling through this emission nebula, even though Tom Paris believed it would save time. (VOY: "Lifesigns")

This nebula, which resembled a galaxy, was seen in the distance as Voyager passed it in the 24th century. (Star Trek: Voyager, opening credits)

This nebula was located in grid 986 of the Delta Quadrant and contained a transwarp hub. With the assistance of Admiral Janeway from an alternate future, Voyager destroyed the hub and returned to Earth. (VOY: "Endgame")

This nebula was the site of a battle in 2372 between Voyager, taken over by the Kazon-Nistrim, and Talaxian ships originating from the colony at Prema II. The Talaxian forces used the nebula to their tactical advantage, retreating into it after their attack. Voyager, with its crew back, later went to maximum warp while in this nebula in 2373, thus moving beyond the Kazon Collective. (VOY: "Basics, Part II")

In 2377, during Iden's Rebellion, Iden hid the Hirogen holoship in this nebula. Radiation from the nebula prevented the Hirogen from detecting the holoship. Voyager and the Hirogen quickly followed them into the nebula. (VOY: "Flesh and Blood")

After her death, Ahni Jetal was fired towards this nebula. (VOY: "Latent Image")

This nebula was located 9,500 light years from Borg space. The Voyager reached this nebula in 2374 when Kes moved it ten years closer to Earth. (VOY: "The Gift")

This nebula, containing several planetoids, was first encountered when Chakotay and Tuvok returned from a trade mission in 2371. The non-corporeal Komar considered it their domain. (VOY: "Cathexis")

According to the Star Trek: Star Charts (p. 83), the nebula was named the Komar Nebula.

Star map of the nebula, overlayed on a feed of a medicine wheel; circled are three planetoids 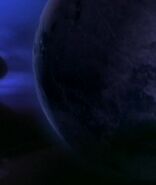 A planetoid in the nebula

This nebula was located in the Delta Quadrant of the Milky Way Galaxy.

In 2374, while introducing astrometrics aboard Voyager, the monitor displayed this nebula. (VOY: "Year of Hell")

This nebula became subject of The Doctor's holo-photography while he piloted the Delta Flyer. When the shuttle later encountered a subspace eddy, The Doctor suggested that it was probably just the gravimetric shear coming from the nebula. (VOY: "Renaissance Man")

This nebula was toxic to most humanoids, was 110 light years across, and sixty thousand light years from Earth. It would take an Intrepid-class starship one month to travel through it and one year to travel around it at maximum warp. In 2374, Voyager put its crew in stasis and went through the nebula in a month-long journey. (VOY: "One")

Nebula beyond The Void

This nebula, containing numerous star systems, was explored by Voyager in 2375. (VOY: "Night")

This nebula was located relative to the Ocampa system and identified as being seventy-five thousand light years away from Federation space.

When Voyager began its journey back to home in 2371, it traveled through this nebula when it went to maximum warp. (VOY: "Caretaker")

Following an incident with the Borg Collective, Voyager passed by this nebula at sublight speed. (VOY: "Dark Frontier")

In 2375, The Voyager crew mounted an astronomical survey that witnessed the spontaneous emergence of a proto-nebula.

Located near the Alpha Quadrant side of the region known as The Void, it was observed expanding very quickly, as if it had a mind of its own. At one point it was expanding at a rate of eight thousand cubic kilometers per hour, and for a time the failure of the crew to predict the expansion rate seemed like it might force the survey to be aborted. The phenomenon was so volatile that not even a Borg cube would be able to last ten seconds in it. Early on in the survey, Voyager lost a Class 2 shuttle to a gravimetric shear. The proto-nebula also gave off plasma surges. (VOY: "Drone")

This nebula was located near a planet and its moon.

Voyager flew through this nebula at warp at some point in the 24th century. (Star Trek: Voyager, opening credits)

This nebula was located near the junction of underspace corridors 39 and 875. It contained a planet that Gedrin proposed to be the new homeworld of his species in 2376. (VOY: "Dragon's Teeth")