This male served as the ambassador for Denobula on Earth in the year 2154.

Following the kidnapping of Doctor Phlox by the Rigelians, T'Pol contacted the Denobulan ambassador to notify him of the situation. The ambassador, in turn, notified Phlox's wives. (ENT: "Affliction")

This female served as the ambassador for Denobula on Earth in the year 2155.

She attended the Coalition of Planets talks alongside representatives of the Vulcans, the Andorians, the Tellarites, and other aliens. During the talks, she witnessed John Frederick Paxton's crimes against the aliens. (ENT: "Demons", "Terra Prime")

This character was played by regular background actress Nikki Flux, who received no credit for her appearance.

This female was the pilot of the Barzai, who was captured by the Augments in 2154. She was later rescued by Enterprise NX-01. (ENT: "Cold Station 12", "The Augments")

The Barzai's pilot was played by Amy Wieczorek.

In 2381, a pair of researchers were examining plant life on Frylon IV. While comparing raktajino to Human coffee, the two were attacked by a mugato, causing them to puff their face as a defense mechanism before running away to notify the authorities. (LD: "Mugato, Gumato") 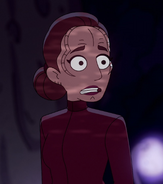 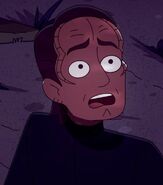 As of 2152, this family consisted of at least thirty-one members, including three wives, each possessing two husbands in addition to Phlox himself, and five of Phlox's children. He missed all of them while serving on Enterprise NX-01, but wouldn't have given up his opportunity to serve there, via the Interspecies Medical Exchange, for anything. (ENT: "A Night in Sickbay")

In the writers' first draft script of "Dear Doctor", Phlox's family was said to be comprised of twenty-seven individuals, including the offspring.

Phlox's eldest son was a potter. His father noted that he lived in the same town as his mother, where he created beautiful pottery. (ENT: "A Night in Sickbay")

Phlox's middle son, like his younger brother Mettus, had not spoken to Phlox in years prior to 2152, due to an undisclosed disagreement. (ENT: "A Night in Sickbay")

Phlox also had two daughters, one of whom was a biochemist, while the other was a surgeon. Phlox was proud that they had both gone into the medical field. (ENT: "A Night in Sickbay")

This character was only mentioned in dialogue.
In the writers' first draft script of "Dear Doctor", Phlox's offspring were established as all being fully grown (as of the episode's setting, in 2151) and Phlox himself stated, "I'm quite proud of how most of them turned out."

Phlox's fifth grandmother prepared the same soup recipe for each of his weddings. He mentioned this to T'Pol when he had some in 2154, explaining that Chef tried to make it, but could never get it quite right. (ENT: "Doctor's Orders")

Having lived through the last war, one of Phlox's grandmothers still harbored prejudice against the Antarans, to the point of forbidding Phlox to visit an arboreal planet near their star system with some friends. Because Antarans had once lived there, she believed it to be unclean years later.

Phlox remembered laying in bed as a child, thinking about her stories, and having nightmares, afraid of an Antaran climbing into his window.

When he grew up, he never told his children her stories, opting for the truth over propaganda. He was proud to say that all of his children, save his son Mettus considered her beliefs to be outdated.

In 2152, Phlox related this story to Hudak, in hopes that the Antaran would accept medical treatment from him. (ENT: "The Breach")

This character was only mentioned in dialogue.
This grandmother and the one above may be the same individual.

Phlox's spouses and their spouses

Along with Phlox, his spouses were each married to two other men each, who were, in turn, married to Feezal and other women. One of Phlox's wives lived in the same town as his eldest son. (ENT: "A Night in Sickbay")

These characters were only mentioned in dialogue.
In the writers' first draft script of "Dear Doctor", Phlox was referred to as having two wives, each of whom had three husbands. Evidently, this later changed to Phlox's wives ultimately being established as instead having two husbands each.