This type of starship was used by Starfleet during the mid-22nd century. The primary hull was triangular in shape, and had two nacelles mounted port and starboard angled upward from and slightly above the hull.

These vessels were equipped with forward and aft phase cannons. (ENT: "The Expanse", "Twilight")

In an alternate 2165 this type of vessel was included in the Earth convoy destined to settle on Ceti Alpha V. (ENT: "Twilight") 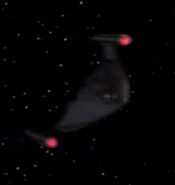 This type of starship was used by Starfleet during the mid-22nd century. The primary and secondary hull of this class were connected via the nacelles, which were directly attached to the primary hull and via pylons to the secondary hull. (ENT: "Storm Front, Part II")

The CGI model of the Delta-shaped hull-class ship was designed by John Eaves and actually started out originally as the "back end" of the Emmette-type warp ship model seen flying above Luna during the opening credits of the Star Trek: Enterprise, and was constructed as such at at Foundation Imaging.

During the second season, Eaves was called upon to modify his original design. The final draft script of "The Expanse" called for "warp two ships". Visual Effects (VFX) Supervisor Robert Bonchune clarified, "The next season when we needed some "older" starships (than NX-01), John Eaves went ahead and truly finalized the complete shape as was seen in the episodes. However, since this was considered a more advanced production version, the "back end" old style rocket exhausts were deleted and replaced with more "advanced" 'nurnies' and 'greebling'." [1] Bonchune described the inspiration of this design as "a kind of Romulan/Federation hybrid." [2]

Bonchune's "Romulan/Federation hybrid" remark actually harkened back (or foreshadowed from an in-universe POV) to a remark Commander Hansen made, when he described an attacking Romulan Bird-of-Prey, designed along very similar lines. In a shot, but deleted scene from TOS: "Balance of Terror", Hansen stated, "You see it, Enterprise?! Starship design. Warn Earth...(STATIC CRACLE)...espionage, stolen our designs...traitors..." (Revised final script draft, July 18, 1966, Scene 46, p. 17; [3])

It was during its modification at Foundation's successor, Eden FX that this type of vessel became referred to by its VFX team as the "Warp Delta." Additional views could until 2013 be found at the Drex Files(X). As "Warp Delta" – indicative of the official franchise also accepting the hitherto unofficial behind-the-scenes designation – the model became in 2016 prominently featured in and on issue 82 of the Britsh partwork publication Star Trek: The Official Starships Collection.

In Christopher L. Bennett's novel Uncertain Logic, the "Delta-shaped hull-class" ship is referred to as the Ganges-class (β).