These five Enaran cadets and Korenna Mirell were awarded with the Citizenship Award because of their loyalty to their people. Later, the cadets witnessed the execution of Dathan Alaris and Fredik, and applauded after the thermal sweep was finished. (VOY: "Remember") 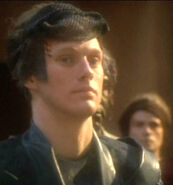 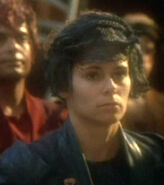 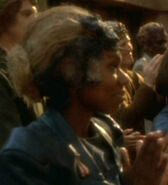 Played by Brian Hall
Add an image to this gallery

These three Enaran children were part of the memories transferred to B'Elanna Torres by Korenna Mirell concerning the resettlement of the Regressives. During this memory, the first girl asked what happened to the Regressives. She was told that they were disruptive people who refused to assimilate with society and were moved to another territory. She was also told that they fought and destroyed themselves. In reality they were exterminated by a thermal sweep. (VOY: "Remember")

The three child actors filmed their scene on Friday 26 July 1996 on Paramount Stage 16 and are listed as "Girl" and "Enaran children" on the call sheet. 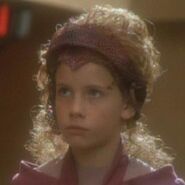 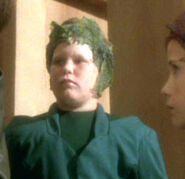 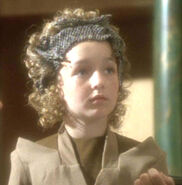 Played by B. Johnson
Add an image to this gallery

These civilians were present when the Citizenship Award was given to Korenna Mirell and during the execution of the Regressives Dathan Alaris and Fredik. (VOY: "Remember")

Dathan's uncle and his family

The Dathan Alaris' uncle and his family were resettled and no one had heard from them in the two months since. (VOY: "Remember")

This uncle's family was only mentioned in dialogue.

These Regressives witnessed the execution of Dathan Alaris and Fredick by a thermal sweep. (VOY: "Remember")

These two Enaran soldiers guarded the ceremony of the Citizenship Award when Korenna Mirell was awarded by her father, Jareth. They later controlled some of the Regressives but were unable to stop Fredik, who attacked Mirell and wounded her.

During the following execution of Dathan Alaris and Fredik, they guarded the use of the thermal sweep. (VOY: "Remember")

The costume worn by Paul Seymore was later sold off on the It's A Wrap! sale and auction on eBay. [1] 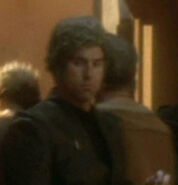 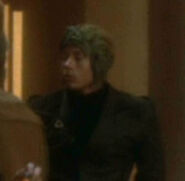 Played by Paul Seymore
Add an image to this gallery
Retrieved from "https://memory-alpha.fandom.com/wiki/Unnamed_Enarans?oldid=2254738"
Community content is available under CC-BY-NC unless otherwise noted.