The Enolian guard was on the prison transport that was taking Archer and Tucker to the Canamar prison camp. When Archer tried to ask him questions, he inflicted pain on him with pain receptors in his handcuffs. He was knocked out by a Nausicaan prisoner and was himself put in the pain receptor cuffs. (ENT: "Canamar")

The Enolian guard was portrayed by Brian Morri.

The second Enolian guard was stationed in the cockpit of the prison transport. When Kuroda Lor-ehn and the Nausicaan inmate escaped, he was shot by Kuroda as he attempted to aid the other guard. (ENT: "Canamar")

This Enolian guard was played by stunt actor Chester E. Tripp III, who received no credit for his performance.

This man was working at a transport yard on Keto-Enol with his son Kuroda Lor-ehn when the son was arrested for a crime he didn't commit. Kuroda felt he learned more in prison than his father could have taught him. (ENT: "Canamar")

This Enolian was only mentioned in dialogue.

This official was contacted by T'Pol concerning the arrest of Archer and Tucker. He explained that they were arrested, mistaken for smugglers. He contacts the prison transport and ordered them released. But before they could be released the transport was hijacked by one of the prisoners. He informed T'Pol that his government had given orders to destroy the ship, and if she wished to save Archer and Tucker, she had to reach them first. After the successful rescue of Captain Archer and Commander Tucker, the Enolian official tried to explain the situation and excused himself, but Captain Archer left him without accepting the excuses. (ENT: "Canamar")

The Enolian official was portrayed by Holmes R. Osborne.
In the final draft script of "Canamar", he was described as wearing "a uniform similar to the Guards' on the transport, but a bit more elaborate."

The pilot was the helmsman of the prison transport ship that Jonathan Archer and Trip Tucker were imprisoned on. During an escape attempt, he was knocked unconscious by the Nausicaan prisoner as he attempted to seal off the cockpit of the ship. (ENT: "Canamar")

The Enolian pilot was portrayed by stunt actor Steve Blalock who received no credit for his appearance.
As evidenced by the final draft script of "Canamar", the Enolian pilot's head was initially intended to glance off the helm, though he is instead thrust into a bulkhead by the Nausicaan in the final version of the episode.
His uniform was altered for this episode and was previously worn by a Mokra Order soldier in the Star Trek: Voyager episode "Resistance" and later by Steve Rankin in the episode "Demons". It was sold off on the It's A Wrap! sale and auction on eBay. [1]

Five prisoners were transported on the prison ship and should be imprisoned in the Canamar penal colony. They were held with handcuffs and later rescued by the crew of Enterprise. (ENT: "Canamar")

All five prisoners were played by background performers who received no credit for their appearances. 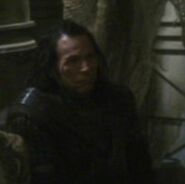 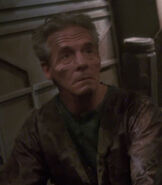 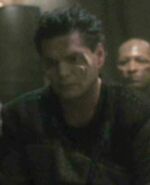 This Enolian was only mentioned in dialogue.
Retrieved from "https://memory-alpha.fandom.com/wiki/Unnamed_Enolians?oldid=2399289"
Community content is available under CC-BY-NC unless otherwise noted.