In mid-2366, this starship transported Vice Admiral Anthony Haftel from Galor IV to rendezvous with the USS Enterprise-D in Sector 396 in order to transport Lal back to Starfleet Research. (TNG: "The Offspring")

Haftel's ship was a reuse of the ship depicting the USS Repulse in the synonymously-named TNG episode entitled "The Child". From a scene omitted from the script, it was implied that the ship was under Haftel's command, as he was in the captain's chair. The filmed version of this scene simply showed the two vessels (as pictured), as to indicate the admiral's arrival.

On stardate 43997.6, this starship transported Admiral J.P. Hanson and Lieutenant Commander Shelby to rendezvous with the USS Enterprise-D at Jouret IV to review the disappearance of the New Providence colony.

After confirming the disappearance of the colony was a result of a Borg attack, Hanson returned to Starbase 324 aboard this vessel to discuss strategy with Starfleet Command. (TNG: "The Best of Both Worlds")

This ship was described in the script as a "transport class," indicating that no specific vessel was intended to be used for this appearance. It may presumably be the same vessel as Hanson's starship.

In late-2367, this starship transported Vice Admiral Thomas Henry to rendezvous with the USS Enterprise-D, where Henry was to observe a hearing conducted by Norah Satie and Jean-Luc Picard. (TNG: "The Drumhead")

The footage of this ship was also a reuse of the USS Hood from "Encounter at Farpoint". The ship itself was not described in the script.

In the mid-24th century, three ships of this class were assigned to Sector 21528 after the Cardassian Central Command announced its intentions to annex the Minos Korva system, in Sector 21527, and install orbital outposts around three planets in the system. These assignments complemented a response from the Federation government to the Cardassian plans. (TNG-R: "Chain of Command, Part II")

These ships were only mentioned in writing.

In early 2372, these two starships, accompanied by the USS Venture and the USS Trial, were part of Admiral Hastur's task force that arrived at Deep Space 9 to assist the space station against the Klingons during the first Battle of Deep Space 9. The two ships later remained on patrol near the station following the Klingon withdrawal. (DS9: "The Way of the Warrior")

These same ships later visited Deep Space 9 in 2373. (DS9: "Doctor Bashir, I Presume") They were also among the first ships to arrive at Deep Space 9 after the Dominion retreat, following Operation Return. (DS9: "Sacrifice of Angels")

A portion of Gilhouly's task force

During the Romulan arrival

In mid-2373, these two starships, accompanied by three Miranda-class starships, were part of Admiral Gilhouly's task force that arrived at Deep Space 9 to assist the space station against the Dominion threat, shortly after they entered the Alpha Quadrant and were joined by the Cardassian Union. (DS9: "By Inferno's Light")

These same ships were also present for the Federation's counter strike at the first Battle of Chin'toka in late 2374. (DS9: "Tears of the Prophets")

This starship was stationed at Deep Space 9 when Dukat arrived at the station aboard Dukat's battle cruiser. (DS9: "Ties of Blood and Water")

...in the Second Fleet

In late 2373, these starships were among those assembled as the Second Fleet.

While the Dominion attacked Deep Space 9, during the second Battle of Deep Space 9, these ships crossed the Cardassian border and destroyed the Dominion shipyards on Torros III. These ships later joined with the USS Defiant and IKS Rotarran, following the evacuation of DS9, for a counterattack against the Dominion forces. (DS9: "Call to Arms")

These two starships, along with six Miranda-class starships, were on patrol near Starbase 375, while the USS Defiant was stationed there, early during the Dominion War in 2374. Other ships present during those periods included the IKS Rotarran, USS Defiant, and USS Centaur. (DS9: "Sons and Daughters", "Behind the Lines")

Two Excelsiors, the USS Defiant and the IKS Rotarran

Two Excelsiors, the Defiant, and six Mirandas
Add an image to this gallery

These starships gradually came together, composed of elements from the Second and Fifth Fleets at the starbase, in order to prepare to retake Deep Space 9. (DS9: "Favor the Bold", "Sacrifice of Angels")

These two starships, along with five Miranda-class starships we on patrol near this Federation starbase where Quark's cousin Gaila was imprisoned. (DS9: "The Magnificent Ferengi")

These starships, including the USS Hood and USS Valley Forge, were involved in the first Battle of Chin'toka in late 2374. (DS9: "Tears of the Prophets")

In 2375, these three starships, belonging to the Ninth Fleet, were patrolling near Deep Space 9 during the departure of General Martok's cavalry group. (DS9: "Once More Unto the Breach")

In 2375, numerous of these starships departed Deep Space 9 for the Invasion of Cardassia. One was among the first ships to be destroyed by the Dominion in that battle. (DS9: "What You Leave Behind") 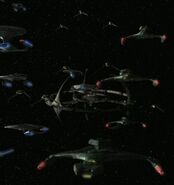 An Excelsior class is destroyed in the Battle of Cardassia

In 2378, this starship was stationed near a dilithium processing facility in the Alpha Quadrant. (VOY: "Author, Author")

Retrieved from "https://memory-alpha.fandom.com/wiki/Unnamed_Excelsior_class_starships?oldid=2387307"
Community content is available under CC-BY-NC unless otherwise noted.