Believing the creature was almost dead, they brought it onto their vessel where it attacked both Hirogen, killed the Beta, and seriously wounded the Alpha.

The Alpha was discovered by an away team from the USS Voyager who found him sitting with a loaded weapon and serious internal bleeding in a chair behind a closed door. He was transported into sickbay aboard the Voyager where he resisted getting treated by The Doctor. But after a conversation with Captain Janeway, he agreed to get treated.

Unknown to the crew of the Voyager and the Alpha-Hirogen, the member of Species 8472 boarded the Voyager. When the Alpha assisted to hunt the creature, he accompanied Commander Chakotay and Tom Paris onto deck 11 where they found it. The Alpha seriously injured the Species 8472 member, attacked Chakotay and shot at Paris before Seven of Nine was able to overwhelm him.

Demanding to kill his prey, the Alpha was held behind a force field in sickbay but was able to break free and overwhelm the two security officers guarding him when a group of six Hirogen vessels arrived. The Alpha again attacked the member of Species 8472 and the two fought a hand-to-hand combat before Seven of Nine beamed the two aboard one of the Hirogen vessels which retreated. (VOY: "Prey")

This Alpha-Hirogen was played by actor Tony Todd and his stunt double Scott L. Schwartz.
Todd filmed his scenes on Thursday 30 October 1997 and between Monday 3 November 1997 and Friday 7 November 1997 on Paramount Stage 9 and 16 and is listed as "Alpha" on the call sheets. His head mold was later sold off on the It's A Wrap! sale and auction on eBay. [1] Schwartz filmed his scenes on second unit on Friday 21 November 1997 on Paramount Stage 9 and is listed as "Stunt Hirogen" on the call sheet. He had a makeup call at 9:00 am and a set call at 12:00 pm.
The Star Trek Customizable Card Game gives his name as Karon.

This Alpha-Hirogen assisted as a medic The Doctor in treating the crew of Voyager, who were being used as prey in holoprograms used by the Hirogen. He was more interested in implanting the neural interfaces that kept the crew from knowing who they were, in order to keep them under control, than healing the wounded. The Doctor admonished him for his poor work in treating the injuries of the crew, stating that one crewmember he treated returned with internal bleeding. (VOY: "The Killing Game", "The Killing Game, Part II")

The Hirogen medic was played by actor Mark Metcalf.
The Star Trek Customizable Card Game gives his name as Jorik.

In 2377, this Alpha-Hirogen commanded a Hirogen vessel that responded to a distress call from a Hirogen training facility where all but one of the Hirogen had been attacked and killed by holograms from Iden's Rebellion. When he discovered the Voyager responding to the distress call as well, he initially demanded that they leave but later agreed to work with them to locate the hologram's vessel.

Upon locating what appeared to be the their ship, the Alpha-Hirogen eagerly moved in for the kill. It was not their ship, however, but an unmanned ship disguised and placed as a trap for the Hirogen. Once the Alpha's ship was close enough, the drone exploded, disabling the ship and killing the Alpha and most of his men. The title of Alpha would be passed to his Beta. (VOY: "Flesh and Blood")

After the death of his Alpha-Hirogen, this Beta-Hirogen assumed the title of Alpha and resumed the hunt for the renegade holograms. He was much less agreeable than his predecessor and blamed Donik for the deaths of the Hirogen at the training facility and the Voyager for having given them what he believed to be faulty holographic technology. Accordingly, he was also more reluctant to work with the Voyager crew in locating the holograms. After the hologram threat was neutralized, the new Alpha told Captain Kathryn Janeway that she and her crew would have made worthy prey. (VOY: "Flesh and Blood")

This Beta-Hirogen hunted with Idrin aboard his warship when they captured Tuvok and Seven of Nine, who were accessing their communications array. He was able to locate the Voyager forty-thousand ketric away from their relay station and was told to go to stalking mode for their hunt. He objected suggesting they wait for the other three ships before engaging the Voyager but was told to obey by Idrin.

When told to prepare Seven and Tuvok for the kill, he again objected wanting to wait for the other ships to capture the Voyager. He was told not to question the Alpha again. Later, he, Idrin, and their ship were sucked into a black hole, but not before Seven and Tuvok were transported back to the Voyager. (VOY: "Hunters")

This Beta-Hirogen was played by actor Roger Morrissey who filmed his scenes on Tuesday 28 October 1997 on Paramount Stage 16.
His suit was built by Makeup & Effects Laboratories with a makeup call at 5:30 am. [2]
The Star Trek Customizable Card Game gives his name as Ranjen.

This Beta-Hirogen along with his Alpha-Hirogen hunted a member of Species 8472. He wanted to destroy the ship that the prey was on, but the Alpha overruled, wanting to finish the hunt. The hunter tracked the prey to an asteroid belt. He and the Alpha followed the prey into the caves of an asteroid it had landed on, cornered it and shot it. Believing it dead, he and the Alpha transported it aboard their ship. But the member of Species 8472 attacked them, decapitated and killed the Beta. (VOY: "Prey")

This Beta-Hirogen was played by actor Clint Carmichael.
He was identified as Beta on the call sheets and filmed his scenes on Tuesday 4 November 1997 and Wednesday 5 November 1997 on Paramount Stage 16. Carmichael also played another Hirogen in this episode.
The Star Trek Customizable Card Game gives his name as Vurond.

This Beta-Hirogen was the subordinate of his Alpha medic, and actively participated in the World War II simulation on the holodeck of the USS Voyager, charged with collecting both the wounded Hirogen and Voyager crewmembers. For the simulation the Hirogen was decked in an SS uniform, carrying the rank of Oberscharführer. As the simulation got out of hand, spilling over outside the holodeck, fighting intensified, and he sustained minor injuries. While he received treatment in sickbay, he was ordered by his Alpha to concentrate his efforts on the Hirogen only, and to leave the Voyager crew where they fell. (VOY: "The Killing Game", "The Killing Game, Part II")

This Hirogen was played by background actor Richard Bishop.
The Star Trek Customizable Card Game gives his name as Davar. [3]

This Beta-Hirogen served aboard the Hirogen vessel that responded to the distress call from the Hirogen training facility overrun by renegade holograms. (VOY: "Flesh and Blood")

This Hirogen was played by Michael Wiseman.

The assimilated Hirogen was a personality assumed by Seven of Nine when a Borg vinculum caused her to develop a multiple personality disorder. (VOY: "Infinite Regress")

This Hirogen was played by an unknown performer.

This Hirogen was a member of the resistance movement against the Borg Queen at Unimatrix Zero in 2377, led by Axum. He was able to visit the virtual world the drone had set up and be free from the hive mind. Along with the rest of the individuals he prepared to fight against the invading Borg drones. (VOY: "Unimatrix Zero, Part II")

This Hirogen was played by an unknown actor.

This Hirogen hunter contacted the Voyager upon arriving and requested their prey, a member of Species 8472, and their fellow hunter otherwise he would attack the Voyager. When Janeway tried to negotiate and denied his request, he led the attack on the Voyager.

He withdrew along the other ships when the Alpha-Hirogen and the member of Species 8472 were beamed aboard one of the Hirogen vessels by Seven of Nine. (VOY: "Prey")

This Hirogen was played by actor Clint Carmichael who previously played the Beta-Hirogen in the same episode.
Carmichael filmed this scene on Tuesday 4 November 1997 on Paramount Stage 16 and is listed as "11A - Hirogen Hunter" on the call sheet.

This young Hirogen was a member of a Hirogen hunting party that captured Voyager and hunted the crew in various holodeck programs.

He confronted Harry Kim in the mess hall and accused him of sending a hidden message. Kim was able to talk himself out of this scenario after he was pushed to the ground by the Hirogen. (VOY: "The Killing Game")

After the deaths of Karr and Turanj, the young Hirogen agreed to a cease fire. Although he did not share Karr's interest in pursuing holographic technology as an alternative to the hunt, he ultimately accepted Captain Janeway's offer of a sample of their technology and agreed to release the Voyager. (VOY: "The Killing Game, Part II")

This Hirogen was played by actor Paul S. Eckstein. Eckstein later played another Hirogen in "Flesh and Blood".
The Star Trek Customizable Card Game gives his name as Takirac.

In 2377, this Hirogen hunter hunted holograms on a training facility where Donik served. He apparently served as a mentor for younger Hirogen hunters. When the facility was raided by member of Iden's Rebellion, he took a younger hunter and attempted to track the holograms. They were both killed soon after, however, along with forty-one other Hirogen. (VOY: "Flesh and Blood")

This Hirogen hunter was played by Todd Jeffries. He was credited as "Hirogen #1".
The Star Trek Customizable Card Game gives his name as Harkan.

This young Hirogen hunter accompanied an elder hunter in tracking renegade holograms which had infiltrated their facility. Both were killed by Weiss and other holograms when they were ambushed. (VOY: "Flesh and Blood")

This Hirogen hunter was played by Chad Halyard. He was credited as "Hirogen #2".

This Hirogen hunter ruthlessly hunted holograms at one of the Hirogen training facilities. One of the holograms he hunted later became part of Iden's Rebellion and their memory files of being hunted by this Hirogen where transferred by Iden and Kejal to The Doctor's program to show him how they had suffered at the hands of the Hirogen. (VOY: "Flesh and Blood")

This Hirogen hunter was played by Don McMillan. He was credited as "Hirogen #3".
The Star Trek Customizable Card Game gives his name as Konuric.

These three hunters controlled Voyager under the command of Karr in 2374. They participated in several holoprograms where they hunted down the crew of Voyager and also operated the consoles on the bridge. The first Hirogen guarded Harry Kim when he and Ashmore had to repair controls in a corridor and also brought another wounded Hirogen into sickbay. 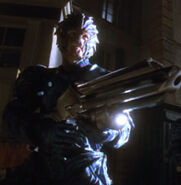 Played by Fred Romming
(VOY: "The Killing Game, Part II")
Add an image to this gallery

The fighter was a combatant in the deadly sport called Tsunkatse. He and his son were captured by Penk in 2357, during his son's first hunt.

In 2376, Seven of Nine was forced to take part in the game and the Hirogen fighter became her mentor, showing her how to fight and defend herself. When she was entered in a red match, she learned that the Hirogen was her opponent. He explained that he trained her so she could kill him and give him an honorable death. Voyager discovered the location of the match, and rescued Seven along with the Hirogen and arranged for a Hirogen ship to pick up the hunter. (VOY: "Tsunkatse")

The Hirogen Tsunkatse fighter had a son who was captured during his first hunt, along with his father, by Penk in 2357. However, he was deemed "too small" for the ring and released, while his father remained in captivity. (VOY: "Tsunkatse")

Retrieved from "https://memory-alpha.fandom.com/wiki/Unnamed_Hirogen?oldid=2540447"
Community content is available under CC-BY-NC unless otherwise noted.