List of unnamed Humans in the 23rd century of the alternate reality.

This hovercruiser-riding Iowa cop attempted to apprehend a young James T. Kirk in the 2240s after Kirk stole his stepfather's Corvette.

He only caught up with Kirk after the Corvette fell into a quarry, and Kirk nearly fell with it. (Star Trek)

The Iowa cop was portrayed by stunt actor Jeremy Fitzgerald. His voice was provided by the film's director, J.J. Abrams, although it was altered.
When the scene was originally shot, Fitzgerald's face was visible to the audience, but Abrams decided to digitally add a mask in post-production to hide the character's face. (Star Trek DVD commentary)

James T. Kirk's stepfather was angry at Kirk for stealing his Corvette in the 2240s. He was married to Winona Kirk, and was responsible for much of James' upbringing in Riverside, Iowa. (Star Trek)

Kirk's stepdad was unseen in the film, but his voice over the Nokia phone was provided by Greg Grunberg (J.J. Abrams' "good luck charm").
Kirk's stepfather replaced the concept of Kirk's uncle Frank, an alcoholic, abusive man played by Brad William Henke in scenes deleted from the film.
The novelization of Star Trek essentially merges the characters, making the abusive adult the stepfather and giving him the name Frank.

When James T. Kirk and Leonard McCoy met in 2255, McCoy was recently divorced from his wife. He exaggeratedly stated that she "got the whole planet" in the settlement, prompting his decision to sign up for Starfleet. McCoy's comment that "all she left me was my bones" ultimately inspired his new nickname, "Bones". (Star Trek)

This character was only mentioned in dialogue.
The ex-wife might have been the mother of Joanna McCoy. See also:

This female sat at the counter in a San Francisco bar when James T. Kirk noticed her following his demotion. When he tried to flirt with her, he was interrupted by Christopher Pike who placed himself between the two. (Star Trek Into Darkness)

This woman was played by Melissa Paulo.

These civilians were residents of San Francisco in 2259. They witnessed explosions when Khan Noonien Singh ran away from Spock. Khan hit several of the civilians and they fell on the ground. (Star Trek Into Darkness)

The civilians are played by background performers and stunt performers. The resume of LaRaine Fisher and information from Bill Blair identified the scene which they were in as being in Chelsea, although San Francisco does not currently have a district of that name. This is backed up by production artwork which identifies the site on which Khan jumps onto the garbage scow as the "Highline Park" in Chelsea. (Star Trek Into Darkness Blu-ray, special feature "Brawl by the Bay")

These San Francisco residents witnessed the crash landing of the USS Vengeance into the harbor and the city in 2259. Many of them were killed. (Star Trek Into Darkness)

Marc Primiani is listed among the "San Francisco Residents" in the end credits of the film, though he was not part of the crash scene (see: Archive officer). 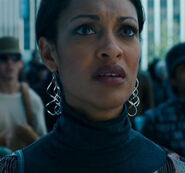 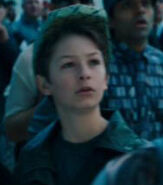 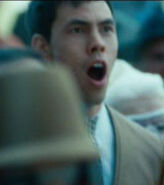 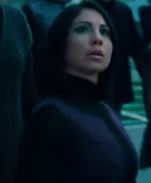