The captain was the commander of an Illyrian starship that was heavily damaged by an anomaly field in the Delphic Expanse. Enterprise NX-01 had received a distress call from the vessel, and hoping that each ship might be able to help the other, Jonathan Archer met with the Illyrian captain. When Archer proposed to trade a warp coil from the Illyrian ship for trellium-D to protect against the anomalies, the Illyrian captain refused. Without a warp coil, it would take three years for his vessel to reach the Illyrian homeworld and they might not survive the journey.

Archer and an away team boarded the Illyrian vessel a short time later and stole the warp coil, leaving behind extra food, supplies and trellium-D as compensation. The Illyrian captain confronted Archer and asked how he could do such a thing. Archer responded that he had no choice. (ENT: "Damage")

The Illyrian captain was played by Star Trek: Deep Space Nine recurring actor Casey Biggs.
Parts of his costume, the leather harness, was previously used for the Mokra Order soldiers in the Star Trek: Voyager episode "Resistance". It was sold off on the It's A Wrap! sale and auction on eBay. [1] [2] [3]

These Illyrian crewmembers were working on the Illyrian starship which was boarded by Captain Archer and a team of MACOs. Some of them were hit by energy discharges and phase-pistols and some returned fire. One of the crewmembers hit Private Parsons. (ENT: "Damage")

The costume worn by Eric Norris was later sold off on the It's A Wrap! sale and auction on eBay. [4] 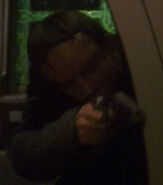 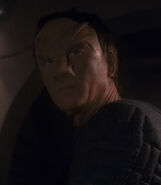 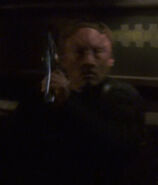 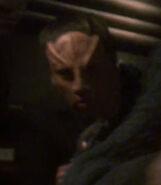 Played by an unknown actor
Community content is available under CC-BY-NC unless otherwise noted.
Advertisement