This male Kes contact was working on Security Relay Station One in 2370.

During the visit of the USS Enterprise-D to that planet that year, he acknowledged Lieutenant Worf's information that Captain Picard and Dr. Crusher were ready for transport. He lowered the defense shields of the station and contacted Worf soon after that he was ready to welcome the captain and the chief medical officer aboard. Worf was confused as he believed that he had already beamed the two aboard the station. (TNG: "Attached")

This individual, identified in the script as a "Kes com voice", was voiced by an unknown actor.

This Kes aide accompanied Ambassador Mauric on board the USS Enterprise-D in 2370. He scanned Mauric's guest quarters on the ship to ensure there were no devices to spy on Mauric. He would also scan anyone including the Enterprise-D crew who wished to enter into Mauric's quarters. (TNG: "Attached")

This Kes aide was played by actor J.C. Stevens.

These three Kes aides were working for Ambassador Mauric in 2370. They've operated the equipment Mauric brought aboard the Enterprise-D. (TNG: "Attached")

The costume of Lydia Triplett was sold off on the It's A Wrap! sale and auction on eBay. [1]
One of the male aides was played by actor Michael Blackburn. His costume was later sold off on the web.
[2] 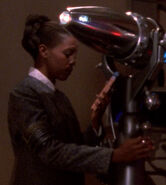 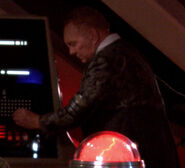 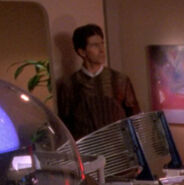 These Prytt guards were working for the Prytt Security Ministry in 2370, during security minister Lorin's kidnapping of the two Starfleet officers, Jean-Luc Picard and Beverly Crusher, in one of their prisons.

These two armed guards joined Lorin when she entered their cell to confront Picard and Crusher on conspiring with their enemy, the Kes. They both had their weapons drawn during the exchange.

Later, after Picard and Crusher escaped, these two armed guards joined two other troopers in chasing the fugitives through the Prytt territory before capturing Dr. Crusher. Once Crusher was captured, they contacted the Enterprise to transmit the coordinates to have the two Starfleet officers returned to the Enterprise. (TNG: "Attached")

This guard, who was working for the Kes, deliverer a food tray to the cell where Picard and Crusher were being held. With his weapon drawn, he sets the tray to the ground and carefully leaves. When the tray was revealed, Dr. Crusher found her medical tricorder under the lid, with an escape plan added to its files.

As was later explained to William T. Riker by Kes representative Mauric, he was one of the "certain... friends" that the Kes had among the Prytt, which Riker described as "spies". (TNG: "Attached")

This Prytt guard was played by background actor Rick Ryan.
His costume was later sold off on the It's A Wrap! sale and auction on eBay.
[8]

These troopers were on patrol searching for the escaped Picard and Crusher who were on the lamb in Prytt territory.

They were spied by the two escapees on a ridge, they were later joined by Lorin's two guards and gave chase to Picard and Crusher as they attempted to enter Kes territory. Once Crusher was captured, they released her back into the custody of the Enterprise-D. (TNG: "Attached") 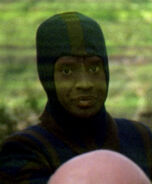 Played by Michael Blackman
Add an image to this gallery

This male individual was working as a secretary to prime minister Horath when Commander Riker from the Enterprise-D contacted him. The Prytt was confused to be contacted by someone outside their territory and asked if this communication was authorized. He terminated the transmission a short time later after stating that he won't participate in any unauthorized communication. (TNG: "Attached")

This individual, identified in the script as a "Prytt com voice", was voiced by an unknown actor.
Retrieved from "https://memory-alpha.fandom.com/wiki/Unnamed_Kesprytt?oldid=2408642"
Community content is available under CC-BY-NC unless otherwise noted.