The following is a list of unnamed Klingons who lived during the 25th century.

These two Klingons existed in an alternate timeline in 2404 and served as guards for Korath. They attempted to apprehend Admiral Janeway after she had stolen a chrono deflector so she could return USS Voyager to Earth in 2378. (VOY: "Endgame")

The uniform worn by Matt Williamson was previously worn by John Lendale Bennett in DS9: "The House of Quark" and by Patrick Barnitt in VOY: "Prophecy". [1] 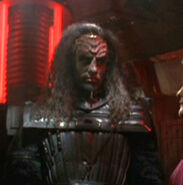 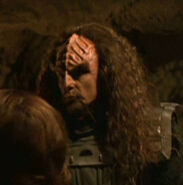 Played by an unknown actor
Add an image to this gallery
Retrieved from "https://memory-alpha.fandom.com/wiki/Unnamed_Klingons_(25th_century)?oldid=2398334"
Community content is available under CC-BY-NC unless otherwise noted.