The following is a list of unnamed Klingons from the alternate reality.

For information on the numerous Klingons from this timeline that appeared in deleted scenes taken from Star Trek, see: Rura Penthe inhabitants.

In 2259 of the alternate reality, this Klingon officer negotiated with Nyota Uhura during a Starfleet incursion of Qo'noS. Uhura explained they were looking for the fugitive John Harrison, but the Klingon simply responded by grabbing her by the throat and pulling out a knife, prompting James T. Kirk to go on the offensive. The Klingon was killed when Harrison showed himself, armed with a Boolean gun. (Star Trek Into Darkness)

This officer was played by Sean Blakemore.
Joseph Gatt auditioned for the part but was unsuccessful in obtaining it, only later to be cast as Science Officer 0718 from
Star Trek Into Darkness. [1]
The 2013 virtual collectible card battle game Star Trek: Rivals gives his name as Klingon Captain Kuron on card #68. The game Star Trek: Attack Wing calls him Kang.

These Klingon officers were patrol guards who stopped the K'normian trading ship with Kirk, Spock, Uhura, Hendorff, and a security officer in an area of the Ketha Province. In the following firefight with John Harrison, many of them were killed. (Star Trek Into Darkness)

Among the actors are Nick E. Tarabay and stuntman Curtis Lyons. The other Klingons were played by unknown actors and unknown stunt performers.
David Sobolov and Fred Tatasciore provided all the Klingon voices.
The 2013 virtual collectible card battle game
Star Trek: Rivals used several Klingons from Into Darkness as characters for the cards. It named them Klingon Warrior Durrah on card #30, Marg on card #31, Ch'tak on card #32, K'Dohr on card #33, Lorak on card #34, and Klingon Commander Raz on card #67. 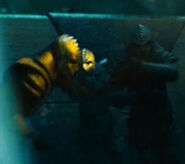 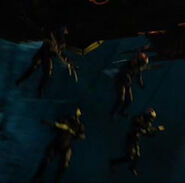 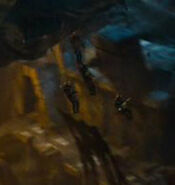 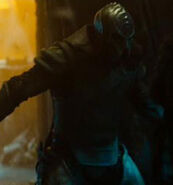 Add an image to this gallery
Retrieved from "https://memory-alpha.fandom.com/wiki/Unnamed_Klingons_(alternate_reality)?oldid=2404620"
Community content is available under CC-BY-NC unless otherwise noted.