This individual was abducted by the automated repair station, probably while his starship was in dock. While Captain Archer and T'Pol were searching for Travis Mayweather, whom the station had also kidnapped, they saw this Kreetassan among the abducted individuals. He was there for a long time, and the brain damage caused by the process could not be reversed. He was presumed killed, along with the others when the station was destroyed soon after. (ENT: "Dead Stop")

This Kreetassan was played by background actor Brad Lee, who received no credit for this appearance. He filmed his scene on Tuesday 20 August 2002 on Paramount Stage 9 and is lsited as "Krissarian" on the call sheet.

These two aides accompanied their captain aboard Enterprise NX-01 in 2151. They also left with their captain after he was insulted by Archer. (ENT: "Vox Sola")

The costume worn by Ortiz was later sold off on the It's A Wrap! sale and auction on eBay. [1]
They filmed their scenes on Wednesday 20 February 2002 and Thursday 21 February 2002 on Paramount Stage 8. 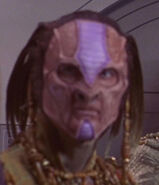 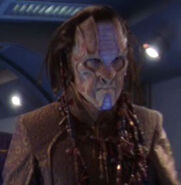 Played by Louis Ortiz
Add an image to this gallery

The captain visited the Enterprise. The visit did not go well, however, as the Kreetassan became insulted, and left the ship. When Hoshi Sato asked the captain why he was insulted, he replied, "you eat like you mate."

Later when a symbiotic alien boarded Enterprise, capturing a few of the crew members, including Archer, the Enterprise contacted the Kreetassans. The captain was aware of the lifeform and knew its home planet, but before he would help, he demanded an apology. Mayweather asked him to explain what they had done, and the captain explained that putting food in their mouth is like mating to them, and that it is offensive. He explained that the Kreetassans eat the same way, but do it in private. Mayweather apologized and the captain gave Enterprise the coordinates for the lifeform's planet. (ENT: "Vox Sola")

Head of state and aides Edit

The head of State and aides presided over a ritual of apology preformed by Jonathan Archer because Porthos had urinated on an alvera tree, which was considered by the Kreetassans to be a cultural treasure. (ENT: "A Night in Sickbay")

The Keetassans were played by unknown actors.

A merchant recommended the deuterium mining colony on an unnamed planet to Enterprise to refill their supply of deuterium. (ENT: "Marauders")

This Kreetassan was only mentioned in dialogue.

This visitor was in a bar on Pernaia Prime's moon. When T'Pol was looking for Menos, a Vulcan fugitive, he got between them, allowing Menos to attempt an escape. (ENT: "The Seventh")

He was played by an unknown actor.
Retrieved from "https://memory-alpha.fandom.com/wiki/Unnamed_Kreetassans?oldid=2408540"
Community content is available under CC-BY-NC unless otherwise noted.