The family of Cleveland Booker were individuals which he left behind on Kwejian, where until 3189, he could not return to as he was not welcomed. (DIS: "That Hope Is You, Part 1", "The Sanctuary")

The grandfather of Booker worked for the Emerald Chain. As he worked with the Chain, and decimated the trance worm population, the relationship between him and Booker became strained, leading to an estrangement. As he lay dying on his deathbed, he requested for Booker to be there with them, for which the answer he got from his grandson was his nonappearance. (DIS: "The Sanctuary") 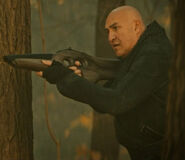 These scientists, described as being the best by Cleveland Booker, had been trying for years to get the sea locusts back to the sea. (DIS: "The Sanctuary")

These scientists were only mentioned in dialogue.
Community content is available under CC-BY-NC unless otherwise noted.
Advertisement