The ambassador was contacted by the crew of USS Voyager when they were seeking for help and information about the energy barrier on the surface of Ledos. He explained that the energy barrier was constructed centuries ago by aliens to protect the native Ventu from the Ledosian ancestors who could have destroyed the Ventu culture.

When Captain Kathryn Janeway agreed to reinstate the energy barrier following the Ledosian intrusion on the Ventu, the ambassador contacted her again and asked her to leave the Ledosian territory. (VOY: "Natural Law")

The Ledosian ambassador was played by actor Robert Curtis Brown.
He filmed his scenes on Friday 23 February 2001 on Paramount Stage 16 and is listed as "Ledosian Ambassador" on the call sheets.
His costume was later sold off on the It's A Wrap! sale and auction on eBay. [1]

The conference coordinator reported that Chakotay and Seven of Nine had failed to appear at the conference as planned. (VOY: "Natural Law")

While Tom Paris was doing some complex maneuvers at high velocities around several space stations in orbit of Ledos, this port authority officer hailed him and informed him he was in violation of their law. He informed Captain Janeway that Paris' punishment for breaking their traffic laws was to complete a three-day course in flight safety. (VOY: "Natural Law")

The port authority officer was played by actor Matt McKenzie.
His costume was later sold off on the It's A Wrap! sale and auction on eBay. [2]

These four scientists were part of a team led by Doctor Barus to civilize the Ventu and make the best of their land after the energy barrier between the two cultures was disabled by Voyager. They scanned the Ventu area upon arriving in their habitat.

All four and Doctor Barus were later transported from the planet by Tom Paris aboard the Delta Flyer II and then Paris destroyed the shuttle deflector dish that was keeping the barrier open. (VOY: "Natural Law")

The four background actors identified on the call sheet of Friday 16 February 2001 as Jim, Mike, Marina, and Shauna, filmed on this day their "Jungle" scenes on Paramount Stage 16.
The costume worn by Michael Moutsatsos was later sold off on the It's A Wrap! sale and auction on eBay. [3]

Played by Holiday Freeman
Add an image to this gallery

This Ventu girl was part of a tribe of natives on the planet Ledos. She was curious about Seven of Nine, who had crashed on the planet with Chakotay. Seven decided to set out on her own to find the class 2 shuttle deflector so she could call for help since Chakotay was hurt and could not go with her. The girl followed her and during that night, as Seven was chilled from the cold and rain, the girl offered her a blanket and food and built a fire. Seven accepted her help and she led Seven to the shuttle deflector.

After Seven activated the deflector, the girl got too close to it and received a severe shock. At the same time, Captain Kathryn Janeway was able to contact her, but Seven stayed behind and nursed the girl back to health. (VOY: "Natural Law")

The Ventu girl was played by actress Autumn Reeser.

This Ventu healer was one of the leaders of his tribe. When Chakotay and Seven of Nine crash landed on the planet, Chakotay was injured and developed an infection. He decided not to make contact with the natives, so as not to interfere with their culture. However the infection grew worse, and Chakotay's life was in danger. The healer sent members of his tribe and they took Chakotay back to a cave where the healer treated his wound, and cured the infection.

Later, he communicated with Chakotay by using gestures and a "map". The healer told Chakotay where on the surface they are. (VOY: "Natural Law")

The Ventu healer was played by actor Paul Sandman.
The call sheets are listing him as "Healer". 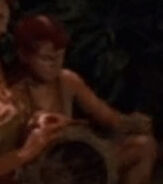 These two kids were part of the tribe of Ventu discovered by Chakotay and Seven of Nine following their crash-landing on the surface of Ledos in 2378. The kids were present when a Ventu woman was offered to Chakotay when he asked for Seven of Nine and when the Ledosian team led by Doctor Barus encountered the camp site. (VOY: "Natural Law")

The two child actors are listed as "Ventu kids" on the call sheets and filmed their scenes on Friday 16 February 2001 on Paramount Stage 16. They were tought on set by teacher Ruth Ann Crudup-Brown.

These actors were identified by the call sheets of the episode. The last three actors were played by Fulton, Robert Scott, and Chris Bugg. They filmed their scenes in mid-February 2001 on Paramount Stage 16. 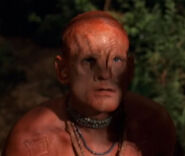 Played by Will Smith 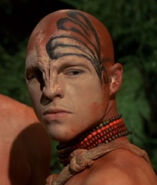 These five females were members of the Ventu tribe which made contact with Chakotay and Seven of Nine in 2378. The first one was presented to Chakotay when he asked the Ventu healer for his female companion, Seven of Nine. She was wearing a piece of the crash-landed shuttlecraft as jewelry and imitated Seven of Nine's Borg eyepiece. (VOY: "Natural Law")

The Ventu women were played by Dene Doucette, Deborah Thomas, Tracy Swerer, Valerie Johnson, and an actress with the last name Grecke. According to the call sheets, they filmed their scenes in mid-February 2001 on Paramount Stage 16. 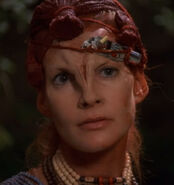 Add an image to this gallery
Retrieved from "https://memory-alpha.fandom.com/wiki/Unnamed_Ledosians?oldid=2391418"
Community content is available under CC-BY-NC unless otherwise noted.