This agent posed as an Akaali while on the Akaali homeworld in 2151. He hauled crates out of a curio shop by using a cart and was followed by Jonathan Archer and Riaan when he he left the crates on a clearing in a forest where a Malurian shuttle took the crates with a tractor beam. Archer chased the Malurian and fought with him, stunning him after the Malurian shot at him and Riaan. Archer pulled his prosthetic disguise off which revealed the Malurian's scaly-gray alien skin.

Later, he accompanied Garos and another Malurian agent into the city when searching for Archer and Riaan. He spotted the couple and opened fire but was hit by a shot of Archer's phase-pistol and became unconscious. His body was subsequently beamed back aboard a Malurian vessel. (ENT: "Civilization")

The Malurian was played by stunt actor Charlie Brewer.
The end credits of the episode are listing him as "Alien/Akaali #1" and the call sheets are listing him as "Stunt Akaali #1". He was identified as one of Garos' henchmen in the episode's script.
Brewer filmed his scenes between Tuesday 18 September 2001 and Friday 21 September 2001 on Paramount Stage 8 and 9 under Stunt Coordinator Vince Deadrick, Jr. 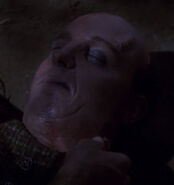 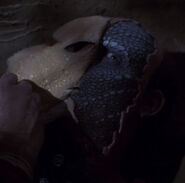 Attacking Archer and Riaan
Add an image to this gallery

This henchman was a comrade of Garos and was with him during a search for Archer and Riaan. Disguised as an Akaali, he was standing with Garos, amid a crowd of real Akaali, when Riaan pointed out to Archer that they were being followed by the pair of Malurians. Later, during the shootout, the Malurian pursuer closely followed Garos towards Archer and Riaan, then took up a firing position (next to Garos and behind some barrels). An exploding oil lamp in the street sent him and Garos crashing into the barrels and they fell to the ground. The pursuer then picked up his weapon, which had also fallen down, and returned it to a holster he had in his clothing. He was then beamed away with Garos and the other Malurian shooter. (ENT: "Civilization")

This Malurian was played by stunt actor Hugh Aodh O'Brien who received no credit for this appearance.
The episode's script identified him as one of Garos' henchmen while the call sheet is listing him as "Stunt Akaali #2".
O'Brien filmed his scenes on Wednesday 19 September 2001 and Thursday 20 September 2001 on Paramount Stage 8 under Stunt Coordinator Vince Deadrick, Jr.

The miner was involved in mining the Akaali homeworld. He was not in an Akaali disguise and walked atop a platform in a large cavern that was being drilled, while Riaan and Captain Archer observed from a window overlooking the area. (ENT: "Civilization")

The Malurian miner was created in CGI. "Several" unnamed Malurian miners were scripted to appear on individual platforms in the same area, though only one such figure was present in the final version of the episode.
Another unnamed Malurian was scripted to be operating a station in the mine control room when Archer and Riaan arrived there. He reached for his weapon as they entered but Archer stunned him with his phase-pistol. The alien thereafter continued to lie unconscious in the control room, at least until the captain and Riaan managed to escape.

This shuttle pilot was contacted by Garos' associate when he placed the crates on a clearing ready to be transported aboard the Malurian shuttle. The shuttle pilot responded "Putav nol". (ENT: "Civilization")

The Malurian shuttle pilot was voiced by an unknown actor.

The entire population of the Malurian system, some four billion people, along with Doctor Manway and a Federation science team, were exterminated by the malfunctioning Nomad probe in 2267.

The Malurians had initially sent a distress call, but by the time USS Enterprise arrived in the star system, they had all been wiped out. (TOS: "The Changeling")

These Malurians were only mentioned in dialogue.
Retrieved from "https://memory-alpha.fandom.com/wiki/Unnamed_Malurians?oldid=2511212"
Community content is available under CC-BY-NC unless otherwise noted.