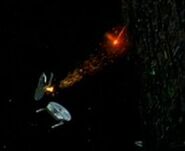 "You Are Cordially Invited" had essentially four different exterior scenes depicting these Miranda-class vessels. The first was recycled in "Strange Bedfellows", the second was along with the depiction of Sirella's transport, and the third was a one time appearance of said scene, and the fourth was later recycled with various ship substitutions in "The Reckoning" and "Tears of the Prophets".

Miranda-class starships witness Voyager's return
Add an image to this gallery
Retrieved from "https://memory-alpha.fandom.com/wiki/Unnamed_Miranda_class_starships?oldid=2345634"
Community content is available under CC-BY-NC unless otherwise noted.