The captain intercepted USS Voyager on its way to the planet Banea. He warned Voyager that it should not offer any assistance to the Banea who they were in conflict with. Voyager was on a mission to clear Tom Paris, who had been accused of murdering a Banean scientist.

When Tuvok began investigating the murder, the captain ordered his ship to attack Voyager, an attack that Voyager fended off. He did this in an attempt to kidnap Paris who had Tolen Ren's weapon equations implanted in him by the Banean doctor working with the Numiri. Later, he attacked and captured a shuttle that was returning Paris and Harry Kim to the Banean homeworld. Paris and Kim were beamed out to safety, and Kathryn Janeway informed the captain that the shuttle was loaded with explosive that she would set off, if he did not stand down, which he did. (VOY: "Ex Post Facto")

The Numiri Captain was played by actor Henry Brown who filmed his scenes on Wednesday 4 January 1995 on Paramount Stage 9.
Brown filmed two additional cuts of scene 81 pt. on Paramount Stage 16 on Friday 10 February 1995 during production of the episode "Heroes and Demons". On this call sheet he is listed as "Numri Captain". 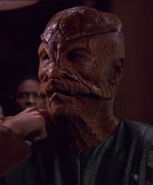 These two male laborers on Quarra were employed at one of the various power plants on the planet. (VOY: "Workforce", "Workforce, Part II")

Both Numiri were played by background performers who received no credit for their appearances. On the call sheets they are listed as "Numari".

These two officers and their captain were the away team that boarded a shuttle carrying Tom Paris in an attempt to capture him, since his brain engrams were carrying Banean weapons information. (VOY: "Ex Post Facto")

These two Numiri were played by unknown actors who are listed as "Armed Numiri Guards" on the call sheet. They filmed their scene on Wednesday 4 January 1995 on Paramount Stage 9.
Deutsch
Community content is available under CC-BY-NC unless otherwise noted.
Advertisement