In 2371, this starship assisted the USS Farragut and a Miranda-class starship in recovering the crew of USS Enterprise-D from Veridian III, following the forced crash landing of its saucer section. (Star Trek Generations)

The TNG eBook, Slings and Arrows: "The Insolence of Office", gives this ship's name as the USS Trosper (β). 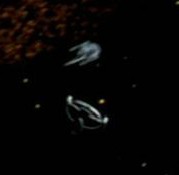 ...and a third heavily damaged

At least three of these starships fought against the Borg at the Battle of Sector 001 in 2373.

One destroyed vessel was in the vicinity of the USS Defiant while this ship passed a destroyed hulk as it made a strafing run against the cube. Another two vessels were on the far side of the attacking Borg cube when the cube was first engaged by the USS Enterprise-E. (Star Trek: First Contact)

This marked the final appearance of the Oberth-class in the Star Trek series and the only time a ship of this class was seen firing weapons.
Retrieved from "https://memory-alpha.fandom.com/wiki/Unnamed_Oberth_class_starships?oldid=2347552"
Community content is available under CC-BY-NC unless otherwise noted.