These males began visiting Deep Space 9 in 2370 and continued through 2374, until prior to the Dominion War.

Early in 2370, three individuals were in line behind Julian Bashir and Melora Pazlar at the new Klingon restaurant. They sat at a nearby table behind Melora passing around a curious gadget that were taking turns inspecting. Two days later the trio passed outside the security office as Quark entered there to discuss his problem with Fallit Kot to Odo. (DS9: "Melora")

Two individuals were meandering outside the Replimat as Jadzia Dax and Pel discussed Quark. Later, they visited Quark's when Rom was complaining to Odo about his brother's relationship with Pel. They sat up at the bar enjoying drinks and snacking on the Gramilian sand peas set out for the guests. (DS9: "Rules of Acquisition")

Later that year, one of the Pakleds visited Quark's, where he shared a drink with a female Bajoran officer. He later visited the casino at Club Martus during its grand opening, as Quark and Odo watched. He was later joined by a Bolian woman. He was later seen leaving Club Martus as Quark arranged the racquetball match between Miles O'Brien and Julian Bashir across the way, eventually standing in the back of the crowd as they cheered. Afterwards he stood talking with the Bolian woman once again outside of Quark's. At 1200 hours the next day, the sane two stood in Quark's and watched the aforementioned match between O'Brien and Bashir on a viewscreen Quark had set up over his bar. (DS9: "Rivals")

Another was on the Promenade when a replicant of Miles O'Brien was aboard the station. (DS9: "Whispers")

When Major Kira was paying Kubus Oak a visit in DS9's brig later that year, a Pakled was sitting in another of the brig's cells. (DS9: "The Collaborator")

In 2371, this individual visited DS9 shortly before the Romulan delegation arrived and the Klingon Intelligence officers started a brawl in Quark's. (DS9: "Visionary")

Later the same year, this individual was on the promenade speaking with a Kressari man. (DS9: "Life Support")

In 2372, this individual visited DS9 shortly before the Klingon attack. At the time, he visited the Promenade during the Klingon shore leave and participated later in a game of dabo at Quark's. (DS9: "The Way of the Warrior")

Later that year, two Pakleds visited Deep Space 9 while the employees of Quark's were on strike. Alongside a Bolian woman, they were almost the only guests in the establishment. (DS9: "Bar Association")

In 2373, this individual passed near the Replimat as he walked across the Promenade. (DS9: "Let He Who Is Without Sin...")

These Pakleds were played by unknown actors. One or more of the appearances may have been portrayed by Dan Lake. 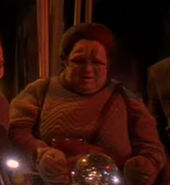 Played by an unknown actor
(DS9: "The Way of the Warrior")

This male served as the captain of a Pakled Clumpship. In 2380, his Clumpship, along with two others, ambushed the USS Cerritos. Upon his arrival, he briefly contacted the Cerritos and announced "[w]e have you now, Enterprise," only to be attacked following the arrival of the USS Titan, which prompted him to observe, "Oh no! It's another Enterprise." After the Titan caused considerable damage to his ship he ordered his crew to "Make us go. Go, guys, go!" (LD: "No Small Parts")

This captain was voiced by an unknown performer.

These crew members served on a Clumpship. In 2380, they participated in an attack on the Cerritos until their ship was fired upon by the Titan, which prompted their captain to order a retreat. (LD: "No Small Parts")

In 2381, this female served as the Queen of Pakled Planet. However, despite her apparently royal title and status, she was unable to negotiate cease-fires, as she did not "have a big enough helmet to do that." (LD: "The Spy Humongous")

This queen was voiced by Gillian Vigman.
Nederlands
Community content is available under CC-BY-NC unless otherwise noted.
Advertisement