This male visited Quark's aboard Deep Space 9 in 2369, shortly after the bar reopened due to an agreement between Quark and Commander Sisko. He was seen talking to the alien dabo girl. (DS9: "Emissary")

He was also at Quark's when the Duras sisters, Lursa and B'Etor, met with the Bajoran terrorist Tahna Los. (DS9: "Past Prologue")

He later visited the Promenade at the time Ibudan was murdered, and was present when Constable Odo was hunted down the Promenade by an angry mob. (DS9: "A Man Alone")

He visited Quark's when Q appeared and challenged Commander Sisko for a boxing match. During this fight he watched the two and cheered them on. (DS9: "Q-Less")

He visited the Promenade when Julian Bashir and Miles O'Brien returned from their trip to the Bajoran village. (DS9: "The Storyteller")

Carrying a bag, he passed the security office on the promenade when Lwaxana Troi visited Constable Odo during his work. (DS9: "The Forsaken")

This individual was portrayed by Entertainment Weekly reporter Benjamin Svetkey in the pilot episode "Emissary" and by an unknown actor in the other episodes. 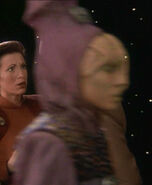 This female visited Club Martus aboard Deep Space 9 in 2370, where she was greeted by Martus Mazur. She was later outside of Quark's as Quark complained to Commander Benjamin Sisko about his new competition. (DS9: "Rivals")

She visited Quark's in 2371 and went around the dabo table when Quark announced Major Kira as his one millionth customer. She passed Major Kira and Odo on the second level of the Promenade at the time Quark tried to get a holo-image of Kira. (DS9: "Meridian")

This female Pelian was played by an unknown actress.

This couple, a man and a woman, visited Deep Space 9 in 2370, where they worked on behalf of the Cardassians to secure the abduction of William Patrick Samuels, the Maquis responsible for bombing the Bok'Nor.

Together they observed William Patrick Samuels and Sakonna from an upper level of the promenade, as Sakonna relayed to Samuels where his quarters had been arranged at. Later, the female alien stood intentionally waited in a corridor where she knew Samuels would pass. As he approached, she dropped her bag, and Samuels offered to help her, but was hyposprayed by the male alien who was casually walking behind Samuels. Together they dragged Samuels into an adjacent quarters, whereafter he was apprehended and taken into custody by the Cardassians. (DS9: "The Maquis, Part I")

The female was played by regular background actress Grace Harrell, and the male by regular background actor Joe Mack, both of whom received no credit for their appearance.
According to the script, these two were identified as "two aliens from the same species, one male and one sexy female." It further notes of the female, that as he observes her in the corridor, "Samuels takes her in with quiet appreciation."

This female and a male companion watched the first kiss of Odo and Kira Nerys on the promenade. (DS9: "His Way")

This alien was played by regular background actress Ivy Borg, who received no credit for this role.
The call sheet for "Image in the Sand" listed her as "Asparagus Head".

This individual from Peliar Zel was shopping on the promenade when the crew of Deep Space 9 prepared for a baseball match against the Logicians. (DS9: "Take Me Out to the Holosuite")

He passed Chief Miles O'Brien and Ensign Nog at the replimat. (DS9: "Treachery, Faith and the Great River")

The aunt of Lathal Bine was a native of Beta moon who represented the Betans during a dispute with the neighboring Alpha moon in 2337, which nearly resulted in war. She was later described as "the iron willed lady of Beta Moon". Odan, a Federation ambassador mediating the dispute, convinced both her and Kalin Trose, her Alphan counterpart, to switch places for a week to better understand each other's position.

Her nephew, Lathal, would represent Beta Moon in negotiations when a second crisis erupted three decades later in 2367, again with Trose representing Alpha Moon and with Odan again mediating. (TNG: "The Host")

This individual from Alpha Moon ploted to assassinate the delegate from Beta Moon in 2337. The leader of the Alpha Moon delegation, Kalin Trose, quelled the plot. (TNG: "The Host") 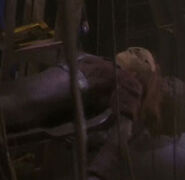 These two captives were among the abducted aliens of the 22nd century who were held aboard the automated repair station. In 2152, Captain Jonathan Archer and Sub-Commander T'Pol found these aliens when they've searched for Ensign Travis Mayweather. The away team was unable to rescue the two Pelians as they were too long connected to the station. (ENT: "Dead Stop")

The two background actresses filmed their scenes on Tuesday 20 August 2002 on Paramount Stage 9 and were identified as "Asparagus Heads" on the call sheet.

This female visited San Francisco, on Earth, in 2372 of an alternate timeline, when Harry Kim found himself near his apartment. She passed him a few times on the streets. (VOY: "Non Sequitur")

This Pelian was played by regular background actress and stand-in Sue Henley.
She filmed her scenes for this episode on Tuesday 25 July 1995 and Wednesday 26 July 1995 on location at the New York Street lot and is listed as "Masked Alien" and "Alien Pedestrian" on the call sheets.

This male was a Borg drone and a member of the underground movement Unimatrix Zero in 2376/77. He took part in several meetings regarding the safety of their place and left the place shortly before its destruction. (VOY: "Unimatrix Zero, Part II")

This female passenger, with hair, spoke to a Bolian woman in Ten Forward aboard the USS Enterprise in 2371. (Star Trek Generations)

This alien was played by regular extra Grace Harrell.
Retrieved from "https://memory-alpha.fandom.com/wiki/Unnamed_Pelians?oldid=2665688"
Community content is available under CC-BY-NC unless otherwise noted.