With a few exceptions, all members of this species refer to themselves as "Q".

Amanda Rogers' parents had taken Human form and then conceived a child. They were executed when Amanda was still a baby for being unable to resist using the power of the Q by the Q Continuum while living on Earth in Topeka, Kansas. After their death, Amanda was adopted by a couple who served in Starfleet as marine biologists. (TNG: "True Q")

Amanda Rogers' mother and father were played by Kim Max Pemberton and an unknown actor, respectively.

These Q, seen in the forms of three male and two female Humans, a dog, and a scarecrow, appeared in Q and Quinn's manifestation of the Q Continuum, as presented to fall within the comprehension of Captain Kathryn Janeway and Tuvok.

Encountered were an old man in a rocking chair, smoking a corncob pipe, while reading a book titled The Old, a young woman reading a magazine called The New, a young couple playing croquet with balls that resembled planets, and another older man playing a pinball game called "Q Continuum Galaxy".

In addition, the dog, a bloodhound, simply laid on the ground, while the scarecrow, clad in a Starfleet uniform with a type 2 phaser on its waist, watched over an empty field. (VOY: "Death Wish")

These Q were described in the script as "country folk".
The Human actors filmed their scenes on Tuesday 17 October 1995 at Club Ed's in Lancaster, and are listed with the descriptors from the call sheet for that day seen below.

Bloodhound
Played by an unknown dog

These soldiers were played by unknown performers.

This horse was seen at Colonel Q's Civil War encampment being led by a soldier of the status quo. (VOY: "The Q and the Grey")

This horse was played by an unknown animal actor. 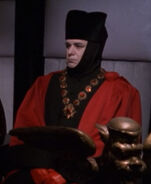 These two judges flanked the central judge Q when presiding over the trial of Q's son in 2378 aboard the Voyager. (VOY: "Q2")

The "Q-Judges" to the right and left were played by background actors Mark Pash and David Campagna. (Star Trek Encyclopedia (4th ed., vol. 2, p. 190))
According to the episode's script, they were noted as being "attired in the same "robes" that Q wore in the TNG episodes "Encounter at Farpoint" and "All Good Things..."."

This shadow asked Q for a report on his progress with Amanda Rogers. Q informed him that, "As anticipated, there have been some problems… but the Humans are cooperating. I need more time. There is a possibility we won't have to terminate her." (TNG: "True Q")

This Q, who was identified in the script as a "Q Shadow", was voiced by an unknown actor.
According to the script notes, his appearance was described as "Suddenly a DARK SHADOW appears on the wall ahead of him. Q stops, annoyed. We HEAR the voice of the shadow… it is futzed and sepulchral."

These soldiers were played by unknown performers.
Community content is available under CC-BY-NC unless otherwise noted.
Advertisement