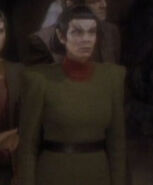 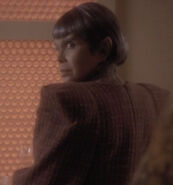 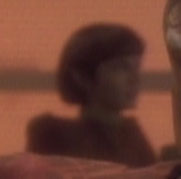 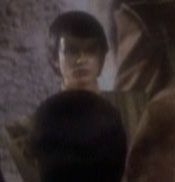 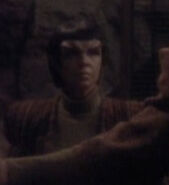 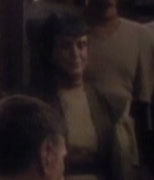 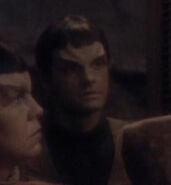 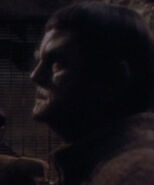 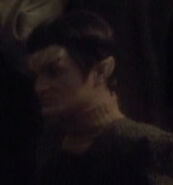 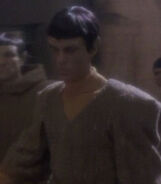 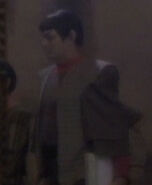 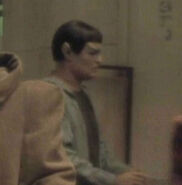 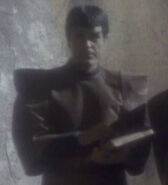 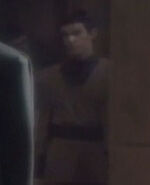 This civilian was played by actor Daniel Roebuck.
According to the novelization of Unification, his name was Jaron (β). In the scripts and on the call sheets his character was referenced as "Romulan #1". The name "Jaron" was later used for a regional news story about the actor and his work with Nimoy. [17]
The Star Trek Customizable Card Game gives him the name Dr. Koramar. Another CCG card uses the name Jaron for a different Romulan from the episode "Future Imperfect". [18]

The seven officials were played by background performers who received no credit for their appearance.
Several costumes were sold off on the It's A Wrap! sale and auction on eBay including the costumes of Lee Nickerson, [19] Bill Hacket, [20] Bonnie Perkinson, [21] and Ray Petersen. [22] Additional costume parts worn by Ray Petersen and Michael Phipps at the banquet scene were also sold off. [23] [24]
The Star Trek Customizable Card Game gives the name of Michael Phipps' character as Setek. [25]

This dignitary was played by background actress Ana Gionatis who received no credit for her appearance.
Her costume from "What You Leave Behind" was later sold off on the It's A Wrap! sale and auction on eBay. [26] [27]
The novelization of the episode gives her name as Lar (β) and also the rank of High Centurion (β). 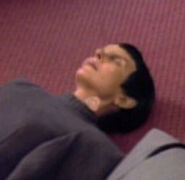 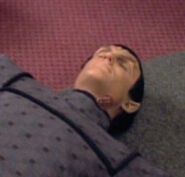 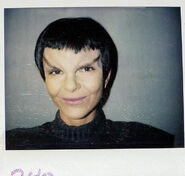 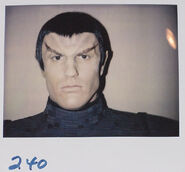 Nero's wife, who was on Romulus at the time of its destruction, was pregnant with Nero's unborn child at the time. (Star Trek)

Nero's wife was on Romulus when the planet was destroyed. Her death drove Nero into his genocidal quest for vengeance. (Star Trek)

This senator was portrayed by background actor Kenneth Blanck who received no credit for his appearance.
His costume was sold off on the It's A Wrap! sale and auction on eBay. [28]

The soup woman was a suspicious older female, who worked as a food server at a small cafe in the Krocton Segment on Romulus. She recommended the soup to Jean-Luc Picard and Data, who were disguised as Romulans. She disbelieved that they were from Rateg, as they claimed, because they did not speak with their "particular inflection". She theorized that they were from the Romulan security forces, sent there to watch the intercessor's office, suspecting that the intercessor was in trouble. (TNG: "Unification I")

The soup woman was played by actress Mimi Cozzens.
The costume worn by Cozzens was sold off at the It's A Wrap! sale and auction on eBay. [29]