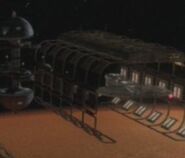 A Saber-class in final stages of construction

In 2371, at least two of these starships were being constructed at the Utopia Planitia Fleet Yards in orbit of Mars. (VOY: "Relativity")

This appearance is the earliest chronologically dated, in-universe appearance in the series, showing that the class was in service at least two years prior to its 2373 appearance in Star Trek: First Contact.

In mid-2373, several of these starships fought against the Borg in the Battle of Sector 001. (Star Trek: First Contact)

In mid-2374, this starship participated in Operation Return, and was among the first ships to break through the Dominion lines. (DS9: "Sacrifice of Angels")

This ship with two others on patrol

...and then there were two.

This starship, along with an Akira-class starship and a Steamrunner-class starship, were on patrol near Deep Space 9 in mid-2374 through early-2375. (DS9: "Statistical Probabilities", "The Magnificent Ferengi", "Afterimage")

The trio later became a duo, with the departure of their Akira-class partner, mid-year. (DS9: "Field of Fire")

In 2375, numerous of these starships departed Deep Space 9 for the Invasion of Cardassia. (DS9: "What You Leave Behind")

Battle against the Borg Sphere

This starship was among the starships to intercept the Borg transwarp opening and engage Sphere 634. After the sphere's destruction by the USS Voyager, this Saber-class ship also formed a part of the convoy that escorted the long lost ship home. (VOY: "Endgame")

Retrieved from "https://memory-alpha.fandom.com/wiki/Unnamed_Saber_class_starships?oldid=2704691"
Community content is available under CC-BY-NC unless otherwise noted.