These cloaked observers were members of the duck blind mission who were tasked with (unsuccessfully) apprehending (the rogue) Lieutenant Commander Data. (Star Trek: Insurrection) 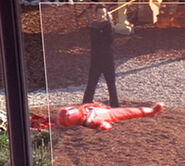 This doctor was working on Ru'afo's flagship in 2375. He oversaw a "flesh stretch session" on Ru'afo and informed him that his body was producing too much toxic components because of the continous treatments. (Star Trek: Insurrection)

The Son'a doctor was played by Raye Birk.
The Star Trek Customizable Card Game gives his name as Rae'alin.

This officer was in charge of command on Ru'afo's flagship while Ru'afo was not on the bridge. He informed Ru'afo about the closing shuttle, helmed by Data. Along with Ru'afo and the rest of the bridge crew, he was beamed over to the Holoship moments before the Son'a collector was activated. They initially did not realize the deception, as the bridge had been recreated there. After discovering the ruse, the officer assisted Ru'afo in accessing the ship's transporters to beam Ru'afo over to the collector. (Star Trek: Insurrection)

This Son'a officer was played by Bruce French.
The costume worn by French was sold off on the It's A Wrap! sale and auction on eBay. [1]
The Star Trek Customizable Card Game gives his name as Sam'po.

This officer served aboard Ru'afo's flagship in 2375. (Star Trek: Insurrection)

She was played by Claudette Nevins.
The Star Trek Customizable Card Game gives her name as Pa'rena.

This officer was one of the Son'a who served aboard Ru'afo's flagship in 2375.

He was present when the USS Enterprise-E under the command of Commander William T. Riker set a collision course to Ru'afo's ship. When Worf suggested to him that Riker was not bluffing, the Son'a officer ordered evasive maneuvers, exposing the ship's broadside, and permitting the Enterprise to score direct hits that disabled the Son'a ship's life support system. (Star Trek: Insurrection)

The following images are of characters who appeared in a deleted scene. 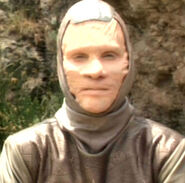