List of unnamed Starfleet Academy personnel from the 24th century.

This officer was an academy advisor at Starfleet Academy. They signed their name to Jean-Luc Picard's Degree of Command and Control in 2327. (PIC: "Remembrance")

This officer was only mentioned in writing.
The name was illegible on the degree.

The Academy Range Officer was in charge of the Academy Flight Range, located near Saturn.

In 2368, the team navigator of the Nova Squadron, Jean Hajar, filed a flight plan with the Academy Range Officer before Nova Squadron began exercises in the Flight Range. (TNG: "The First Duty")

This officer was only mentioned in dialogue.

This lieutenant commander was an instructor for Ro Laren's Advanced Tactical Training program. According to Ro, he was "a man I admired and respected, he was sympathetic to [the Maquis]. He resigned and left to join them." (TNG: "Preemptive Strike")

This instructor was only mentioned in dialogue.
This instructor was intended by the producers to be a reference to Commander Chakotay following the creation of Star Trek: Voyager. (Star Trek: The Next Generation Companion (2nd ed., p. 298)) Ro's article at StarTrek.com states this much in her biography. [1] However, this idea was ultimately contradicted in the Voyager episode "In the Flesh", which established that Chakotay resigned on 3 March 2368, roughly the time "Ensign Ro" would have taken place.

Julian Bashir's professor from medical school used to say that the brain had a spark of life that couldn't be replicated.

In 2371, Bashir quoted the professor when Kai Winn suggested replacing portions of Bareil Antos's brain with artificial implants, saying that Antos could lose that spark if they did. (DS9: "Life Support")

This professor was only mentioned in dialogue.

These cadets attended Starfleet Academy in 2368 during the inquest into the death of Nova Squadron cadet Joshua Albert, presided by Superintendent Brand. Some of them attended the hearings and some passed Captain Picard, Wesley Crusher, and Boothby in the Academy gardens. (TNG: "The First Duty")

All cadets were played by background performers who received no credit for their appearance. Beside the named ones pictured below the others were played by actors J. Stanfill, Belscher, K. Holland, and Cohen and actresses Mitchell, Raber, and Dixon. Several uniforms were later sold off on the It's A Wrap! sale and auction on eBay including Brian Bennett's [2] and six unknown performers. [3] [4] [5] [6] [7] [8]
They filmed their scenes on Monday 27 January 1992 on location at the Japanese Garden at the Tillman Water Reclamation Plant and on Friday 31 January 1992 and Monday 3 February 1992 on Paramount Stage 16.
A scene extended with a matte painting from "The First Duty" was later re-used for the fifth season episode "Time's Arrow", also featuring several of the cadets. 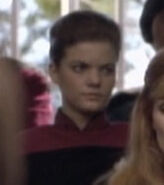 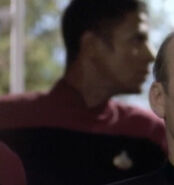 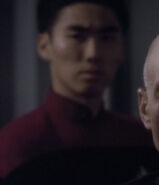 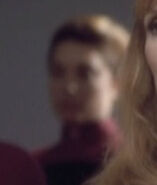 According to Tal Celes, her instructors gave her the benefit of the doubt, letting her inabilities slide because they were eager to have Bajorans in Starfleet. (VOY: "Good Shepherd")

These instructors were only mentioned in dialogue.

The Commandant of Starfleet Academy was a male Bolian rear admiral who served during the late 24th century.

In 2372, the Commandant was approached by Admiral Leyton regarding the use of Red Squad to assist the Starfleet takeover of Earth. The Commandant initially thought it was a mistake to use them, but later admitted that they performed their mission admirably following its success. Captain Benjamin Sisko contacted the Commandant regarding a transporter log that was found following the operation. The Commandant thanked Sisko for pointing out the oversight from the cover-up, cautioning that he did not want anyone from Red Squad to get in trouble for their actions. (DS9: "Paradise Lost")

The Academy Commandant was played by Rudolph Willrich.

This training instructor taught Frank Darwin at the Academy, and recommended the crewman as an officers candidate, but Darwin turned down the training to serve on USS Voyager. (VOY: "Meld")

This instructor was only mentioned in dialogue.

These two officers were the former classmates of the murdered Hector Ilario. Ilario kept a picture of them in his quarters. Counselor Ezri Dax later discovered that this picture with laughing faces on it was the reason for the murder of Ilario. (DS9: "Field of Fire")

The officer in the sciences division uniform was played by background actor John Ames and the other one by an unknown actor. Both received no credit for this appearance. The boots worn by Ames are a pair of black leather Giorgio Brutini and were sold off on the PropStore.
They also presumably belonged to the Class of '72.

Robin Lefler had friends at the Academy, from whom she learned about Wesley Crusher's intelligence. She explained this to him in 2368 when he remarked on how it seemed as though she knew him already, despite never having met before. After asking about his pranking Adam Martoni, which they'd also told her about, she then wondered if it was true what they said about Wesley's birthmark. (TNG: "The Game")

These friends were only mentioned in dialogue.

These two individuals were friends of Melora Pazlar at Starfleet Academy. Despite being assigned to different ships, they became engaged. Melora estimated that they wouldn't see each other for a year or more, and likely only for a few weeks at a time. (DS9: "Melora")

These people were only mentioned in dialogue.

This Pelian was a command division cadet at Starfleet Academy in 2368. She was present during the hearings overseen by Rear Admiral Brand concerning the death of Nova Squadron member Joshua Albert and was also seen talking to a fellow cadet on the Academy grounds. (TNG: "The First Duty")

This Pelian cadet was played by Cigi Britton and Louise Bale. While Bale portrayed this Pelian during the exterior scenes, Britton can be seen as this cadet during the hearing scenes at the Starfleet Academy. Britton filmed her scenes on Friday 31 January 1992 and Monday 3 February 1992 on Paramount Stage 16 and is listed as "female alien cadet" on the call sheets. Bale filmed her scenes on location at the Japanese Garden on Monday 27 January 1992 and is listed as "Alien Cadet" on the call sheet.
Both uniforms were sold off on the It's A Wrap! sale and auction on eBay. Bale was misspelled as "Layise Bale" on the name tag and Britton as "Cigi Brihen". [9] [10] [11] 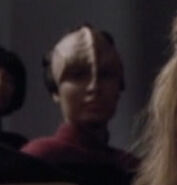 A male Betazoid who was a full telepath held the office of superintendent during Picard's time at the Academy. According to Picard, he didn't have to ask cadets what they'd done when meeting them at his office. Riker took Picard's 2368 recollection of this to mean that he himself had been called into the superintendent's office, a story he wished to hear more of. (TNG: "The First Duty")

This woman was one of Jean-Luc Picard's teachers at the Academy, who had been confined to a wheelchair since birth.

In 2367, Picard mentioned her as part of his last ditch effort to convince Deanna Troi not to resign due to the loss of her empathic abilities.(TNG: "The Loss")

This cadet was sitting under a tree but at the flowers in the garden of the Starfleet Academy in 2368. Boothby was angry about his careless behavior and shouted him away. (TNG: "The First Duty")

This cadet was played by background actor Richard Rothenberg who received no credit for his appearance. He filmed his scene on location at the Japanese Garden on Monday 27 January 1992.

Riker's superintendent was a Vulcan male who memorized all of the cadets' personnel files and subsequently knew everything about them.

This superintendent was only mentioned in dialogue.

Cristóbal Rios' mother used to sing "Arroz con leche" to him when he was young. He remembered her as not liking people playing with her things. She was deceased by 2399. (PIC: "Broken Pieces") She served in Starfleet, and would occasionally bring her son to work with her at Starfleet Academy. (PIC: "Assimilation")

This mother was only mentioned in dialogue.

These friends were with then-Cadet Benjamin Sisko at The Launching Pad when Solok and some of his fellow Vulcan cadets came in and told Sisko they were "doing research on illogical Human bonding rituals", something which irked the Humans. (DS9: "Take Me Out to the Holosuite")

These Humans were only mentioned in dialogue.

Following Sito Jaxa's Nova Squadron incident in 2368, she lost all of her friends and acquaintances, causing her to have to take her flight test with her instructor because "no one else would be my partner." (TNG: "Lower Decks")

These freshmen were overheard by Cadet Nog in 2372, complaining about their poor treatment at the hands of upperclassmen. (DS9: "Homefront")

These freshmen were only mentioned in dialogue.

Norah Satie wanted a background check done on all of Simon Tarses' friends in the Academy training program after he was revealed to be one-quarter Romulan, rather than Vulcan. (TNG: "The Drumhead")

These friends were only mentioned in dialogue.

These four Starfleet Academy teachers were present during the hearings of the Nova Squadron in 2368, presided by Superintendent Brand. (TNG: "The First Duty")

Beside Hal Donahue and Star Halm, the two female teachers were played by either L. Jeffreys, V. Valles, and M. Dysart. Halm is listed as a parent on the call sheet.
They filmed their scenes on Monday 27 January 1992 on location at the Japanese Garden and on Friday 31 January 1992 and Monday 3 February 1992 on Paramount Stage 16. 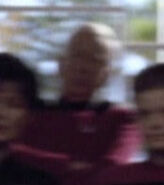 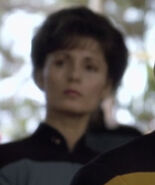 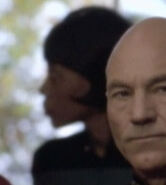 This coach trained the decathlon team while B'Elanna Torres was a cadet. They were furious at Torres for quitting the Academy. (VOY: "Basics, Part I")

This coach was only mentioned in dialogue.

Prior to 2371, Tuvok had taught thousands of cadets, yet he had never had the kind of difficulties he later faced when he attemped to instruct the ex-Maquis members who joined the crew of USS Voyager. (VOY: "Learning Curve")

These cadets were only mentioned in dialogue.

These four upperclassmen runners were passed on the last hill of the Starfleet Academy marathon course on Danula II by then-freshman Jean-Luc Picard. (TNG: "The Best of Both Worlds, Part II")

These upperclassmen were only mentioned in dialogue.

In the 2350s, Cadet Solok and some fellow Vulcan cadets entered The Launching Pad, explaining to a young Benjamin Sisko that they were "doing research on illogical Human bonding rituals." (DS9: "Take Me Out to the Holosuite")

These Vulcans were only mentioned in dialogue.

This Vulcan was a command division cadet at Starfleet Academy in 2368. He was present during the hearings overseen by Admiral Brand concerning the death of Nova Squadron member Joshua Albert. (TNG: "The First Duty")

This Vulcan was played by background actor A. Valdez who received no credit for this appearance.
Valdez filmed his scenes on Monday 27 January 1992 on location at the Japanese Garden and on Friday 31 January 1992 and Monday 3 February 1992 on Paramount Stage 16.
Community content is available under CC-BY-NC unless otherwise noted.
Advertisement