The following is a list of unnamed 22nd century Starfleet personnel:

A former commanding officer of Jonathan Archer once believed as Malcolm Reed did, that fraternization between a captain and members of his crew had no place on a starship. Archer mentioned this in 2152 after Reed explained his earlier discomfort at casually interacting with Archer over a meal. Archer, for his part, didn't agree as far as Enterprise NX-01 was concerned, feeling that the crew had to depend on each other given the lengthy duration of their mission. (ENT: "Minefield")

These two operations division officers shared a drink at the 602 Club in 2143 when Jonathan Archer and A.G. Robinson started a fight and broke their table. Later, the two held Robinson while Tucker held Archer to end their fight. (ENT: "First Flight")

Both stunt performers received no credit for their appearance. They filmed their scene on Friday 14 March 2003 on Paramount Stage 9 and are listed as "Stunt Officer 1" and "Stunt Officer 2" on the call sheet.

Erika Hernandez gave Jonathan Archer a list of senior officer candidates for the Columbia, later asking if he'd had a chance to look it over and make recommendations. She asked him who he would recommend for tactical officer, to which Archer replied she might want to choose someone "someone with more field experience, a MACO." Hernanadez was hesitant to have a military officer on her bridge. (ENT: "Home")

This candidates was only mentioned in dialogue.
It is unknown how many, if any, of these candidates ultimately crewed the
Columbia. (See Columbia personnel.)

These two workmen wore environmental suits while working on the repairs of Enterprise at the drydock orbiting Earth in 2153. (ENT: "The Expanse")

These workmen were CGI-created.

Three male operations division officers and one female sciences division officer were among the Humans present during the bombing at the United Earth Embassy on Vulcan in 2154. In all, thirty-one Humans died in the blast, including Vice Admiral Maxwell Forrest.

The female officer checked though the foyer security port, operated by Corporal Askwith. Moments later, a bomb exploded in the embassy.

All three Starfleet officers were played by background performers who received no credit for their appearances.
It is unclear if the first two officers survived the bombing or if they're among the thirty-one Humans who died. 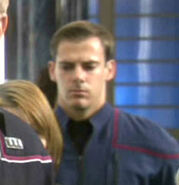 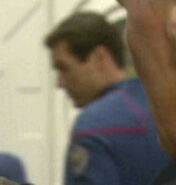 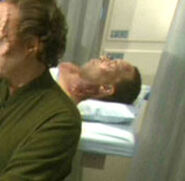 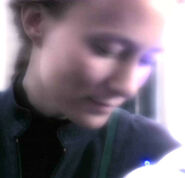 These officers and crewmen attended the Federation Founding Ceremony in 2161. (ENT: "These Are the Voyages...")

These officers were composed of several Enterprise series contributors and extras.
Coto's uniform was sold off on the It's A Wrap! sale and auction on eBay.
[1] 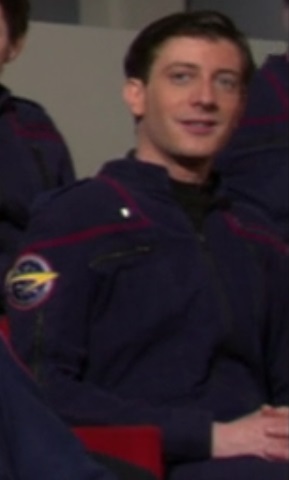 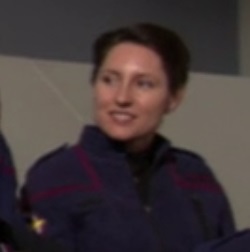 Crewman
Played by Melissa O'Keeffe
Add an image to this gallery

These two female flag officers, an admiral and a vice admiral, were guests at the launch ceremony of Enterprise NX-01 in 2151 and listened to the recorded speech of Zefram Cochrane. (ENT: "Broken Bow")

Both admirals were played by background performers who received no credit for their appearances and who were identified by the call sheet for the episode.
Shazadi's uniform was sold off on the It's A Wrap! sale and auction on eBay.
[2]

This female commodore attended the founding ceremony for the Coalition of Planets in 2155. (ENT: "Demons", "Terra Prime")

She was played by background actress Nancy Avila, who received no credit for her appearances.
Her uniform was sold off on the It's A Wrap! sale and auction on eBay.
[3]

This rear admiral was a guest at the launch ceremony of Enterprise in 2151 and listened to the recorded speech of Zefram Cochrane. (ENT: "Broken Bow") He also welcomed the senior staff of Enterprise back home at the Bay Stadium on Earth. (ENT: "Home")

He later attended the founding ceremony of the Coalition of Planets in 2155. (ENT: "Demons", "Terra Prime")

He was played by background actor Woody Porter, who received no credit for his appearances.
His uniform was sold off on the It's A Wrap! sale and auction on eBay.
[4]

This flag officer served as a vice admiral in Starfleet. He attended the founding ceremony of the Coalition of Planets in 2155. (ENT: "Demons", "Terra Prime")

He was played by set security Steve D'Errico, who received no credit for this cameo appearance.

This ensign served in the NX Program as a flight control officer in 2143.

He monitored the progress of NX-Alpha from NX-Control during Commander A.G. Robinson's attempt to break the Warp 2 barrier. He later reported to Commodore Maxwell Forrest that New Berlin had detected NX-Beta leaving Earth's orbit, despite the report that the internal sensors indicated that the prototype was still in the hangar. (ENT: "First Flight")

This unnamed flight controller was played by Victor Bevine.

This ensign security officer, along with two other guards, was sent by Commodore Maxwell Forrest to NX Program's launch bay to apprehend Lieutenant Tucker for helping A.G. Robinson and Jonathan Archer steal the NX-Beta in the middle of the night for a test run in 2143. (ENT: "First Flight")

The unnamed secuirty officer was played by John B. Moody.

This Starfleet crewman worked as technician on the NX Project on Earth in 2143. (ENT: "First Flight")

This Starfleet technician was portrayed by USS Enterprise CV-65 sailor of the year James D. Frey in a cameo appearance. 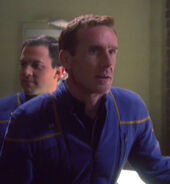 These two Starfleet officers accompanied A.G. Robinson to the 602 Club and shared a drink with him at the bar when Robinson met Jonathan Archer. (ENT: "First Flight")

Both officers were played by background actor who received no credit for their appearance. They filmed their scenes on Friday 14 March 2003 on Paramount Stage 9 and are listed as "Robinson's Pals" on the call sheet.

These two male doctors and a female nurse worked at Starfleet Medical in San Francisco on Earth in 2151 and assisted Doctor Phlox treating the Klingon courier Klaang who had previously been wounded by a plasma rifle. They wore stethoscopes and operated the medical equipment in an isolated room while Admiral Maxwell Forrest and his staff discussed the further being of the Klingon with the Vulcan ambassador Soval and his staff. (ENT: "Broken Bow")

All three surgeons were played by background performers who received no credit for their appearances.
The surgeon scrubs worn by Susan Foley were sold off on the It's A Wrap! sale and auction on eBay.
[5]
Two additional nurses where listed on the call sheet, played by Michelle Van Den Broeck (as "Michele Vandenbroeck") and Laura Berrios. 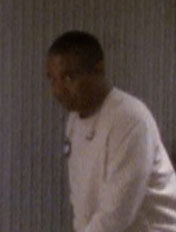 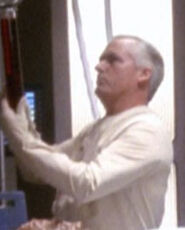 Played by Susan Foley
Add an image to this gallery

The following articles have entries on unnamed Starfleet personnel:

Retrieved from "https://memory-alpha.fandom.com/wiki/Unnamed_Starfleet_personnel_(22nd_century)?oldid=2484076"
Community content is available under CC-BY-NC unless otherwise noted.