A Starfleet Academy cadet was present in the bar on Argelius II, watching the dance of Kara in the presence of James T. Kirk, McCoy and Scott in 2267. He was later accompanied by an Argelian lady from the bar to stroll the foggy streets outside. (TOS: "Wolf in the Fold")

This cadet was played by background actor Gary Wright who received no credit for this appearance.
His uniform was originally worn by Finnegan or his stunt double in "Shore Leave".

This Starfleet Academy cadet was also present in the bar on Argelius II in 2267. (TOS: "Wolf in the Fold")

This cadet was played by an unknown actor who went on to portray an ISS Enterprise crewmember in "Mirror, Mirror" and a Thrall in "The Gamesters of Triskelion".
His costume was originally worn by Finnegan or his stunt double in "Shore Leave".

This Starfleet officer was also present in the bar on Argelius II in 2267. (TOS: "Wolf in the Fold")

This officer was played by the same unknown performer who previously portrayed James.
He wore a turtleneck uniform left over from the two pilot episodes.

This worker was working outside the orbital drydock in the 2270s, when the travel pod with Kirk and Scott was on approach of the USS Enterprise for docking. (Star Trek: The Motion Picture)

He was also working outside the Orbital Dry Dock when Kirk, Uhura and Sulu boarded the Enterprise in 2285. (Star Trek II: The Wrath of Khan)

The workman in space was portrayed by stuntman Tom Morga. ("Tom Morga: Alien Stuntman" special feature, Star Trek: Original Motion Picture Collection (DVD))
For the scene, he was mounted on a motion control rig that spun him around in front of a blue screen, by Douglas Trumbull. (Star Trek: The Magazine Volume 2, Issue 8, p. 69)
The character's second appearance was stock footage from the first film.

This Starfleet Lieutenant served as Christopher Pike's superior officer when he was an Ensign. During an encounter with a Nausicaan, Pike drew his phaser and ran after the pants-less Nausicaan. After tripping during the pursuit, he discovered that he had been entangled in the Nausicaan's pants. Following the encounter, Pike's lieutenant pulled him aside and told Pike that maybe a career path in security wasn't for him. (SNW: "Children of the Comet")

A number of Starfleet officers were present at a meeting of the Federation Council in 2286. (Star Trek IV: The Voyage Home) 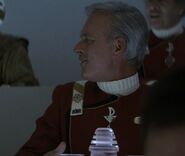 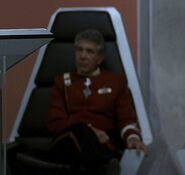 Admiral
Played by an unknown actor 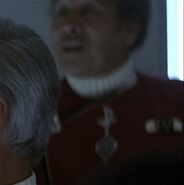 Starfleet guard
Played by an unknown actor
One of the security guards was played by Ron Cragg. [1]

According to Garth of Izar, while under his last command his crew couldn't be persuaded to destroy the Antos natives. He admitted this to James T. Kirk in 2268 when the captain asked him how he could ever believe that a Federation crew would turn on a peaceful race. (TOS: "Whom Gods Destroy")

At the conclusion of the Federation-Klingon War in 2257, Michael Burnham spoke before a panel of admirals and an audience of hundreds when the senior officers of the USS Discovery were awarded the Starfleet Medal of Honor.

The seated audience included at least 27 Andorians, 7 Vulcans and a Tellarite, as well as dozens of Human officers, along with Amanda Grayson. (DIS: "Will You Take My Hand?")

These individuals were involved in the search for the missing USS Jenolan in 2294.

In that year, the search-and-rescue officials cautioned that one of the methods being used for finding the Jenolan, the subspace backtrace, was unreliable due to complications with subspace.

These officials were mentioned in an article from Carl's edition of The Star Dispatch. (DIS: "Terra Firma, Part 2")

These officials were only mentioned in writing.

This operations division shuttle pilot transported Captain Christopher Pike from Earth to spacedock aboard the shuttle Stamets in 2259.

Upon reaching the transport coordinates and communicating with the Enterprise crew, she commented to Pike on how the Enterprise was "all scrubbed up and good as new, sir." (SNW: "Strange New Worlds")

This shuttle pilot was played by Marienne Castro.

This narrator narrated the post-2285 Starfleet Science film, The Tardigrade in Space. (ST: "Ephraim and Dot")

The voice for the narrator was provided by Kirk Thatcher.

These two Starfleet Security guards served at the prison where Leonard McCoy was being held in 2285. They were responsible for guarding the doctor, who was imprisoned after he tried to hire a ship in a bar which should bring him to Genesis.

The first guard allowed Admiral James T. Kirk access to McCoy's holding cell, telling him, "Make it quick, Admiral. They're moving him to the Federation funny farm." When he returned to the cell, he was knocked out by Kirk with a hand chop.

The second guard, a very tall man, yawned as he sat at his station. Sulu, who was waiting for the first guard to return with Kirk, asked him if he was "keeping busy?", to which he replied, "Don't get smart, Tiny." Moments later, during the prison break committed by Kirk of McCoy, this guard was rendered unconscious when Sulu threw him over his shoulder adding, "Don't call me Tiny." (Star Trek III: The Search for Spock)

The second guard was described as "a big, paunchy man", the stunt double for that role was portrayed by Jeff Jensen. The Star Trek Customizable Card Game gives his name as Tahglio.
According to the Star Trek Encyclopedia (4th ed., vol. 1, p. 369), the prison guards were wearing the Starfleet insignia for Starfleet Security on their left breast.
According to a deleted scene, which explained how Sulu knew that "Agents [were] on their way up", the second guard answered an incoming transmission stating that his location was "Sixth Floor Holding".

These two security agents served at the same facility that McCoy was held at in 2285. They were alarmed when Kirk and his crewmates escaped along with McCoy, but were late and couldn't capture them. (Star Trek III: The Search for Spock)

These Starfleet officers watched the christening of the USS Enterprise-B from a drydock in 2293 and applauded. (Star Trek Generations)

All Starfleet officers were played by background performers who received no credit for their appearance.
Among the costumes sold off on the It's A Wrap! sale and auction on eBay were the pants of actor S. Williams and actress M. McCahill as well as the costume of Dale Kasman. [2] [3] [4] 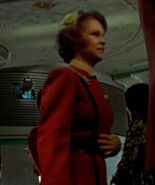 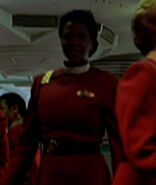 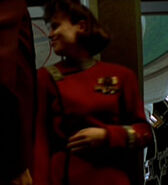 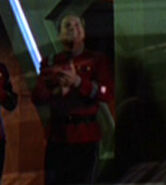 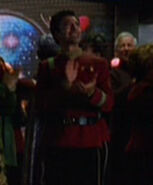 These two high-ranking Starfleet officers attended the maiden voyage of the USS Enterprise-B in 2293 and witnessed the destruction of the SS Robert Fox and the SS Lakul by the Nexus. (Star Trek Generations)

Both officials were portrayed by background performers who received no credit for their appearance.
The pants worn by Rina Bennett were previously worn by Madge Sinclair in Star Trek IV: The Voyage Home and were sold off on the It's A Wrap! sale and auction on eBay. [5] 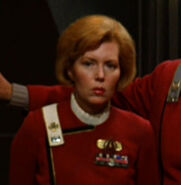 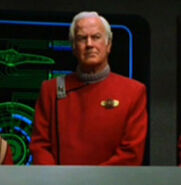