See Unnamed Earth starships for a 22nd century starship that looks suspiciously like this class.

In 2371, at least one of these starships was being constructed at the Utopia Planitia Fleet Yards in orbit of Mars. (VOY: "Relativity")

This appearance is the earliest chronologically dated, in-universe appearance in the series, showing that the class was in service at least two years prior to its 2373 appearance in Star Trek: First Contact. 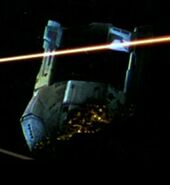 In mid-2373, several of these starships fought against the Borg in the Battle of Sector 001.

One ship engaged the Borg cube near Earth, but was destroyed by the time the USS Enterprise-E led the attack that ultimately destroyed the cube. (Star Trek: First Contact)

Another ship joined in the assault on the Borg cube, led by the Enterprise-E, by firing phasers at the coordinates defined by Captain Jean-Luc Picard. This ship was consumed in the explosion that destroyed the cube. (Star Trek: First Contact)

Although not identified visually, it is possible that these ships are either the USS Appalachia or USS Hiroshima, both vessels referenced in the Star Trek Encyclopedia (? ed., p. ?).

This starship was one of at least two that participated in the Operation Return battle of the Dominion War in 2374. (DS9: "Favor the Bold")

This ship with two others on patrol

...and then there were two.

This starship, along with an Akira-class starship and a Saber-class starship, were on patrol near Deep Space 9 in mid-2374 through early-2375. (DS9: "Statistical Probabilities", "The Magnificent Ferengi", "Afterimage")

The trio later became a duo, with the departure of their Akira-class partner, mid-year. (DS9: "Field of Fire")

In late 2374, this at least one of these starships was part of the Federation assault fleet that attacked the Chin'toka system. (DS9: "Tears of the Prophets")

In late 2375, at least one of these starships was part of the Federation Alliance fleet that was engaged by the Dominion defending Cardassia Prime. (DS9: "What You Leave Behind")

This scene was reused footage from "Tears of the Prophets" with the planets in the background removed and replaced with empty space.

Retrieved from "https://memory-alpha.fandom.com/wiki/Unnamed_Steamrunner_class_starships?oldid=2549508"
Community content is available under CC-BY-NC unless otherwise noted.