The bard sang the Song of the Sages, offering the first verse for free and charging three frangs for the full song. He also begged Chakotay and Tom Paris for money to help him pay for his eye, although Paris later pointed out that the bard's eyepatch had switched eyes overnight.

He unwittingly played a role in removing the Sages when he informed Chakotay and Paris that there was a legend for how the Sages were to leave.

The bard was played by Michael Ensign.

The merchant informed Chakotay and Paris that no one entered the temple without wearing at least one ear. And of course, he was conveniently able to sell them a pair of lobes.

The merchant was played by John Walter Davis.

The sandal maker begged the Holy Sages for help, as his shop was struggling. They scolded him for not exploiting his wife, six children, and ill mother-in-law for labor and offered a copy of the Rules of Acquisition as an aide.

When the villagers decided to literally send the Sages back to the sky on wings of fire, the sandal maker told Chakotay he had prayed for that day to come.

The sandal maker was played by Alan Altshuld.

This Takarian female gave the Ferengi Kol, who was stranded in Takar, oo-mox. (VOY: "False Profits")

Played by Christine Artecona
Add an image to this gallery

These villagers did business on the marketplace in front of the temple in which the two Ferengi, Arridor and Kol, resided in 2373. (VOY: "False Profits")

These individuals are listed as "Temple Square People" on the call sheets of the episode. They filmed their scenes between 20 March 1996 and 22 March 1996 on Paramount Stage 6. 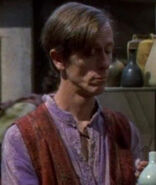 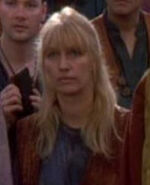 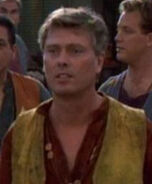 Played by Linnea Soohoo
Add an image to this gallery
Retrieved from "https://memory-alpha.fandom.com/wiki/Unnamed_Takarians?oldid=2451540"
Community content is available under CC-BY-NC unless otherwise noted.