The following is a list of unnamed Takayama-type shuttlecraft.

Montgomery Scott piloted this shuttlecraft to Section 31's Io Facility located near Jupiter where he discovered the USS Vengeance at a spacedock. (Star Trek Into Darkness)

According to a deleted scene, the shuttle was named Copernicus. [1] The registry number of the shuttle was somewhat illegible on screen, but appeared to be BA-3(?). The roof of the craft included the identification numbers DF723 on the outside and FAB.1X456.31 on the inside, though it is unlikely that either of these was the registry of the shuttle based on their locations.

These shuttlecraft were hangared near Starfleet Headquarters with a view of the Golden Gate Bridge. (Star Trek Into Darkness)

Most of these shuttles were reuses of the CGI model for the Enterprise's shuttle 7 with the number still readable, though the ship's registry number was unreadable.
The 8th shuttle was a reuse of the Takayama physical model with the name obscured and the number removed.

These shuttlecraft were operating outside of Starbase 1 while the USS Enterprise was docked there in 2259. (Star Trek Into Darkness)

These shuttlecraft were were in the USS Enterprise's shuttlebay in 2259. (Star Trek Into Darkness) 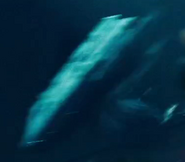 Shuttle 19 (top)
The Enterprise's main shuttlebay was three shuttle storage decks high, with Takayama-type shuttles stored on the 3rd level on the port side. There were at least four shuttles stored there. Military shuttles were stored on the 2nd level.
Shuttle 7 can be seen on a landing approach in the shuttlebay as the advanced long-range torpedoes were being delivered.
For the sequence showing shuttles tumbling from their port side perches, shuttles labeled 7 were seen twice, once in the foreground and once in the background (as shuttle 18 here). Shuttle 4, situated between the two and nearer to 16 while the shuttle labeled as 19 here was closer to shuttle 7, was unlabeled with a name and might have been a CGI creation.

These shuttlecraft were located at Starbase Yorktown in 2263. (Star Trek Beyond)

These shuttlecraft were were in the USS Enterprise's shuttlebay or seen fleeing the starship as she was being destroyed above the planet Altamid in 2263. (Star Trek Beyond)