These Tandaran guards were stationed at Detention Complex 26 in 2152 when Captain Jonathan Archer and Ensign Travis Mayweather were held prisoners at the internment camp. The first four guards escorted Major Klev during his inspection rounds of the Suliban detainees. The latter two guards became, like Major Klev, victims of the explosion placed by a disguised Malcolm Reed in a corridor. (ENT: "Detained")

All six actors received no credit for their appearances but were identified by the call sheets of the episode where they are listed as "Guards".
Five costumes including the ones worn by Dan McCann and Vince Deadrick, Jr. were later sold off on the It's A Wrap! sale and auction on eBay.
[1] [2] [3] [4] [5] 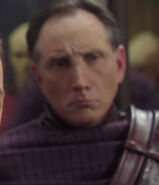 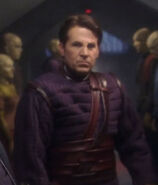 Played by Vince Deadrick, Jr.
Add an image to this gallery

The brother of Major Klev was friends with Danik, a Suliban, when they were children and lived on Tandar Prime. (ENT: "Detained")

This character was only mentioned in dialogue.
Retrieved from "https://memory-alpha.fandom.com/wiki/Unnamed_Tandarans?oldid=2409265"
Community content is available under CC-BY-NC unless otherwise noted.