Three female Tarlac served as nurses in the body enhancement facility aboard Ru'afo's flagship in 2375. They assisted in the process of skin streching in the laboratory aboard the ship. (Star Trek: Insurrection) 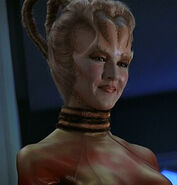 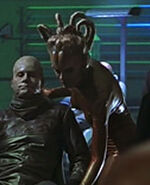 All three Tarlac nurses were played by background actresses who received no credit for their appearance.

Two of them were played by Katrina and Charlie. Their boots were later sold off on the It's A Wrap! sale and auction on eBay. [1] [2] [3]

In the Star Trek Customizable Card Game, the first pictured Tarlac shown here is given the name Sharic.

Close-ups of the actresses behind the scenes are part of the special feature "Westmore's Aliens" on the Star Trek: Insurrection DVD release. 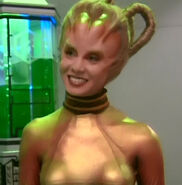 The first pictured actress behind the scenes 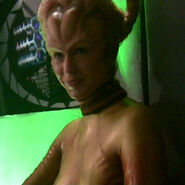 The second pictured actress behind the scenes

The third pictured actress behind the scenes

This officer served at a bridge console aboard Ru'afo's flagship in 2375. He was also present when Captain Jean-Luc Picard deceived Ru'afo and his crew by transporting them aboard the holoship. (Star Trek: Insurrection)

This Tarlac was played by actor Larry Anderson who is listed as "Tarlac Officer" in the end credits of the film.

These Tarlac officers served aboard Ru'afo's flagship in 2375 during their mission in the Briar Patch. They operated the aft consoles on the bridge and one of them was part of an away team which tried to stop Picard's group and the Ba'ku. Two of them fought against Worf during their retake of the flagship's bridge. (Star Trek: Insurrection)

These background actors and stunt performers received no credit for their appearance. 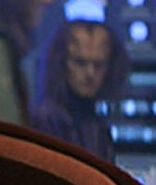 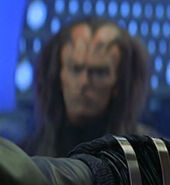 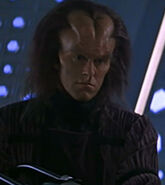 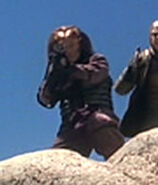 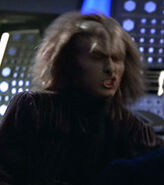 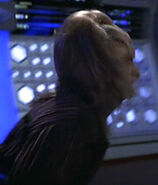 In a deleted scene from Insurrection Data faced two Tarlac soldiers on a cliff and was able to overwhelm them and threw them off the cliff. The Tarlac in this scene were portrayed by stuntmen Brian Avery and Eddie Braun. The "making of" of this scene is part of the special feature "Anatomy of a Stunt" on the Star Trek: Insurrection DVD release. 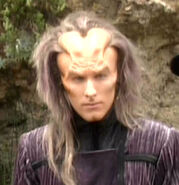 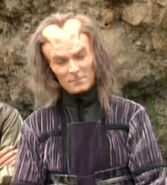 Eddie Braun
Add an image to this gallery
Retrieved from "https://memory-alpha.fandom.com/wiki/Unnamed_Tarlac?oldid=2410090"
Community content is available under CC-BY-NC unless otherwise noted.