The father of Arjin was not joined to a symbiont, but wanted his daughter (Arjin's sister) to be joined. He was a pilot instructor on Gedana post for forty years. After his daughter was successful in passing the rigorous trials for being joined to a symbiont, she decided not to be joined, which went against her father's wishes. She left home, married her spouse and the two never spoke again. Because of this he told Arjin that it fell upon him to be joined. Arjin's father died in 2369. (DS9: "Playing God")

Ensign Barnes of the USS Cerritos once stated to fellow ensign Sam Rutherford on a date that, like him, her father was a cyborg. (LD: "Second Contact") 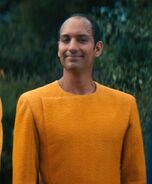 Two Trill commissioners accompanied Vos to meet the USS Discovery away team along with Guardian Xi and Leader Pav in 3189. (DIS: "Forget Me Not")

The two Trill Guardians were played by unknown performers.

These fifty-seven initiates were personally eliminated from the program by the Dax symbiont dating back over a period of 200 years. In 2370, after learning this, Arjin initially asked to be reassigned upon hearing his field docent was to be Jadzia Dax. (DS9: "Playing God")

These initiates were only mentioned in dialogue.

This female worked as an assistant for the Federation News Network (FNN) near the end of the 24th century. (PIC: "Remembrance")

The FNN assistant was played by Arlene Rodruigez-Lopez, who received no on-screen credit for her appearance. 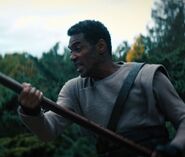 Two Trill guards, under the direction of Commissioner Vos, attempted to apprehend Adira Tal and Michael Burnham in 3189, though Burnham was able to quickly stun them in combat. They later accompanied Leader Pav to the Caves of Mak'ala, where they assisted Xi in monitoring the symbiont pools until Tal and Burnham emerged. (DIS: "Forget Me Not")

The two Trill guards were played by unknown performers.

The Trill Guardian was played by actor Jefrey Alan Chandler.

Two Trill guardians accompanied Xi to meet the USS Discovery away team along with Commissioner Vos and Leader Pav in 3189. (DIS: "Forget Me Not")

The two Trill Guardians were played by unknown performers.

This woman was the spouse to Kela, and the mother of at least two children, Jadzia and her sister; she lived into the 2370s. Since her daughter was in Starfleet, she would worry about her daughter's safety. Jadzia, in turn, recorded "last messages" in case she did not come back from a mission.

In 2372, prior to a battle, Jadzia assured Miles O'Brien that he would live to a ripe old age, and told him she'd put his latest "last message" to his wife and daughter next to her message to her mother. (DS9: "To the Death")

This woman sent her sister, Jadzia, several glasses in 2372. Jadzia found them to be "really ugly". (DS9: "Body Parts")

Unlike Jadzia, she was not joined. (DS9: "Invasive Procedures")

This character was only mentioned in dialogue.
In The Lives of Dax short story "Reflections", Jadzia's sister is called Ziranne (β).

Nine individuals were present when the Dax symbiont was transferred from Curzon Dax to Jadzia Dax. Six of them wore medical gowns, including a female surgeon, the remaining three wore civilian clothes. (DS9: "Emissary")

The female surgeon was played by regular extra Tyana Parr, who received no on-screen credit for her appearance.
The other eight Trill were played by unknown performers.

This host was said to be Crusher's lover's father. He knew Leka Trion and had kept the people of Peliar Zel II at peace for several generations. In reality, he was the prior host of the Odan symbiont. The younger hoped his efforts would be as successful as the elder's. (TNG: "The Host")

This host was only mentioned in dialogue.

This host was originally believed to be Odan, but was in reality only a host body to the symbiont. Upon nearing death in 2367, he ordered Beverly Crusher to save the symbiont and not the body housing it. (TNG: "The Host")

This individual was played by Franc Luz.

These seven hosts all carried the Peers symbiont prior to its joining with Selin Peers. At least one, the first, was a woman. As of 2369, Selin Peers still recalled the symbiont's memories from that time. (DS9: "Dax")

These hosts were only mentioned in dialogue.

These individuals were the parents of Senna. When he was a child, they would sing a lullaby to him. (DIS: "Forget Me Not")

This doctor was working for the Symbiosis Commission and was murdered by Joran Dax. (DS9: "Equilibrium")

He was played by an unknown actor.
According to the short story "Allegro Ouroboros in D Minor", he was named Foris Hajan.

These male and female guard were working for the Symbiosis Commission and helped to arrest Joran Dax for murder. (DS9: "Equilibrium")

This male nurse was assisting Doctor Renhol with the treatment of Jadzia Dax at the medical facilities of the Symbiosis Commission. (DS9: "Equilibrium")

The hosts of the Tal symbiont before Admiral Senna Tal included Jovar Tal, Madela Tal and Cara Tal. (DIS: "Forget Me Not") 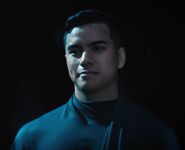 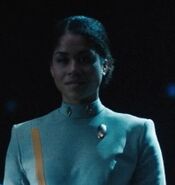 Female Starfleet junior officer
Played by an unknown actor
Add an image to this gallery
Though the Tal hosts seemed to be named chronologically in "Forget Me Not", it was not specified which performer was portraying which host.

This female was getting a tattoo from a Klingon tattoo artist at the Orion embassy outpost on Qo'noS in 2257. (DIS: "Will You Take My Hand?")

This Woman at an Orion cabaret in the Orion embassy outpost on Qo'noS was caressing and being caressed by one of the male Orion dancers, while Sylvia Tilly was speaking to an Orion in 2257. (DIS: "Will You Take My Hand?")

Retrieved from "https://memory-alpha.fandom.com/wiki/Unnamed_Trill?oldid=2713648"
Community content is available under CC-BY-NC unless otherwise noted.