This Osnullus bridge officer with the rank of ensign served on the bridge of the USS Discovery during a battle simulation. (DIS: "The Butcher's Knife Cares Not for the Lamb's Cry")

In November 2256, this officer was speaking to a fellow female officer in the corridor outside Cadet Tilly's quarters when Saru offered Michael Burnham blueberries. (DIS: "Context Is for Kings")

After Airiam's death, this officer attended her funeral. (DIS: "The Red Angel")

When Michael Burnham decided to take the Discovery forward in time to the 32nd century, with no chance of return, this officer was among those who volunteered to accompany her and leave behind her former life. (DIS: "Such Sweet Sorrow", "Such Sweet Sorrow, Part 2")

This officer was played by Avaah Blackwell. [1]
Glenn Hetrick, Department Head of Prosthetic and Special F/X Makeup for
Star Trek: Discovery, named this officer "Osnullus". The Alchemy Studios website features images of the head sculpt and hand sculpt of this officer. [2]

An Osnullus sciences officer in 2256

This Osnullus sciences officer with a bluish-purple head protruding backwards was in the mess hall as Saru watched the prison shuttle leave. (DIS: "Context Is for Kings")

In 2257, this officer entered the mess hall after their duty shift, just after Me Hani Ika Hali Ka Po had caused the food synthesizers to create a mess. (ST: "Runaway") Later that year, this officer was serving on the bridge. (DIS: "Brother", "Point of Light")

After Airiam's death, this officer attended her funeral. (DIS: "The Red Angel")

Just like the other member of their species, this officer was played by Avaah Blackwell. [3]
Both officers of this species have been called "Osnullus" behind the scenes.

Doctor Hugh Culber told Paul Stamets he was going to assist the chief medical officer with an Andorian tonsillectomy. (DIS: "The Butcher's Knife Cares Not for the Lamb's Cry")

As far as it is understood, this character has not appeared in the series. It is possible that the commander in medical uniform, played by Jason Deline, seen in "Magic to Make the Sanest Man Go Mad" in the shuttlebay was the CMO.

This female doctor was accepted into the Command Training Program aboard the Discovery and participated in a shipboard half marathon in 2257 with Sylvia Tilly, Albert Kim and Andre Haynes, finishing second with a time of 09:14:25 after Tilly took a last minute lead. She was absent from Bridge shadow exercises the trainees participated in later that day. (DIS: "Point of Light")

She was among the crewmembers who volunteered to stay on board the Discovery and accompany Burnham when she took the ship forward to the 32nd century to elude Control, with no chance to return. Along with Doctor Tracy Pollard, she was on duty in sickbay helping the injured during the Battle near Xahea. (DIS: "Such Sweet Sorrow, Part 2")

This officer was played by Kyana Teresa and was not credited for her first appearance.
This trainee's name was not quite visible on Saru's PADD of marathon times, though her last name starts with an "L."

This crewmember was on the bridge when his console exploded while searching for Paul Stamets and Hugh Culber. (DIS: "Saints of Imperfection")

This crewman was played by an unknown stunt performer.

These two crewmembers left the shuttlebay of Discovery when Michael Burnham and Ash Tyler entered to watch the Gormagander beamed aboard. (DIS: "Magic to Make the Sanest Man Go Mad")

The two actors are listed as "Deck Crew #1" and "Deck Crew #2" in the end credits of the episode. 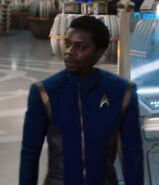 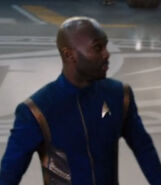 Played by Hamza Fouad
Add an image to this gallery

This Human male sciences officer used a hoverchair, having been wounded in a battle with the Klingons. Ash Tyler made a toast to those who were injured in the war during a party on the USS Discovery. (DIS: "Magic to Make the Sanest Man Go Mad")

He was passing the newly arrived team from USS Enterprise in a corridor when they prepared for an away mission, this time in a wheelchair. He later passed Lt. Commander Paul Stamets. (DIS: "Brother")

He was present, in the front row, at the funeral of Lt. Commander Airiam. (DIS: "The Red Angel")

The wounded crewman was played by disabled actor George Alevizos. He received no credit for his appearances.

This female sciences officer with teal-colored hair was in the mess hall when Burnham and the other prisoners first came on the Discovery, and later when Burnham and Tilly first met Ash Tyler. (DIS: "Context Is for Kings", DIS: "Choose Your Pain", DIS: "Lethe")

This officer was played by an unknown performer.

This male sciences officer with large, segmented ears passed Saru and Michael Burnham in the corridor as Saru was offering Burnham blueberries. He was later in the mess hall as Saru watched the prison shuttle leave and when Burnham and Tilly first met Ash Tyler. (DIS: "Context Is for Kings", DIS: "Lethe")

During a party, he danced with a female member of the crew. (DIS: " Magic to Make the Sanest Man Go Mad")

He was working in engineering when the spore drive was activated and Paul Stamets became catatonic. (DIS: "Into the Forest I Go")

This officer was played by an unknown actor. His distinctive ears are not unlike those of the Tiburonians.

This sciences division officer passed Hugh Culber in the mess hall when he was talking to a alien crewman. (DIS: "Through the Valley of Shadows")

These crewmembers attended the funeral of Lieutenant commander Airiam in 2257. (DIS: "The Red Angel")

Among these crewmembers are four of "Osnullus'" species and at least four different Tellarites.

This Human male Starfleet officer was the pilot of the shuttle that transported Captain Lorca and was assaulted by Klingons. He was killed in the ensuing struggle. (DIS: "Choose Your Pain")

The shuttle pilot was played by stunt actor Simon Northwood.

This medical officer was present in the shuttlebay aboard Discovery when a Gormagander was beamed aboard. During the timeloop caused by Harry Mudd, he was vaporized by a weapon of Mudd. He held the rank of commander. (DIS: "Magic to Make the Sanest Man Go Mad")

This medical officer was played by actor Jason Deline.

This medical crewman was played by Marco Perretta who received no credit for his appearance.

This medical technician performed the data erase on Lieutenant Commander Airiam following her death in 2257. (DIS: "The Red Angel")

This medical technician was portrayed by Makeup Department Head James MacKinnon in an uncredited cameo role.

This nurse ordered class 4 casualties in sickbay and class 3 in the corridor. (DIS: "Such Sweet Sorrow, Part 2")

The nurse was played by Zarrin Darnell-Martin.

This jogger was a crewmember aboard the USS Discovery. (DIS: "Magic to Make the Sanest Man Go Mad")

He was played by actor Izaak Smith.

This Tellarite Starfleet officer attended Airiam's funeral in 2257. (DIS: "The Red Angel") Later, he walked past Saru and Michael Burnham. (DIS: "Through the Valley of Shadows")

The Tellarite crewman was played by an unknown actor.

This Human male lieutenant served as a transporter technician aboard the Discovery.

He operated the transporter when Michael Burnham and Ash Tyler infiltrated the Sarcophagus. (DIS: "Into the Forest I Go")

He also operated the transporter when Michael Burnham and Emperor Philippa Georgiou were beamed aboard Discovery from the ISS Charon. (DIS: "The War Without, The War Within")

The officer was played by actor Michael Ayres.

He also transported Leland and Phillipa Georgiou from their ship. (DIS: "The Red Angel")

The officer was played by a unknown actor.
His headgear appears to be the 23rd-century equivalent of a VISOR.
Retrieved from "https://memory-alpha.fandom.com/wiki/Unnamed_USS_Discovery_personnel?oldid=2462708"
Community content is available under CC-BY-NC unless otherwise noted.