The Vissian chief engineer was married to Calla. The two ultimately decided they would have a baby, and after a long wait, they were finally given a cogenitor with which to breed.

In 2153, the Vissian chief engineer was among the members of the delegation who were welcomed aboard Enterprise NX-01 as a part of a cultural exchange. During the exchange, he gave Commander Tucker, the chief engineer of Enterprise, a tour of the Vissians' engine room, but Tucker was particularly curious about the engineer's cogenitor.

The Vissian chief engineer was played by actor F.J. Rio.
His costume from this episode was later sold off on the It's A Wrap! sale and auction on eBay. [1]

These Vissians were members of Captain Drennik's crew that was studying a hypergiant star when his ship made contact with Enterprise. The first five visited the mess hall aboard Enterprise as part of the delegation. The sixth crewmember was working in the engine room aboard Drennik's starship when the chief engineer gave Trip Tucker a tour. (ENT: "Cogenitor")

The Vissian crewmembers were played by background performers who received no credit for their appearance including Jeff Welsh, Joshua Brown, and contest winner Nelson Rose.
Their costumes were later sold off on the It's A Wrap! sale and auction on eBay. [2] [3] [4] [5] [6] [7] [8] [9] 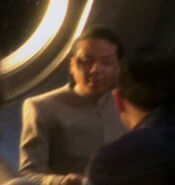 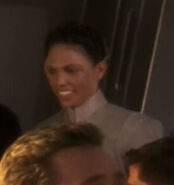 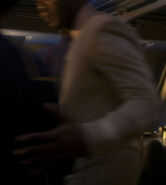 Add an image to this gallery
Retrieved from "https://memory-alpha.fandom.com/wiki/Unnamed_Vissians?oldid=2408122"
Community content is available under CC-BY-NC unless otherwise noted.