This captain of a survey ship that was on a mission to study Earth after the launch of their first artificial satellite, Sputnik I, in 1957. A malfunction caused the ship to crash land in Carbon Creek, Pennsylvania. He was killed in the crash, and his body later cremated to prevent the Humans from discovering him. (ENT: "Carbon Creek")

This Vulcan was played by David Selburg, neither this individual nor his ship were given names in the episode. The costume worn by Selburg as the Vulcan captain was sold off in the It's A Wrap! sale and auction on eBay. [1]

This officer served under Captain Tellus on the D'Vahl, which rescued T'Mir and Stron, two survivors of a Vulcan ship that crashed on Earth in January of 1958. T'Mir and Stron did not tell him that a third survivor, Mestral, had chosen to remain on Earth. (ENT: "Carbon Creek")

This Vulcan was played by an unknown actor. 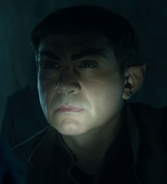 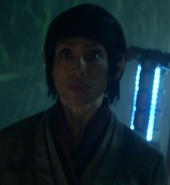 This survey party was on a mission in North America on Earth, sometime around the 1970s, when they were accidentally discovered in the woods one night by the Human child, Martin Wells. The male Vulcan tried to mind meld with Wells to make him forget the encounter, before both landing party members were beamed away. (PIC: "Mercy")

The timing of their arrival nearly coincides with the next scheduled survey ship to arrive at Earth, with the intention of "running more statistical scans from high orbit…", previously mentioned in the ENT Season 2 episode "Carbon Creek".
Français Italiano Nederlands
Community content is available under CC-BY-NC unless otherwise noted.
Advertisement