This Vulcan was played by an actor with the last name Byron, who filmed his scenes on Friday 8 February 1991 on Paramount Stage 8.
His costume was previously worn by actor William Denis as Ki Mendrossen in the episode "Sarek".

These children were only mentioned in dialogue.

In 2380, two armed Vulcan men aboard a long range shuttle were nerve pinched by Sam Rutherford, their robes and shuttle stolen by a team from the USS Cerritos that also included Shaxs and Andy Billups during a mission to a museum on Vulcan. Shaxs referred to the two as "Spock and Spock." Shaxs, Billups, and Rutherford parachuted out of the shuttle as it was entering the atmosphere. (LD: "Veritas")

This racquetball player was Julian Bashir's finals opponent in the Sector Championships as team captain at Starfleet Medical Academy in 2368. 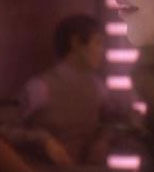 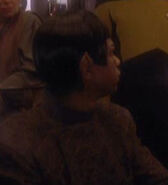 All three Vulcans were played by background performers who received no credit for their appearances. They can be seen during a flashback while Spock performed the Vulcan mind meld with Kirk on Delta Vega. 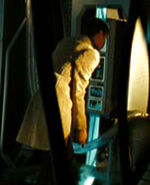 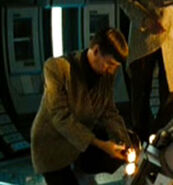 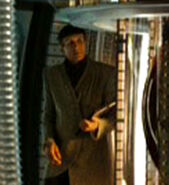 Exceptions to this are the predominantly Vulcan crews from:

These two Vulcans were in the shuttle landing area of "Little Qo'noS" on Tulgana IV in 2380 when the Yosemite took off under the control of General K'orin. (LD: "Envoys")

This Vulcan was only mentioned in dialogue.
The Distant Shores short story "Letting Go" gives her name as Selmar (β). 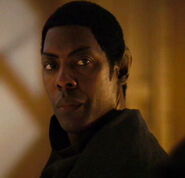 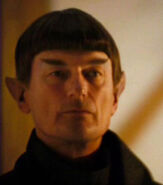 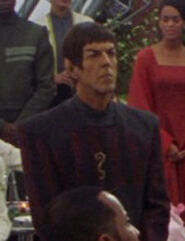 Played by an Dieter Hornemann
Add an image to this gallery
Retrieved from "https://memory-alpha.fandom.com/wiki/Unnamed_Vulcans_(24th_century)?oldid=2687608"
Community content is available under CC-BY-NC unless otherwise noted.