This patron was leaving Chez Sandrine in Marseille on Earth in an alternate timeline experienced by Harry Kim in 2372 when Kim entered the bar. (VOY: "Non Sequitur")

This Yridian was played by regular background actor Louis Ortiz who filmed his scene on Friday 21 July 1995 on Paramount Stage 16.
The call sheet listed him as "Masked alien".

During his stint as a "Solid" in 2373, Odo had an embarrassing experience in which he was chasing these two dabo cheaters and instinctively jumped off the second level of the Promenade. He confessed to Sisko that he had intended to turn into a Tarkalean condor. Sisko thought doing so would have been impressive; Odo agreed, which made his experience all the more humiliating. (DS9: "Nor the Battle to the Strong")

This individual resided on Deep Space 9.

In 2369, he was talking to a Human female on the Promenade, shortly before the imaginations of the residents became reality. (DS9: "If Wishes Were Horses")

Later that year, he was talking to Morn and witnessed that a Bajoran vendor refused to sell a jumja stick to Chief Miles O'Brien. (DS9: "In the Hands of the Prophets")

In 2375, he was sitting a Quark's having a beverage while the station was under Dominion occupation. (DS9: "Favor the Bold")

This Yridian was played by an unknown actor. 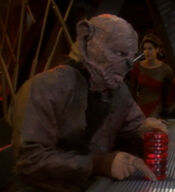 This debtee was owed money from Elim Garak. In 2371, Garak speculated that the Yridian in question might have attempted to murder him. (DS9: "Improbable Cause")

The sister of Yranac was the only reason the latter chose to speak with William T. Riker, during their search for Jean-Luc Picard. This after Worf explained that they were looking for the man who had impregnated Riker's "sister", who was, in the case of their ruse, Beverly Crusher.

He later bargained with Riker, stating, "Family honor is important. If someone had defiled my sister I would do anything, pay anything, to find the one responsible." (TNG: "Gambit, Part I")

This character was only mentioned in dialogue.
Retrieved from "https://memory-alpha.fandom.com/wiki/Unnamed_Yridians?oldid=2473252"
Community content is available under CC-BY-NC unless otherwise noted.