After Neelix discovered that Michael Jonas was secretly working with the Kazon-Nistrim in 2372, he attempted to stop Jonas by attacking him with a claw-like engineering utility. (VOY: "Investigations")

In 2372, after Tom Paris left the USS Voyager and was kidnapped by the Kazon-Nistrim, Paris used a hacking tool to access the systems of the raider he was in to determine the identity of a mole on Voyager. The device also had an explosive which could be timed. (VOY: "Investigations")

When the holodeck of the Enterprise-D had malfunctions in 2364, Geordi La Forge, Wesley Crusher, and two technicians used these three engineering tools for diagnostic and repair. (TNG: "The Big Goodbye") 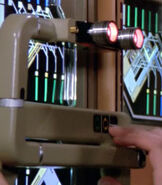 A pen-like repair tool
Add an image to this gallery

Tom Paris used this laser tool for repairs in 2371 while working at the construction site at the New Zealand Penal Settlement. (VOY: "Caretaker")

The term "laser tool" comes from the props section on the call sheet for the day of filming.

On First Contact Day in 2385, the A500 unit F8 used this laser tool as a makeshift weapon to kill several workers at Tri-hy station A19 before turning it on himself. (PIC: "Maps and Legends")

While searching for his missing EJ7 interlock O'Brien opened his toolbox with several engineering tools in it in 2369. (DS9: "In the Hands of the Prophets")

This tool was used by Captain Jean-Luc Picard in 2063 doing modifications/repairs on a phaser rifle while talking to Lily Sloane in the observation lounge aboard the USS Enterprise-E. (Star Trek: First Contact)

This engineering tool was used by Commander Tucker in 2153 to change the modifications the Tarkalean female made to the ship's avionics control system. (ENT: "Regeneration")

Neela wanted to use this engineering tool to close a security seal after she finished repairs in the security office. Chief O'Brien told her that this was the wrong tool and she had to use an EJ7 interlock instead because it was a security seal. (DS9: "In the Hands of the Prophets")

This pen-like engineering tool was used by Nog to scramble the subspace transmission between himself and Jake Sisko and the Bajoran Sirco Ch'Ano in 2369. (DS9: "Progress")

The Takret Militia brought several pieces of technological equipment aboard Enterprise NX-01 when they boarded the ship in 2152. Several pieces were placed in engineering in front of the warp injector. (ENT: "The Catwalk")

These engineering tools were used in 2151 aboard Shuttlepod 1 by Malcolm Reed when he was preparing the away mission to the surface of Archer's Comet and the drilling rig. (ENT: "Breaking the Ice") 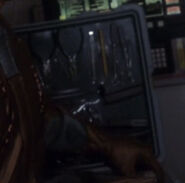 Several tools in a box
Add an image to this gallery

This engineering tool was used by Chief Miles O'Brien in 2372 on Deep Space 9 to double check that the new console he installed in ops, as part of the station's upgrades, was working correctly. (DS9: "The Way of the Warrior")

Rom later used the same device to perform a com relay bypass in 2373. (DS9: "The Assignment")

This object was used beside the USS Voyager's warp core in 2374 while attempting to get it functional again after the ship had Borg modifications installed by Seven of Nine. (VOY: "The Gift")

This prop was reused for other purposes, including an object on Qatai's ship in VOY: "Bliss".

This piece of technology was part of the warp engine aboard the Earth Cargo Service freighter ECS Fortunate and damaged during the Nausicaan attack on the ship in August of 2151.

Matthew Ryan brought this piece aboard Enterprise NX-01. According to Travis Mayweather it was older than chief engineer Trip Tucker and he would get a kick out of this. The quartermaster aboard Enterprise won't have anything like that but engineering should be able to synthesize one. Tucker later told that the valve seals of the piece were shot and he needed about fourty minutes to synthesize new ones while analyzing this piece in his laser micrometer.

When Captain Jonathan Archer later confronted Ryan in his ready room and asked if anything he got from Enterprise was working accordingly, Ryan told him that some of the connections were off by a few microns. (ENT: "Fortunate Son")

This piece of technology was not named in the episode.
The call sheet of the episode is listing it as "Damaged Warp Eng. Component" in the prop section.
Retrieved from "https://memory-alpha.fandom.com/wiki/Unnamed_engineering_tools?oldid=2678873"
Community content is available under CC-BY-NC unless otherwise noted.