This unnamed spacedock was operated by the Federation in the 23rd and 24th centuries.

There was an illustration of this facility in the body of a Starfleet Command order that was sent to the USS Atlantis. (TNG: "Conspiracy")

The illustrated spacedock might be the same as the one mentioned in the text.
A schematic of a spacedock is seen on the bridge displays of the USS Reliant and the USS Enterprise in Star Trek II: The Wrath of Khan. The image was later reused in a brief appearance in "Conspiracy". According to Rick Sternbach, the image was that of a gravity generator he did for Star Trek: The Motion Picture. He thinks this image appeared on the starboard forward part of the bridge of the USS Enterprise. [1]

In 2365, this outpost in the Gamma 7 sector was the destination of the USS Lantree after her crew began dying from a mysterious illness. It was the nearest outpost to their position. (TNG: "Unnatural Selection")

This outpost was located in the Guernica system.

In 2367, the USS Enterprise-D was transporting a shipment of scientific equipment from Starbase 313 to this outpost. (TNG: "Galaxy's Child")

In 2368, Cadets from Nova Squadron used their emergency transporters inside the training shuttles to beam to the emergency evac station on Mimas. (TNG: "The First Duty")

This mining facility was located on a dilithium-rich asteroid in the 2370s. In 2378, it employed holograms based on the Mark I version of Starfleet's Emergency Medical Holographic program for its end-of-life. It necessarily contained hololabs for their maintenance. (VOY: "Author, Author")

In 2364, this outpost, near the border of the Romulan Neutral Zone, reported the presence of seven Romulan battle cruisers, which were within sensor range, to Starfleet. The border outpost would subsequently send a distress call, which was answered by both the USS Berlin and the USS Enterprise-D. (TNG: "Angel One")

These two space stations were in orbit of Qualor II, and were among the various hulks that made up the Surplus Depot Z-15. (TNG: "Unification I")

These two studio models were presumably early concepts for the Earth Spacedock.

In 2399, at least two floating cities were present near the Daystrom Institute in Okinawa on Earth. (PIC: "Remembrance", "The End is the Beginning", "Nepenthe")

Command base near the Romulan Neutral Zone

During the Neutral Zone Incursion of 2266, this command base, which was closest to the Romulan Neutral Zone, was fed tactical reports by the USS Enterprise as she hunted the Praetor's flagship. The command base signaled its support of Captain James T. Kirk's actions. (TOS: "Balance of Terror")

This starship base was only mentioned in dialogue.

The Corinth IV starship base was a Federation base located at Corinth IV.

In 2266, the base's commanding officer was Space Commander José Dominguez. That year, the USS Enterprise delivered Mexican red chili peppers to the base. (TOS: "The Man Trap")

Lisa Cusak and one of her sisters served on this starbase at the same time sometime prior to 2371, an experience Cusak described as a "nightmare" in a 2371 (her)/2374 (him) conversation with Benjamin Sisko. (DS9: "The Sound of Her Voice")

In 2368, this starbase received a message from the USS Enterprise-D about the transport ship Kallisko. This ship had been attacked by the Crystalline Entity, killing the crew and powering down the warp and impulse engines. In the message from the Enterprise-D, a request was made of this starbase, which was the nearest to the transport's position, that it send a crew to recover the Kallisko. (TNG: "Silicon Avatar")

This station was painted by Rick Sternbach, with the idea that Picard might have served on it earlier in his career. Sternbach called it a Starbase. He also speculated that it might or might not have been an earlier version of Jupiter Station, due to the similar structure. [2]

In 2353, this starbase was attacked by the Tholians.

At the time, the civilian strategist Kyle Riker was using the base as his 'office' as he consulted Starfleet on its conflict with the Tholians. Riker was the only survivor of the attack. (TNG: "The Icarus Factor")

This starbase was only mentioned in dialogue.
This base was named "Starbase 311" in the novel "Deny Thy Father".

These starbases were only mentioned in dialogue.
The incident coincided with the destruction of a number of other outposts later implied to be destroyed by the Borg, but it was never specified if these starbases were among the stations lost.

In 2365, after an aborted war game exercise, the USS Enterprise-D towed the USS Hathaway to this starbase, which was the base closest to the Braslota system. (TNG: "Peak Performance")

Starbase near the Delta Triangle

This starbase, which was the closest one to the Delta Triangle, received a recorded exchange between the USS Enterprise and a Klingon battle cruiser three weeks after the event had occurred. (TAS: "The Time Trap")

Starbase near the Gamelan system

In 2367, the USS Enterprise-D contacted the nearest starbase after it received a message informing them that the mining shuttle Nenebek was delayed. The Nenebek was ferrying Captain Jean-Luc Picard and Ensign Wesley Crusher to a mediation on Pentarus V. At the time, the Enterprise was occupied with the destruction of a garbage scow which threatened the inhabited planet Gamelan V. The Enterprise requested a search vessel to find the Nenebek and recover their crewmembers, to which the starbase responded back that the closest starship was almost a week away. (TNG: "Final Mission")

The USS Enterprise reported to this base during its mission to the planet Neural in 2268. (TOS: "A Private Little War")

Starbase near the Pleiades Cluster

This starbase was located near the Pleiades Cluster.

After Captain Jean-Luc Picard of the USS Enterprise-D declared an indefinite quarantine on Velara III in 2364, his ship transported the three surviving terraformers to this base. (TNG: "Home Soil")

An unused image of Talos IV's surface prepared for "The Cage" implied it to be in or near the Pleiades Star Trek Encyclopedia (4th ed., vol. 2, p. 171), while "If Memory Serves" claimed that Starbase 11 was just half a light year from Talos.

Starbase near the Romulan Neutral Zone

This starbase was located on a planet near the Romulan Neutral Zone.

In 2269, Doctor Sevrin and his followers stole the space cruiser Aurora from this facility. After the USS Enterprise had apprehended Dr. Sevrin's group, the starship sent a message to this base informing it that they had the individuals responsible for the theft, but the Aurora itself was destroyed during the chase. Later, after rescuing this group from the planet Eden, they were transported to this base. (TOS: "The Way to Eden")

After graduating from the training program for enlisted personnel, and prior to his being posted to the Enterprise-D, medical technician Simon Tarses served at these outposts. (TNG: "The Drumhead")

The Federation had a research station on Ventax II. Some of the station's personnel were taken hostage as the facility was overrun during a riot in a period of civil unrest on the planet in 2367. This station was located in an inhabited area. (TNG: "Devil's Due")

This outpost was located in the same quadrant as Deep Space Station K-7, and was close to Donatu V. Before the USS Enterprise changed course, the distance between the starship and the outpost would have been one parsec. (TOS: "The Trouble with Tribbles")

The Qomar homeworld had at least four orbital stations during the USS Voyager's visit in 2376. (VOY: "Virtuoso")

Stations 3 and 4
Add an image to this gallery

Quarra had at least three large orbital stations located near the approach vector that USS Voyager took as it arrived at the planet in 2377. (VOY: "Workforce")

Two of the three installations 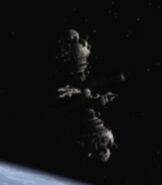 The third installation
Add an image to this gallery

In 2364, a number of Romulan outposts bordering the Neutral Zone were attacked. Federation outposts in the area had also been attacked in exact same manner. Given the level of destruction, the Romulans realized the culprit could not be the Federation, and the the two major powers agreed to share information in solving the mystery. (TNG: "The Neutral Zone") Later, identical attacks were found to be committed by the Borg. (TNG: "Q Who")

Station near the Klingon border

The USS Voyager was due to rendezvous with the Vostigye at one of their space stations in 2373, but found it destroyed. All that remained was a debris field encompassing nearly eighty cubic kilometers, composed of materials such as Boronite, sarium, and carbon-60 composites.

There were sixty Vostigye scientists at the station, but no survivors were found. (VOY: "Real Life")

In 2369, Lore and his rogue Borg faction utilized a base on the surface of an unidentified planet. (TNG: "Descent", "Descent, Part II")

Retrieved from "https://memory-alpha.fandom.com/wiki/Unnamed_fixed_installations?oldid=2729537"
Community content is available under CC-BY-NC unless otherwise noted.