Start a Wiki
This article or section is incomplete This page is marked as lacking essential detail, and needs attention. Information regarding expansion requirements may be found on the article's talk page. Feel free to edit this page to assist with this expansion.

The following is a list of unnamed food from the 22nd century.

These fruits were given from an Akaali woman to a man in a street of a city on the Akaali homeworld in 2151. He smelled at the fruits. (ENT: "Civilization")

Grapes were used to represent these fruits.

The Arakonian dessert was a type of dessert dish.

The exiled alien Tarquin tried to serve a gelatinous Arakonian dessert to Hoshi Sato while trying to woo her. He compared her reluctance to try it to her initial childhood reaction to her grandmother's soba noodles, a memory he drew from her mind. (ENT: "Exile")

In the final draft script of "Exile", this dessert was described as "a strange-looking mound of gelatinous alien food."

The dish seen on the table at the end of ENT: "Terra Nova" looks some sort of spaghetti and was eaten by the four officers with chopsticks. As T'Pol was a vegetarian, no meat was visible in this dish. The call sheet is simply listing "food as per script".
The dishes served during the visit of Captain Vanik in ENT: "Breaking the Ice" seem identical. T'Pol and Vanik had
pok tar though Captain Archer and Trip Tucker seem to have a different dish including salad.

A dish in the captain's mess
(ENT: "Terra Nova")

Dishes in the mess hall
(ENT: "Breaking the Ice")

Pok tar and other dishes
(ENT: "Breaking the Ice")
Add an image to this gallery

Digger meat and other things in a bowl 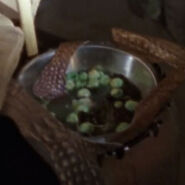 Food in a bowl

Beside the meat of Diggers, some other ingredients were seen in bowls in the gutting room of the Novans on Terra Nova. (ENT: "Terra Nova")

The Takret Renth prepared this meat in a pan over a cooking plate placed over a plasma manifold. Commander Trip Tucker, angry about this behavior, took away the pan and told that chef will be asked to prepare it for them. (ENT: "The Catwalk")

The call sheet listed this food as "alien meat sizzling".

In 2152, Travis Mayweather disparaged this food, comparing it to valve sealant. (ENT: "Detained")

This green paste-like food was placed in a bowl and eaten by the Tellarite Skalaar on board his Tellarite shuttle in 2153. (ENT: "Bounty")

Retrieved from "https://memory-alpha.fandom.com/wiki/Unnamed_food_(22nd_century)?oldid=2436971"
Community content is available under CC-BY-NC unless otherwise noted.