Start a Wiki
Multiple realities
(covers information from several alternate timelines)
This article or section is incomplete This page is marked as lacking essential detail, and needs attention. Information regarding expansion requirements may be found on the article's talk page. Feel free to edit this page to assist with this expansion.

The following is a list of unnamed food from the 24th century.

This food item, brick-like in nature, was distributed periodically in the Akritirian maximum security detention facility through its chute. (VOY: "The Chute")

The marketplace on a planet in the Delta Quadrant offered fruits, roots and apple-like ones, and bread-like types of food. One of the fruits was placed on Caylem's head by Augris and a bread-like food was placed in his mouth after he entertained the Mokra Order soldiers. (VOY: "Resistance")

Several fruits
Add an image to this gallery

This unnamed fruit was a sweet berry indigenous to Bajor.

Ro Laren once suggested to Macias that such a berry could be used as a substitute for blueberry. (TNG: "Preemptive Strike")

This food, bearing some resemblance to bread, was served accompanying with a stew by Lidell Ren in 2371. (VOY: "Ex Post Facto")

In 2372, a cucumber-like food was found growing on vines two hours from a camp set up by the crew of USS Voyager. Kathryn Janeway told Harry Kim and Tom Paris to them and some eggs they'd found to Neelix so he wouldn't have to prepare beetle stew. (VOY: "Basics, Part I")

This dessert was served to Kes and the Vhnori Ptera in 2371 in the mess hall aboard Voyager. (VOY: "Emanations")

The call sheet named this dish "dessert" in the props section.
The shooting schedule, p. 4, listed it as "dessert flambe" and is also listing the involvement of Neelix actor Ethan Phillips. However in the final episode, Phillips did not appear and the dessert was never seen on fire.

Gray paste was Lyndsay Ballard's name for the chief staple of the Kobali diet. She recalled eating it for three years. (VOY: "Ashes to Ashes")

During a meeting with the Paqu and Navot leaders on Deep Space 9, an assortment of hors d'œuvres were served, including larish pie. (DS9: "The Storyteller")

In an alternate timeline, a variety of food was offered to Tom Paris and Chakotay for dinner by Annorax. He told them that all were delicacies from extinct civilizations he erased from history. (VOY: "Year of Hell, Part II")

Various fruits, including waterplums, were on sale on the Mari homeworld in 2274. According to Neelix, they were some of the loveliest fruit I've seen in a long time. (VOY: "Random Thoughts")

This dish was chosen by the Vulcan nurse aboard Voyager when she visited the mess hall in 2371. (VOY: "Caretaker")

In 2374, Tom Paris had this dish in the mess hall when Harry Kim joined his table. While Kim was only talking about the letters from home, Paris was wondering about this dish. It tasted vaguely like chicken, but had the consistency of corn husks. (VOY: "Hunters")

Following his boarding of Voyager in 2371, Neelix replicated some food, meat with bones and salad and pasta like food, which he consumed in his guest quarters. Tuvok eyed the remains of this feast when looking for Neelix. (VOY: "Caretaker")

In 2372, while taping his first episode of A Briefing with Neelix, Neelix was making a reddish liquid food. (VOY: "Investigations")

When captain Kathryn Janeway halucinated her wake in 2374, she saw Harry Kim racounting an USS Voyager away mission containing Kim and Janeway once found bushes of over-ripe fruit. Kim claimed he must have eaten half a kilo, and that his mouth and hands were all purple, as were those of his captain. (VOY: "Coda")

Although the scene was a imagined, the events presumably happened, as Janeway would have noticed if it were otherwise.

In 2373, Neelix and Kes met for a lunch date on the holodeck in the Paxau Resort holoprogram. Both had variants of salad for lunch. (VOY: "Warlord")

The call sheet lists only "Salad per script" in the prop section. 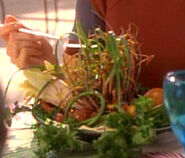 Kes' salad
Add an image to this gallery

In 2370, while at Quark's, Benjamin Sisko ordered "a cup of Alterian chowder, uttaberry crepes, and a slice of-" something before being interrupted by an urgent message from Kira Nerys. Sisko cancelled his order following the communication. (DS9: "Armageddon Game")

In 2369, Jean-Luc Picard promised Nella Daren a special dessert that he had first tasted on Thelka IV, but he was interrupted by a call from Worf. (TNG: "Lessons")

While Kira Nerys was visiting Mullibok on Jeraddo in order to convince him to leave, both of them prepared a number of vegetables, including one rooted vegetable, for a supper. (DS9: "Progress")

While going through an elaborate brainwashing scenario created by the Vori, Chakotay arived in a settlement where he was offered food. Chakotay claimed it was delicious, although it should be noted that he was under the influence of a combination of mind control techniques, including Photometric projection, heightened emotional stimuli, and highly sophisticated psychotropic manipulation. (VOY: "Nemesis")

Retrieved from "https://memory-alpha.fandom.com/wiki/Unnamed_food_(24th_century)?oldid=2447412"
Community content is available under CC-BY-NC unless otherwise noted.