This so-called "unknown alien scientist" was the inventor of the Tantalus field.

According to Marlena Moreau, "I always thought that was funny, the great, powerful Captain Kirk who owes everything to some unknown alien scientist and a plundered laboratory." James T. Kirk justified his (counterpart's) actions, by beginning to state that "Well, if you don't take advantage of your opportunities…" before Moreau finished, "…you don't rise to the command of a starship or even higher." Kirk later used it in his rise to power by killing his many enemies. (TOS: "Mirror, Mirror")

This scientist was only mentioned in dialogue.

This alien slave worked for the Tholians aboard the Federation starship USS Defiant under the Gorn slave master Slar in 2155.

When that ship was stolen from a Tholian dock and commandeered by Jonathan Archer, an unknown reptilian creature attacked and killed Kelby, one of Archer's officers. The alien slave worker was interrogated in the Defiant's briefing room as to the identity of the murderer. Eventually, he revealed that the killer was his slave master, Slar. (ENT: "In a Mirror, Darkly, Part II")

The alien and his species were unnamed in both the episode's script and the episode itself, where he was played by Pat Healy. His immediate fate after being interrogated is unknown, but assuming he wasn't killed by Archer he would have been confined to the ISS Avenger with the other non-Terrans, and then killed when that ship was destroyed.
He appears to have the same makeup, albeit with a different coloration, as several Rigel X aliens.

This Bajoran musician played on a woodwind instrument aboard Terok Nor in 2370.

When Intendant Kira Nerys entered Quark's, he asked her what he should play for her. (DS9: "Crossover")

This Bajoran was played by an unknown actor.
His dialogue was spoken when he was out of view and may have been spoken by a voice actor in post-production.
The
Star Trek Customizable Card Game gives his name as Javek Len.

This dabo girl was played by an unknown actress.

According to Bareil Antos, this drunken Cardassian was responsible for killing his lover, Lisea, with a disruptor, after a bar fight broke out where the two were eating. (DS9: "Resurrection")

A female Tellarite member of the Terran Empire rebellion was present on the planet Harlak in 2256. (DIS: "The Wolf Inside")

This rebel was played by an unknown actress.

When the ISS Enterprise crew was attempting to commandeer the Tholian-held USS Defiant, they destroyed a Tholian vessel and captured the pilot, beaming it into the ship's decon chamber. Phlox proceeded to torture the Tholian by lowering the temperature in the chamber until it gave them the location of the Defiant. When the Tholian later attempted to send a signal to its people, Phlox killed it by lowering the temperature until its carapace shattered. (ENT: "In a Mirror, Darkly")

This CGI Tholian was the first Tholian's full body form ever shown. The movement actor who "performed" the role during filming and provided the basic movements for this character was played by extra David Keith Anderson, who received no credit for his work.

These two Vulcan rebels from the mirror universe welcomed Bashir, Smiley, Ezri Tigan, and the Ferengi Quark, Rom, and Zek back aboard Terok Nor in 2375. (DS9: "The Emperor's New Cloak")

Both Vulcans were played by background performers, who received no credit for their appearance. 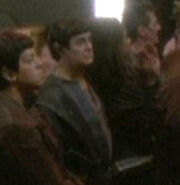 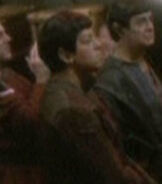 Played by Wade Kelley
Add an image to this gallery

These Vulcan servants served for Intendant Kira Nerys on the station Terok Nor in the mirror universe in 2370 and 2371.

The first two helped her out of the bath tub and dressed her in a gown. Later, they accompanied her to the party in Quark's. (DS9: "Crossover")

The latter two were present when the intendant told Jennifer Sisko about the death of her husband. (DS9: "Through the Looking Glass")

All four Vulcans were played by background actors who received no credit for their appearance. 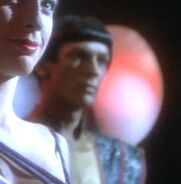 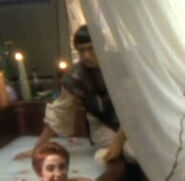 Played by an unknown actor
(DS9: "Through the Looking Glass") 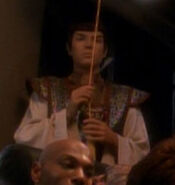 Played by an unknown actor
(DS9: "Through the Looking Glass")
Add an image to this gallery
Retrieved from "https://memory-alpha.fandom.com/wiki/Unnamed_mirror_universe_inhabitants?oldid=2571750"
Community content is available under CC-BY-NC unless otherwise noted.