The following is a list of unnamed musical instruments.

Adam's guitar was a musical instrument used in the 23rd and 24th centuries.

Adam played a six-stringed instrument similar to a guitar, but without a resonating body. (TOS: "The Way to Eden")

A similar instrument was played by the Edo on Rubicun III, and by Katie aboard the USS Enterprise-D; her instrument had eighteen strings, however. (TNG: "Justice", "When The Bough Breaks") 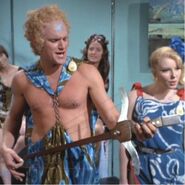 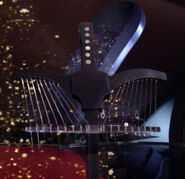 This Aldean musical instrument was an advanced device controlled by thoughts. The player put his fingers on certain pads on the instrument and simply felt the notes in his head. If done correctly, the instrument would start to glow in different colors and produce a melody that was similar in mood to the player's feelings and thoughts.

Melian, an aged Aldean musician, taught Katie, a child from the Enterprise-D, how to play the instrument when she was abducted by the Aldeans. (TNG: "When The Bough Breaks")

The Algolian musical instrument was a large instrument consisting of many small chimes that were struck with small wooden hammers, and played according to certain ceremonial rhythms.

An Algolian musician was aboard the Enterprise-D during the biennial Trade Agreements Conference and entertained the visitors of Ten Forward by playing his instrument.

Commander William T. Riker later transmitted the rhythm by subspace as a covert distress signal from the Ferengi Marauder Krayton whose crew had kidnapped him, as well as Deanna and Lwaxana Troi. (TNG: "Ménage à Troi")

The Bajoran cabasa was a small percussive instrument that played a role during Bajoran births.

For Bajoran women, it was important to be relaxed during birth, so the mother's relatives would play different instruments in a repeating rhythm to provide a relaxed atmosphere.

During Kirayoshi O'Brien's birth in 2373, the Bajoran woman Y'Pora, who was trained in childbirth, played a Bajoran cabasa. (DS9: "The Begotten")

The Bajoran gong was a small percussive instrument that played a role during Bajoran births.

For Bajoran women, it was important to be relaxed during the birthing process, so the mother's relatives would play different instruments in a repeating rhythm to provide a relaxing atmosphere. During Kirayoshi O'Brien's birth, his father Miles O'Brien played the Bajoran gong; he had trouble keeping up the rhythm, however. (DS9: "The Begotten")

The Bajoran harp was a small, four-stringed ritual musical instrument that resembled a crescent moon with bells strung across it.

Vedek Porta played the instrument on the promenade to call people inside the Bajoran temple for services. (DS9: "Accession")

The Bajoran lute was a type of musical instrument that was very similar to a Vulcan lute.

A trio of Bajoran musicians gave a small performance on Deep Space 9's promenade during the Gratitude Festival in 2371, one of whom was playing a Bajoran lute. (DS9: "Fascination")

The Bajoran percussion instrument resembled a combination of a xylophone and a drum played with small hammers.

A Bajoran musician played one of these instruments, accompanied by a Bajoran lute and a Bajoran woodwind instrument during the Gratitude Festival aboard Deep Space 9 in 2371. Odo was especially fond of the sound of those instruments. (DS9: "Fascination")

An apparent Bajoran percussion instrument called a Malaba drum was mentioned in the script of "Things Past".

The Bajoran rattle was a small percussive musical instrument that played a role during Bajoran births.

For Bajoran women, it was important to be relaxed during birth, so her relatives played different instruments in a repeating rhythm to provide a relaxed atmosphere.

During Kirayoshi O'Brien's birth in 2373, his mother Keiko O'Brien played a Bajoran rattle. (DS9: "The Begotten")

The Betazoid chime was a small, crystalline, octagonal instrument that was played with a little hammer.

On Betazed, it was customary to strike the chime during a meal to express gratitude for the food that is consumed. Homn struck the chime during a banquet aboard the Enterprise-D to celebrate the upcoming marriage between Deanna Troi and Wyatt Miller in 2364, (TNG: "Haven") and again the following year, when Captain Jean-Luc Picard was having a private dinner with Lwaxana Troi. (TNG: "Manhunt")

In a holographic re-creation of the Café des Artistes from the year 2342, a musician played an instrument that consisted of a small rectangular box with several glass tubes. (TNG: "We'll Always Have Paris")

The Enaran musical instrument was a telepathically controlled instrument from the planet Enara Prime.

The player had to put their hand on a glowing semi-globe and focus the thoughts. Depending on what they felt, a different melody would emerge.

Jor Brel mastered this instrument and taught Captain Kathryn Janeway telepathically how to play it. However, the feeling was a little overwhelming for the captain. Jora Mirell also composed music for this instrument. (VOY: "Remember")

A shape similar to the Klingon logo can be seen when the instrument is viewed from above.

The Gelrakian gong was seemingly used to signal the beginning of a trial by combat ceremony on Gelrak V.

In 2380, Gernba struck the gong to initiate trial by combat between Commander Jack Ransom and Vindor. (LD: "Temporal Edict")

The Gelrakian horn resembled a purple conch shell, and had light blue crystalline protrusions that glowed when the horn was blown. It was apparently used as a signal during battle.

In 2380, during a mission to Gelrak V gone awry, an away team from the USS Cerritos was met with a barrage of Gelrakian spears, followed by a Gelrakian blowing into a horn of this type. (LD: "Temporal Edict")

An alien musician played a percussion instrument at Quark's when it was re-opened after the Cardassians withdrew from Bajor and the station in 2369. (DS9: "Emissary")

An early script of "Emissary" described this instrument as a "strange triple keyboard"; in later scripts it was only called "strange instrument".

The Kriosian musical instrument was a large instrument from the planet Krios that was similar in appearance to an Earth xylophone.

A Kriosian instrument of this kind was part of the holographic re-creation of the Temple of Akadar that was to be the setting of the marriage between Alrik of Valt and Kamala of Krios.

According to composer Jay Chattaway, the Kriosian instrument was represented by a Balinese Gamelan instrument. The producers brought in real Balinese musicians to provide the piece of music heard in the episode. ("Memorable Missions", TNG Season 5 DVD special feature)

The Mataline II piano was a small, portable variant of an Earth piano. It produced sounds similar to those of a standard piano.

Nella Daren played a small-scale piano from Mataline II that could be rolled up for transport. The black keys were gold-colored on this model. (TNG: "Lessons")

This harp-like instrument was played by a musician on the planet Meridian in 2371. He later played the instrument again during the day and night. At night, he had several spectators listening to his music. (DS9: "Meridian")

The call sheets are listing it only as "musical instrument" in the props section.
The script described in scene 14 that the musician showed Miles O'Brien how to play this instrument. However, in the actual episode this is not O'Brien but a female Meridian. [1]

The Novans on Terra Nova created several musical instruments out of the skulls and bones of Diggers they had gutted in their gutting room. In 2151, Malcolm Reed listened to music performed by several Novans in their underground tunnels and caves. (ENT: "Terra Nova")

The script of "Terra Nova" identifies the musical instruments used by the woman and the man as skulls of diggers. The objects used by the three youths were identified in the script as "porous rocks." 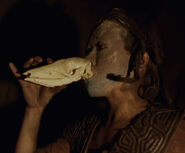 Athan with a bone

A girl with an instrument 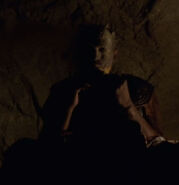 A man with an instrument

The wheel harp was a wheel-shaped, harp-like string instrument played by a follower of Sevrin. (TOS: "The Way to Eden")

A Risian lute was a musical instrument that was very similar to a Vulcan lute, and was played by Risians. (DS9: "Let He Who Is Without Sin...")

A Taresian chime was a small, octagonal, crystalline instrument that was struck with a small hammer.

The Taresian chime was a re-use of the Betazoid chime.

The Trill possessed two known types of pianos during the late 23rd and 24th centuries.

Varieties included a small piano-like instrument that could be easily transported, and a larger, stationary model. Joran Dax was a talented player of these instruments. (DS9: "Equilibrium", "Field of Fire")

Special bell carriers rang these bells during a Vulcan marriage, or during the kal-if-fee. (TOS: "Amok Time")

Commodore Oh, a Vulcan-Romulan hybrid who had infiltrated Starfleet, kept a set of Vulcan bells in her office at Starfleet Headquarters in 2399. (PIC: "Maps and Legends")