These are unidentified non-humanoid species observed in the 22nd century.

A number of creatures, both stuffed and represented by statues, were on display in a curio shop on the Akaali homeworld ran by the shopkeeper Garos. Some were placed on the wall and others under a bell jar. (ENT: "Civilization")

Like at least one other object of art in the shop, some of the statues might represent mythological rather then real creatures.
Three of the "Gargoyle"-like statues were later sold off on the It's A Wrap! sale and auction on eBay.
[1]
According to the props requirement section of the call sheet, the gargolye-like statue was simply described as a "broken antique figurine". 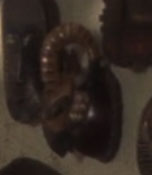 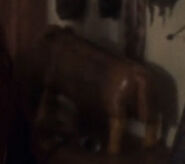 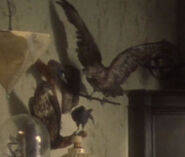 Another stuffed bird
Add an image to this gallery 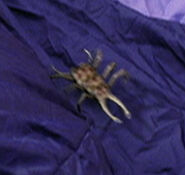 An arachnid
Add an image to this gallery
In the first draft script of "Strange New World", the Archer IV arachnid was referred to as "a scorpion-sized arachnid." The scripted description changed so that, in the final draft of the episode's script, the creature was instead described thus; "It's four-inches long, with a scorpion-like, segmented body." Also, in the first draft, the arachnids were established as being nocturnal and "half a dozen" of the animals were found in a cave by Charles Tucker, who proceeded to trample on them. However, this did not happen in the final draft, nor happens in the final version of the episode.

The skull of an unknown animal was found in the kitchen of the IKS Somraw. (ENT: "Sleeping Dogs")

The prop used to represent this type of creature was the skull of a red fox.

In the mirror universe, Phlox experimented on a mammalian-looking animal. (ENT: "In a Mirror, Darkly")

The reliquary of The monastery at P'Jem included at least two statues of horse-like creatures. Another bust was present outside of the monastery. (ENT: "Shadows of P'Jem") 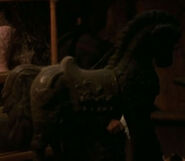 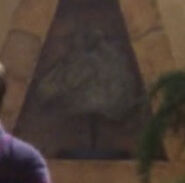 A bust outside
Add an image to this gallery

Apart from the trophies pictured, there were also at least two hides, a horn, and several more hard-to-see trophies.

Skull of a creature with a single, curled horn

Skull of a creature with a horn on its nose

Long horns
Add an image to this gallery

An appendage of the body

The large body covering much of its' homeworld

This sentient lifeform covered a wide surface area on its home planet. Smaller parts of the creature, identified as appendages, were able to survive independently from its main body while keeping at least some of its knowledge and intelligence. The lifeform was able to communicate verbally on a mathematical basis. (ENT: "Vox Sola")

In the final draft script of "Vox Sola", the symbiotic lifeform in that episode was initially described as "a fibrous, web-like organism" that "propels itself [...] with dozens of tendrils." From then on, the creature was most commonly referred to simply as "the organism" and it was scripted to undergo three different stages of growth in the course of the episode.

Actualizing the symbiotic lifeform in "Vox Sola" turned out to be a difficult challenge. The episode's director, Roxann Dawson, later recounted, "You go, 'How do we do something like this?' To have to create that was an extraordinary job, and it required all of the departments coming together to work." (Star Trek: Communicator issue 143, p. 33)

This symbiotic lifeform was built as a CGI model by John Teska at Foundation Imaging. Effects supervisor Elizabeth Castro recalled, "They did it practically on the set, and they also wanted it to have these CG tendrils reach out and pull people up and out of the frame; they wanted to see the tendrils flicking around. To enhance it they had a lot of goo, which they painted all over the practical model right before they would roll so that you would see bits dripping on the actors. That helped us to match the CG." (Star Trek: The Magazine Volume 3, Issue 7, p. 55)

The sounds of this symbiotic lifeform vocalizing had to be hurriedly created by sound editor James Wolvington, who explained, "Because the creature was all digitally animated, it meant that – relative to my deadline in the production process – I [learned] what this creature actually looked like very late. So in desperation – I have this bathroom adjacent to my sound studio and a shower stall – I wet my fingers and I kind of squeaked the glass and recorded that, and [digitally] manipulated that into some alien dialogue." (Star Trek: Communicator issue 147, p. 32)

In December 2154, Harrad-Sar served a member of this species aboard his ship. (ENT: "Bound")

Retrieved from "https://memory-alpha.fandom.com/wiki/Unnamed_non-humanoids_(22nd_century)?oldid=2282899"
Community content is available under CC-BY-NC unless otherwise noted.