The following is a list of unidentified non-humanoid species observed in the 23rd century. 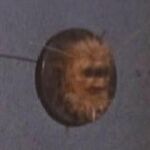 The stuffed head of an Alfa 177 dog-like animal

The Alfa 177 canine was a species of dog native to the planet Alfa 177. It was very similar to an Earth dog, with the exception of a horn on its head, a scaled backbone, a long hairless tail, and thin gold antennae sprouting from its head.

In 2266, a specimen of this species was brought aboard the USS Enterprise. After the transporter became infected with a yellow magnetic dust from the planet, the crew unknowingly tried to beam the canine back down to the surface of Alfa 177. The animal rematerialized as two different dogs: one, very gentle and shy, and the other very angry and dangerous, who would try to bite anyone who came near it, so that it had to be put in a box in the transporter room. After the crew came to believe that they had repaired the transporter, they tried reintegrating the two. Although the procedure itself appeared to be a success, the animal was found dead, possibly due to the shock of reintegration. (TOS: "The Enemy Within")

A stuffed head of an Alfa 177 canine was on display in Trelane's mansion on Gothos. (TOS: "The Squire of Gothos") Another one was owned by Kerner Hauze. (LD: "Kayshon, His Eyes Open")

This animal was originally to have been "a small, mild sheep-like creature," described that way in the first draft story outline for "The Enemy Within". There, the animal was described as being held and briefly petted by Kirk in the installment's teaser.

In a memo from Robert Justman to Gene Roddenberry (dated 8 April 1966), Justman admitted, "I feel we don't need this creature for two reasons. Firstly, I don't know how we create this creature, unless we take a dog and shave its hair off in some way or other to make it look different." The other reason for Justman's reluctance to accept the animal was that he felt its duplication by the transporter revealed to the Enterprise crew too early that the transporter was producing doubles of whichever individual went through it, a fact Kirk and Spock were attempting to hide from the crew later in the outline.

In the revised story outline of "The Enemy Within", this animal was initially described as "a small, gentle, dog-like creature." Also, it was still portrayed as being held and briefly petted by Kirk in the episode's teaser.

After reading the revised outline, Robert Justman devised a plan that would canonically account for the animal's similarity to a dog. In a memo he wrote Gene Roddenberry (dated 22 April 1966), Justman stated, "I finally solved my own internal problem with determining what the gentle creature is like that Kirk holds, which later appears in the story." Justman continued by proposing that, instead of making it an extraterrestrial animal, the writing staff could have the creature be one of multiple "Earth specimens" which were being collected by the Enterprise, having been deposited on the alien planet earlier in order to test how habitable the planet was. "Therefore, the small, gentle, dog-like creature which Kirk holds and pets briefly can, in actuality, be a dog," Justman suggested.

In two different scenes from the revised draft of the teleplay for "The Enemy Within" (submitted shortly before 1 June 1966), the aggressive double of the animal was described as "growling savagely with its fangs bared." In a later scene, one of the dog-like creatures was rematerialized, then wandered around, a glazed look in its eyes, before it suddenly collapsed in a heap.

By 1 June 1966, two identical-looking dogs were found to play the alien animal, the idea that it be a Terran dog having been dropped.

In a memo Robert Justman wrote John D.F. Black regarding a revised draft of the script of "The Enemy Within" (the memo was dated 1 June 1966), Justman pondered, "Do you think that something ought to be said in dialogue with regard to the small dog-like creature that North is carrying?" Later in the same memo, Justman remarked,

"It is very difficult for us to get two completely matching animals that we can change to make look like space dogs, and yet be trained enough in all respects to give us the varying responses that we need. The two matching dogs that we have found are odd looking enough, once they have been helped by Freddie Phillips. However, it just so happens that neither of these animals will really charge the camera, or anything else for that matter. We can get them to look as if they are snarling and get some barks out of one of them, but insofar as charging goes, I think we'd better throw that idea away. We might get a little bit, but not too much. Of course, we could solve part of the problems of this animal by establishing [...] that they have already tranquilized the vicious animal and it is available for work with the others in the Transporter Room. This also solves the problem of shooting the darn thing with a hand phaser and making the audience understand that we have just stunned it and not killed it. Also know you this, that every time we have to show the animal knocked out, it is going to cost us a hundred dollars for a veterinarian and an injection. This, in addition to the cost of rental of the animals and trainer's fees."

Another sequence that Justman, in the memo to Black, doubted the canine performers would be capable of was the weaving around with eyes glazed, then abruptly collapsing on command. As a result, Justman instead suggested the alien creature might be already deceased upon rematerialization. Justman also criticized a subsequent reappearance of the dog, asking, "Why do we have to see the dead dog in this sequence?"

The description of the animal in the final draft script of "The Enemy Within" (dated 8 June 1966) was exactly the same as that in the episode's revised story outline apart from omitting the word "gentle." By the time the final draft teleplay was written, the animal was held, at the start of the episode, by Sulu (who replaced the never-before-seen character of North during the episode's development) and was no longer to be held by Kirk in the teaser, but was briefly petted by him, precisely as happens in the episode.

In a letter of script notes from Spock actor Leonard Nimoy to Gene Roddenberry (dated 8 June 1966), Nimoy commented it was odd that "the death of the dog is connected only to Kirk's problem" and implied that he believed the dog's death should be more clearly connected, additionally, to the plight of the away team on Alfa 177.

The headpiece of the dog's costume was used for the sequence when the dog rematerializes dead, in the failed transporter attempt, and was later reused as one of Trelane's trophies.

According to Star Trek Maps (p. 22), the species name given to this animal was Canis Alfa.

In Star Trek Online, these animals are available as pets under the name Alfa 117 Canine. They come in a variety of colors including brown, grey, white, orange, green, blue, black, and pink.

This creature was capable of generating and controlling energy without causing itself harm. In 2267, Pavel Chekov listed it, the electric eel, and the giant dry-worm as examples of such creatures when attempting to understand the source of Apollo's power, but Leonard McCoy interrupted him before he could finish saying the creature's name, saying "not the whole encyclopedia, Chekov." (TOS: "Who Mourns for Adonais?")

A lifeform with two wings flew through the skies of Kaminar. (ST: "The Brightest Star")

A painting depicting this alien specimen with many small black eyes underneath two large eyes hung in Dr. Leonard McCoy's sickbay aboard the USS Enterprise for some time. (TOS: "The Enterprise Incident", "That Which Survives")

A space-borne lifeform vaguely resembling this painting was encountered by the crew of the Enterprise in the first issue of the non-canon comic book Star Trek: Early Voyages. The resemblance was probably coincidental.
According to the recreated production art[1] shown in the Star Trek Original Series Set Tour owner James Cawley, the painting was labeled as a "Denebian slime devil".

Omegan goats were a type of animal native to Omega IV. These mammals were characterized by shaggy white fur and two long horns on their foreheads. They were seen in a Kohm village. (TOS: "The Omega Glory")

Organian goats were a type of animal native to Organia that had shaggy blue hair. The goats were used by the Organians for farming and general labor during the late 23rd century. (TOS: "Errand of Mercy")

The production staff painted the goats' fur with green and purple paint to make them look more "exotic".

In a sewer through which a bounty hunter once dragged a Harcourt Fenton Mudd android, several roughly Stuart-sized insect-like creatures could be seen scurrying. (ST: "The Escape Artist") 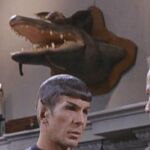 The head of two alligator-like creatures with pig-like ears hung on Trelane's wall in his 19th century house.(TOS: "The Squire of Gothos")

This humanoid bird was displayed at Trelane's mansion. (TOS: "The Squire of Gothos")

This creature was a costume originally used in TOS: "The Cage". It was in the unaired version and can be viewed here.

This large, aggressive, six-legged creature roamed deep in the forests of Vulcan's Forge on Vulcan. (DIS: "If Memory Serves")