The following is a list of unidentified non-humanoid species observed in the 24th century.

An alien lifeform seen on a viewscreen depicting data from the Enterprise-D library computer. (TNG: "The Last Outpost", "Datalore")

The Banea used an artificial lifeform as a host for implanting memory engrams in the minds of convicted murderers. This was part of a punishment which caused the perpetrator to periodically relive the event from the point of view of the victim. (VOY: "Ex Post Facto")

On the coastal regions of this planet, cries of this unseen animal could be heard in the background. (DS9: "Rocks and Shoals")

Many scenes of this episode were shot outdoors in the Sun Valley region near Los Angeles. The noises that could be heard in the audio were actually seagulls.

Footprints and corresponding cell samples of several species were stored in the library computer of the Enterprise-D. Samples of at least five alien species were compared to the footprints and cell sample of the Tarchannen III species prior to its discovery. None of the samples was similar to the Tarchannen III lifeform however. (TNG: "Identity Crisis")

While stranded on Goralis III in 2375, Worf killed a large furry mammal, somewhat similar to a wolf, for food. Worf also mentioned the planet having predators that might pose a threat to him. (DS9: "Penumbra")

The stylized image of a possibly reptilian or saurian creature with a unicorn-like horn could be seen on an Alpha Quadrant terrorist communicator and as a badge in use by two Delta Quadrant species, the Mari and the Ledosians. (TNG: "Starship Mine", VOY: "Random Thoughts", "Natural Law")

A Delta Quadrant Mikhal Traveler claimed to have landed on a moon only to have discovered (after sustained moonquakes) that it was actually a creature, a living being so massive it generated its own gravitational field and so immense that it supported its own ecosystem. Another traveler, who had visited the system in 2373, expressed skepticism, as his sensors had not picked up anything like that. (VOY: "Darkling")

Close up
Add an image to this gallery

The New Earth primate was an intelligent but non-sentient primate species native to the planet called "New Earth."

Kathryn Janeway attempted to communicate with the primate during her brief stay on the planet in 2372, claiming she sensed intelligence in it. However, Chakotay doubted it could be domesticated. (VOY: "Resolutions")

Alan Sims was responsible for casting this primate. When the script called for an alien primate, Sims found a spider monkey which, on command, could walk on its hind legs with its tail erect. "At first Rick Berman just laughed. He couldn't believe that a spider monkey – which you could find in any zoo – would look convincingly alien. But when I showed him photographs of what the monkey could do, he said, 'That looks alien enough to me. Book him!'" (Star Trek 30 Years, p. 46)

These non-corporeal aliens were powerful aliens on an extended mission exploring the galaxy who visited Deep Space 9 in 2369, after following a ship through the "hole in space" from the Gamma Quadrant. They apparently gave off notable thoron emission levels.

They observed the Deep Space 9 inhabitants for a while and then started making their imagination real to explore the concept, calling it unique. They took the forms of characters familiar to the crew, like Rumpelstiltskin, Buck Bokai, and Jadzia Dax. (DS9: "If Wishes Were Horses") 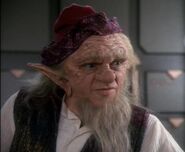 An alien as Rumpelstiltskin 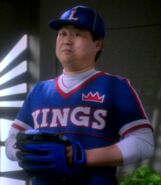 An alien as Buck Bokai 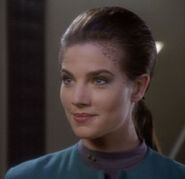 An alien as Jadzia Dax
Add an image to this gallery

When Kathryn Janeway struggled for her life after a shuttle crash in 2373, The Doctor treating her detected an alien presence in her Cerebral cortex.

This alien was causing Janeway hallucinations, in which he tried to convince her that she had already died, and needed to let go and cross over in an afterlife called the matrix. To achieve this, he posed as Janeway's deceased father, and claimed it to be a place of joy and wonder.

Janeway was skeptical, and eventually managed to have him reveal that this is what his species did, and ultimately that he wanted her to go into the matrix so she could provide him with nourishment. With her firmly refusing to cross into the matrix, the alien became "dislodged". However, the alien promised he'd wait for her and she'd see him again when she finally died.

After the event, Janeway was left with questions about if his realm was indeed some type of afterlife, if this event species accounted for near-death experiences, and if the species was confined to the Delta Quadrant. On the latter question, Chakotay was convinced he must be. (VOY: "Coda")

These aliens, encountered on Rigel IV, were displayed on viewscreens depicting data from the Enterprise-D library computer. (TNG: "The Last Outpost", "Datalore")

These drawings are from the Spaceflight Chronology. In the book, these images are presented as drawings of aliens encountered by the first Humans to visit Rigel IV. Only the encounter with the creature on the left was given by the captain in his log. He found the creature somewhat reminiscent of a porcupine. Its tentacles were waving in the air in anger, as a Rigellian jeweler was refusing to sell a large diamond to the creature for the amount it was offering for the jewel

Several animal species lived on the landmass of the planet Ruah IV as of 2369. (TNG: "The Chase")

The label on Slug-o-Cola bottles featured an image of an apparently man-sized, slug-like tentacled creature, gorging on the cola. (DS9: "Profit and Lace")

The Soukaran iguana was a type of lizard native to the jungles of the planet Soukara. (DS9: "Change of Heart")

These two creatures made mating calls to each other as Jadzia Dax and Worf traversed the jungles of Soukara in 2374. Upon hearing them howl together after calling and responding, Dax mused, "Another happy couple." (DS9: "Change of Heart")

These creatures were only heard, never seen.

Several skulls which appeared non-humanoid were in evidence on a Hirogen trophy wall in 2374. (VOY: "Hunters")

A large skull was hanging in a net aboard a Hirogen warship in 2374. It was from a lifeform which was previously hunted down by the Hirogen. (VOY: "Prey")

This marine lifeform was encountered under the surface of "The Waters" at a depth near 600 kilometers. The creature, which was likened to the electric eel found on Earth, was significantly larger and more powerful that the Earth counterpart, as it emitted biothermic discharges that exceeded 500,000 volts. (VOY: "Thirty Days")

Retrieved from "https://memory-alpha.fandom.com/wiki/Unnamed_non-humanoids_(24th_century)?oldid=2446184"
Community content is available under CC-BY-NC unless otherwise noted.