These plants were seen on the surface of Alastria. (VOY: "Prime Factors")

These plants and flowers were seen as decorations on Aldea in 2364. (TNG: "When The Bough Breaks") 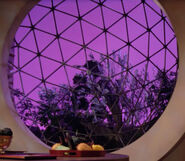 Trees and plants outside of the building 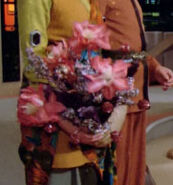 Flowers brought as a gift

These psychotropic compound-producing flowers were native to Archer IV.

These flowers released a toxic pollen with a high concentration of tropolisine, causing symptoms of hallucination, paranoia, and lack of cognitive function. (ENT: "Strange New World")

A cluster of fruit-bearing trees grew on a planet with a desert environment. Ensigns Beckett Mariner and Bradward Boimler were initially relieved to find the tree while seeking water when they were temporarily stranded on the planet in 2381. However, their enthusiasm immediately faded when they found that the liquid inside the fruit tasted similar to black licorice, which neither of them liked, but they continued eating it regardless, as their options were severely limited. (LD: "Where Pleasant Fountains Lie")

This flower grew on the planet Dedestris. It only bloomed in the moonlight. Gathorel Labin offered Kathryn Janeway a scarf made from a material composed of its petals, which was considered Exquisite and very delicate. (VOY: "Prime Factors")

A holographic program of the Denubian Alps was created as a field trip aboard the Enterprise-D in 2364. The landscape featured several trees and bushes without leaves as well as fir tree-like plants. (TNG: "Angel One")

The following plants were used as decorations in different quarters and guest quarters aboard the Enterprise-D. 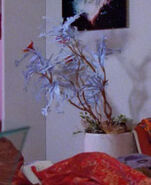 A tree in the guest quarters
(TNG: "Lonely Among Us")

A red leaved tree in Beverly Crusher's quarters
(TNG: "Lonely Among Us")

A collection of green plants in Beverly Crusher's quarters
(TNG: "Lonely Among Us") 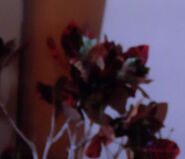 A collection of green plants in William T. Riker's quarters
(TNG: "Lonely Among Us", "Haven") 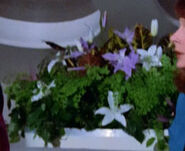 Plants and flowers in Picard's quarters
(TNG: "The Battle")

A tree in the guest quarters
(TNG: "Haven", "Too Short a Season")

A green palm-like tree in the guest quarters
(TNG: "Haven")

A small plant in the guest quarters
(TNG: "Too Short a Season")

A flowered tree in the guest quarters
(TNG: "Too Short a Season")

A green plant in the guest quarters
(TNG: "Heart of Glory", "The Neutral Zone")

A red-green leaved tree in the guest quarters
(TNG: "Symbiosis") 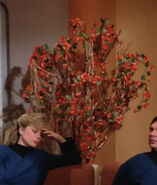 A red/green tree in the guest quarters
(TNG: "The Neutral Zone")

A green plant outside of the guest quarters
(TNG: "The Neutral Zone")

A flowered plant in the guest quarters
(TNG: "The Neutral Zone") 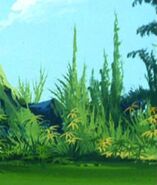 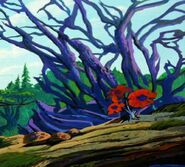 This plant was the source of the addictive drug felicium. It only grew in the remote areas of Brekka. Its cultivation, harvest, and purification was both difficult and expensive. (TNG: "Symbiosis")

This flower bouquet was replicated by Tom Paris in 2374 as a present for B'Elanna Torres and an excuse for canceling the date last night. He held the flowers when he used the site-to-site transport to beam directly into the Jefferies tube where Torres was working. (VOY: "Scientific Method")

The call sheet for the day of filming listed the flower bouquet simply as "flowers".

Two types of unnamed plants were found in the crew quarters aboard the SS Tsiolkovsky in 2364, frozen like the rest of the interior. (TNG: "The Naked Now")

A frozen plant behind a chair

This type of plant was found in the shallow water near the lakefront on Hima.

In 3188, speaking the Kwejian language, Cleveland Booker persuaded one of these plants into appearing above water, so he could squeeze a healing liquid from one of its leaves. After passing this liquid into Michael Burnham's hand, she used it for treating a gunshot wound on her left arm. (DIS: "That Hope Is You, Part 1")

Several unnamed plants appeared in holographic programs such as the funeral setting for Natasha Yar and the recreation of the Café des Artistes in 2364. (TNG: "Skin of Evil", "We'll Always Have Paris")

Some trees and yellow flowers

An Invernian herb was a medicinal herb located in remote areas of Invernia II.

In 2351, a young Julian Bashir and his father witnessed the death of an Invernian girl who, unknown to them, could have been saved by the Invernian herb. This incident led Julian Bashir to a career in medicine. (DS9: "Melora")

A large plant was given to Voyager as a gift by alien dignitaries while the vessel was docked at the Markonian outpost. According to Janeway, it grapped her when she tried to water it. Later, one of branches grapped on to Janeway's hair. (VOY: "Survival Instinct")

While performing anomaly consolidation duty aboard the USS Cerritos in 2381, Ensigns Beckett Mariner, Samanthan Rutherford, and D'Vana Tendi went into Lab 4005, which contained plants of various species. One such plant was smelled by Tendi, who invited Mariner to smell its flower, only for the plant to spray thorns into the latter's face, which had to be pulled out by the former. (LD: "The Spy Humongous")

Several flowering bushes and leafy plants were native to Lactra VII. (TAS: "The Eye of the Beholder")

The flora on Lactra VII

This exotic plant from Ledonia III shared its environment with a mycorrhizal fungus that helped it to retain water. Without the fungus, the plant would quickly die. (DS9: "The Wire")

Several plants, flowers, and trees were native to the planet Ligon II. (TNG: "Code of Honor")

The flora around Lutan's centerplace 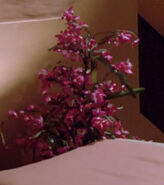 A plant with flowers

A green plant and flowers

The surface of the planet Minos featured several types of plants, trees, bushes, and flowers. (TNG: "The Arsenal of Freedom")

The city and the surrounding alleys of the marketplace on a planet in the Delta Quadrant featured several green bushes, trees, and plants. (VOY: "Resistance")

Green plants and a tree

These types of unnamed plants were set as decorations in the observation lounge aboard the Enterprise-D. 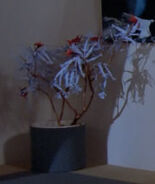 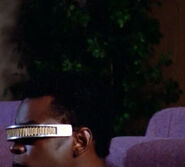 A tree with green leaves
(TNG: "When The Bough Breaks", "Home Soil", "Coming of Age")

This plant was a pear-like fruit indigenous to Orellius.

A few years before 2370, colonists living on Orellius discover this fruit growing along a riverbank. The colony leader Alixus believed the fruit was "lovely".

In 2370, Alixus offered this fruit as breakfast to Benjamin Sisko, who had spent the night on watch duty. (DS9: "Paradise")

Plants aboard the Enterprise-D

Beside the quarters and the observation lounge and sickbay, several other rooms aboard the ship featured plants. Some were also placed in corridors. 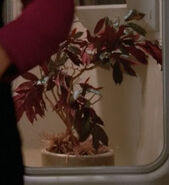 A small tree
(TNG: "Encounter at Farpoint", "Hide and Q")

A small tree in the dining area
(TNG: "Where No One Has Gone Before")

A red-green leaved tree in the starboard lounge
(TNG: "Justice") 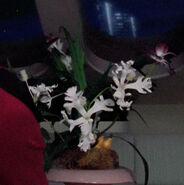 A plant with white flowers in the starboard lounge
(TNG: "Justice")

A plant with flowers in the starboard lounge
(TNG: "Justice")

A green plant in a corridor
(TNG: "Justice") 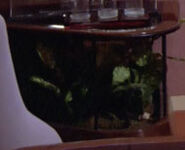 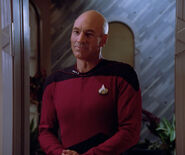 A green plant in the dinner room
(TNG: "Haven")

A green-red plant in the dinner room
(TNG: "Haven")

A red plant in the dinner room
(TNG: "Haven")

A small tree in the schoolroom
({{TNG|When The Bough Breaks}})

A flowered twig, a gift by Alexandra
({{TNG|When The Bough Breaks}})

A flowered plant placed in the corridor
(TNG: "Symbiosis")

Plants on Angel I

On the planet Angel I several green plants and trees surrounded the buildings. Inside the buildings several plants were placed in bowls. (TNG: "Angel One") 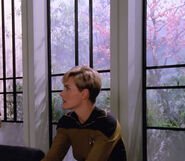 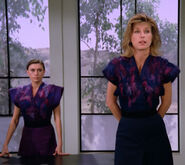 One of several trees inside the main chamber

A plant in one of the guest quarters

Flowers in the guest quarters

The planet Rubicun III, homeworld of the Edo, featured many plants, trees and green on its surface. Some were planted in bowls and displayed in the court hall of the main building. (TNG: "Justice")

Green trees and plants around a building

Trees and flowers, some are protected

Trees and plants surrounding a pond 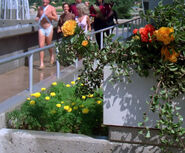 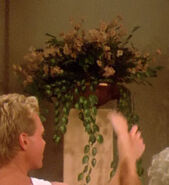 A bowl with plants 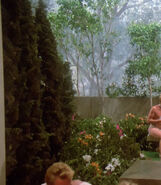 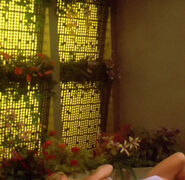 Doctor Phlox kept several green plants in sickbay aboard Enterprise NX-01 for his animals. Some of them were placed in the cages. (ENT: "The Catwalk", "Regeneration")

Several plants and flowers in cages

These plants decorated the waiting area and the CMO's office of the sickbay aboard the Enterprise-D in 2364.

A plant with white leaves
(TNG: "Encounter at Farpoint", "The Naked Now", "Where No One Has Gone Before", "Haven", "Datalore", "Angel One", "Symbiosis", "We'll Always Have Paris") 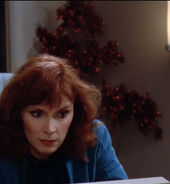 A red tree
(TNG: "When The Bough Breaks")

A thin plant with green leaves
(TNG: "The Neutral Zone")

These plants and flowers were placed in corridors at Starfleet Headquarters and in the surrounding green places. (TNG: "Conspiracy")

In 2365, Commander William T. Riker was attacked by the rhizomatic predatory vine native to the planet Surata IV. Its thorns contained microorganisms, later named as Surata IV microbes. These microbes possessed elements of both a bacteria and a virus, and were designed to infect the nervous system of warm-blooded animals. (TNG: "Shades of Gray")

This hybrid of a symbiogenetic alien orchid from the Delta Quadrant, as well as a prize-winning chrysanthemum and a garden-variety clematis, was created in a 2372 transporter experiment aboard USS Voyager. (VOY: "Tuvix")

This plant grew at Terrasphere 8 in a holographic re-creation of the Starfleet Academy grounds. It's bloom was gathered by the groundskeeper Boothby with a garden clipper. He then smelled at it. (VOY: "In the Flesh")

The call sheet features the note for the art department, "Exotic flowers/garden".

The spaceport and the shopping mall at Farpoint Station housed several sorts of trees when the crew of the Enterprise-D visited this place in 2364. (TNG: "Encounter at Farpoint")

A tree with white leaves 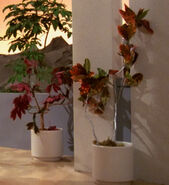 The planet housing the Vulcan monastery at P'Jem featured several plants, bushes, and trees on its surface. (ENT: "The Andorian Incident")

Several trees around the monastery

Trees and bushes next to the monastery

Several plants and trees in the doorway of the monastery

Different green- and red-leafed trees were planted in front of the Vulcan Science Academy in 2249. (DIS: "Lethe")

Two people sat beneath a large plant at Yorktown in 2263 of the alternate reality.

Small palm-like trees with purple stems could be found outside the space where James T. Kirk celebrated his birthday. (Star Trek Beyond)